Tsara Romanyaske and the geopolitical game against Russia 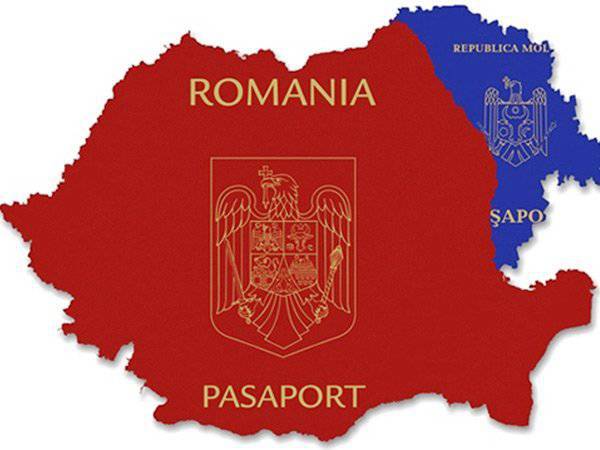 Against the background of the new pro-Western Ukrainian “Maidan”, the fact that cooperation agreements with the EU were signed by two other post-Soviet republics, Moldova and Georgia, was completely overlooked. And if everything is more or less clear with the latter, then in Moldova it is not so simple. Is it possible that the “mare of the Unior”, about which the unionists have long spoken, will happen under the auspices of Brussels? Chisinau after a long break, returns to foreign policy, taken at the beginning of the 90-s? And what should Transnistria do - let it be a sovereign republic, but, nevertheless, united by cultural, economic and kinship ties with the Right Bank?

It's no secret that the European Union serves as a tool for Eastern European irredentists. Budapest has already announced the reunification of almost all Hungarians as part of a single state, but the truth is: if you are Slovak, Romanian Hungarians, there are no borders with Hungary for you, and everyone’s rights are equal. So Romania is following in the footsteps of its western neighbor: the Moldovan alliance of liberals made it a colony of its native country with a sly hand. And can Moldova be considered the birthplace of Lupu, Ghimpu, Filat and the like? Almost all the top leadership of the republic have long called themselves Romanians, and they are such on the passport. Judges of the Constitutional Court of Moldova, which 5 of December recognized as the state language of the country Romanian, all until the last have Romanian citizenship. Perhaps the case of Moldova is unprecedented, and in the world stories It is difficult to find examples when the state would be ruled exclusively by foreigners. This model of power is more like an occupational regime. True, so far the Constitution states that the state language of the country is Moldovan, not Romanian. But it seems that this little problem will be solved very quickly, taking into account how rapidly events are developing.

As a sign of agreement with the “right course” of the alliance, thousands of demonstrators arrived in Chisinau with flags of the European Union and Romania. True, the liberals preferred to keep silent about the fact that they collected these people by force, several from each village. In response, the Communist Party, led by former Moldavian President Vladimir Voronin, organized its rally, by the way, more numerous than the pro-Western one. Fortunately, demonstrations and counter-demonstrations in Moldova did not turn into such large-scale pogroms as in Ukraine.

John Kerry, the next “peace envoy” from the White House, also arrived to support the Euro-Liberals. It was planned that Kerry at that time was supposed to be in Kiev; but, trying to hurt Viktor Yanukovych, who refused to cooperate with the EU, the American diplomat abruptly changed his route and left for a more accommodating Chisinau. Kerry’s meeting with the Moldavian liberals was rather symbolic, the parties abstained from discussing serious issues. However, a strong Romania is beneficial to the United States, primarily due to the fact that Russia’s position on the Balkan Peninsula and in the Eastern Mediterranean is not to be restored.

Meanwhile, Transnistria and Gagauzia fear a new upsurge of Romanian nationalism. In the summer of this year, Moldovan drones were first seen in the sky over Tiraspol - the last time the Moldovan air force conducted air reconnaissance over the territory of Transdnistrian Moldavian Republic at the beginning of 90's, so six months ago, a breach of calm became a landmark event. At the same time, Chisinau actually allowed Bucharest to introduce Romanian special forces into Moldova. One can imagine the purpose for which this was done, taking into account the fact that Transnistria and Gagauzia are legally considered parts of Moldova.

Despite the multinational composition, the TMR is traditionally oriented towards friendship with Russia. The union with Ukraine is not an option: in 2006, about 60, thousands of Ukrainian citizens living on the right bank of the Dniester, found themselves in a blockade on the initiative of their own Ukrainian government. So, the duplicity of Kiev, its lack of understanding of the situation in Moldova and the reluctance to play the role of a peacemaker themselves separate Transdniestria from Ukraine and turn it into an exclave of Russia - a sort of southern Kaliningrad.

However, Tiraspol is also happy: the head of Transnistria, Yevgeny Shevchuk, decided to introduce Russian laws in the country, thus making the Transnistrian Moldavian Republic a member of the Customs Union. According to Shevchuk, this will protect Transnistria from the influence of the European Union and Romania. However, such actions will also bring economic benefits: Transnistrian entrepreneurs, as well as the country's largest corporation “Sheriff” are focused on Russia and Ukraine. Creating an impenetrable customs barrier on the eastern borders of Moldova would have led to the collapse of the already weak Transnistrian economy.
Meanwhile, in Gagauzia, the problem of the Customs Union is more balanced. The trade wars of Russia and Moldova hit the Gagauz agrarians painfully - not only on winemakers, but also on producers of other agricultural products. Despite the big harvests of recent years, the closure of the Russian market forced many Gagauz farmers to work not for profit, but for the sake of survival. Only Turkish investments were able to save the economy of Gagauzia: unfortunately, the Kremlin acts too carelessly and harms its potential allies, because of which it sometimes loses initiative in foreign policy. Now, due to Moscow’s fault, the possibility of cooperation with Turkey, Northern Cyprus and Azerbaijan has recently attracted Orthodox Gagauzia more than joining the Russian Customs Union. The same can be said about Bulgarians living compactly in the south of Moldova: the Bulgarian community has also suffered from Russian sanctions, and is waiting for support from Sofia, that is, from the European Union. But, until the last years, the Bulgarians and the Gagauz were the best pillars of Russia in Moldova - even more reliable than Transnistria under Igor Smirnov. However, if Chisinau wanted to join the Customs Union, the whole south of Moldova would support such an initiative in a united front.

The same can be said about the north, including Balti - the second largest city of the republic. There, Russians make up the majority, and although during the war years they did not take up weapon, but Russia has always been ardently supported.

Speaking of Moldova, another nuance should be taken into account: the majority of the population consider themselves to be Moldovans, and are opposed to joining Romania. The situation in Moldova did not become similar to the situation in the Baltic countries because the nation itself in 1989-1991 turned out to be split into three parts. The first - Russians, Ukrainians, Gagauz, Bulgarians, the so-called Moldovans, “shantists” - advocated the preservation of a multiethnic state. The second - supporters of Moldavian nationalism - was in the position of preserving a sovereign Moldova, independent from both Russia and Romania. Finally, the third part - the so-called unionists - denied the existence of the Moldovan people and advocated the accession of Bessarabia to Romania. All three currents are hostile towards each other; and only this saved the Russians and Ukrainians from conferring on them the status of “non-citizens”. In addition, the municipal revolution on the left bank, better known as the Transnistrian conflict, played a big role: whatever one may say, it’s difficult to name the events in Moldova as an inter-ethnic confrontation, because Moldovans fought against Moldovans, while in Chisinau and Balti with the predominant Russian population of fights did not have.

Thus, Russia has every chance to keep Moldova in its sphere of influence. Residents of Transnistria, Gagauzia, the south and north of the republic support Moscow. For Romania - only a homogeneous center by nationality. The kinship ties of the left bank Moldovans with the residents of Transnistria, Ukraine and Russia serve as a guarantee that the people of Moldova will retain Russia's loyalty for at least one more generation. Another thing is that the power in the country is seized by the citizens of Romania, ranging from the president to the Constitutional Court.

Why we are not interested in the "key" from the Balkans and the Mediterranean?

And this, by the way, is part of a strategy for squeezing Moscow out of Eastern Europe. After all, as is known, the “Danube is the gate of Europe,” and those who control the lower reaches of this river, own the keys to Asia Minor, the Caucasus and the Middle East. The current conflict in Moldova should be considered in conjunction with the Nabucco and South Stream projects, as well as the supply of liquefied gas from the Gulf monarchies to the ports of Bulgaria and Romania. Do not forget about the transportation of products of Russian enterprises of heavy industry along the Danube. It is not for nothing that Turkey is showing an increased interest in Gagauzia, trying to outrun Russia, and Romania is hindering Ukraine’s construction of shipping canals, ready for round-the-clock continuous passage of cargo ships in two directions at once. We are talking about friendship with Serbia - but how to be friends with it, if the road to the Balkans, which runs through Moldova, is closed?

Possessing only Novorossiysk and Sevastopol is not a guarantee of the protection of Russian interests in the Black Sea and the Eastern Mediterranean. In order to truly establish ourselves in Eastern Europe and the Middle East, we must necessarily take possession of Moldova and the Danube Delta, and only then will we be able to dictate our own rules of war and commerce in the Caucasus and Turkey. And in order to achieve this goal, one must rely not only on Transnistria, but also on Moldova - its citizens are too tired from the continuous political crisis that lasts from 2009, and do not want to give their country to Bucharest, bearing in mind the bloody Khotyn, Bendery and Tatarbunar uprisings , about the 1941-1944 invasion, about the revenge attempt in 1989-1992. The last time the bloodshed was stopped by the famous General Alexander Lebed, probably the most revered person on both banks of the Dniester. Unfortunately, in the event of aggression, now Transdniestria will intercede only in words, and forget about the rest of Moldova. After all, for some reason, Bessarabia has become uninteresting to us, although everything should be exactly the opposite, and popular discontent in Moldova only deigns to restore our positions in this country.

Ctrl Enter
Noticed oshЫbku Highlight text and press. Ctrl + Enter
We are
Memo to mercenaries in AfricaNew US Democratic Approach in Moldova: Unite and Conquer
96 comments
Information
Dear reader, to leave comments on the publication, you must to register.