The prince is often in Moscow

December 11 2013
65
3 December on the site of the President of Russia There was a short report that Vladimir Putin received in Saudi Arabia the Prince of Saudi Arabia Bandar bin Sultan in Novo-Ogaryovo. The note said that the parties discussed the situation in the Middle East and North Africa and, among other things, noted the positive dynamics in resolving the Iranian nuclear issue. Also, the Prince and the President of the Russian Federation exchanged views on the situation around Syria, referring, among other things, to preparations for the “Geneva-2”. This is all that is officially known about the negotiations. 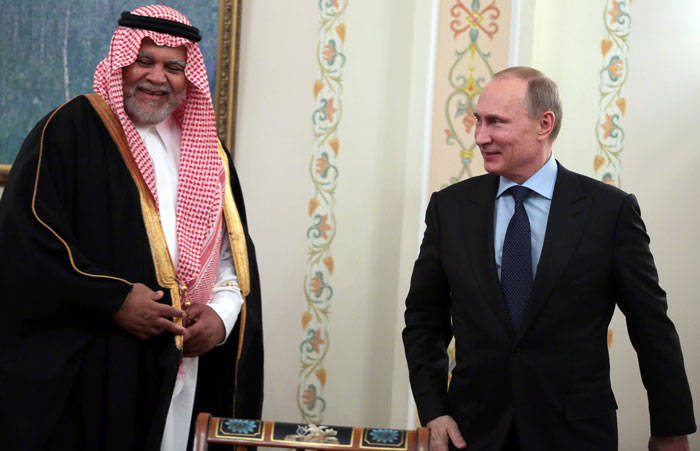 The background of these latest negotiations is extremely complex. First of all, for Saudi Arabia. That is why the prince, the chief scout of the kingdom, and often paid visits to Putin. The United States and the West in general are retreating from Syria, changing their line, but the Kremlin keeps the brand as before. Even Qatar today - and that maneuvers, offering Syria to restore diplomatic relations, and there and give money to restore the destroyed country. The United States abandoned the idea with the Tomahawks, and the aggressive British Prime Minister Cameron had not yet been supported by his native parliament. Assad is supported by internal Kurds (militias), and Hezbollah and Iran from outside. According to the latest reports News, the Syrian army regained control of the Damascus-Homs strategic highway. This will allow the removal of chemical weapon to Latakia. That is, conditions are being created for the consistent chemical disarmament of Damascus. The successes of the government forces in Syria are such that the “moderate opposition” (SSA) has started talking about the likely unification with the Assad army - in order to jointly oppose Islamist militants from terrorist groups that are going to build Sharia in Syria, and for the time being are kidnapping, kidnapping, robbery . Guns and money militants receive just from the Saudis.

The other day, the United States admitted that terrorist groups were operating in Syria, but in order not to offend Riyadh, they placed the blame on the al-Qaeda cells on ... Assad. State Department spokeswoman Marie Harf told reporters: “This is because of the situation created by the regime itself. The brutal suppression of peaceful protests has just created the conditions for the prosperity of Al-Qaida-affiliated groups in Syria, for the actions of terrorists. ”

It is clear that at the forefront of democratic Riyadh, with which Washington wants to maintain allied relations, it would not be desirable to dump the phenomenon of bearded men in Syria. Moreover, Saudi Arabia recently disassociated itself from the United States, as they say, in full - even the US Secretary of State John Kerry’s visit in November did not help, assuring Foreign Secretary Prince Saud al-Faisal that Washington considers relations with Riyadh to be strong and durable . The Saudis are still outraged by the White House’s refusal from the military operation against Syria (and Riyadh offered to sponsor this operation), as well as being outraged by the Six’s agreement with Iran. Hence the union of Riyadh and Tel Aviv (Israel is also dissatisfied with the state of affairs in the Middle East). As for Assad's “guilt” in the appearance of terrorists, this “gingerbread” does not soften the blow of the whip. Monarchist Wahhabis feel bad about Shiites; the first really want to crush the second. To do this, in Jordan on the Saudi money trains today 50-thousandth army. But it is doubtful that Riyadh decided to erase the borders in the Middle East in such a way. Until the Washington, London and Paris, the Saudis are far away.

The blogger and analyst El Murid said in an interview "Free Press"that the talks at the talks between Putin and bin Sultan could have been about certain political agreements.

In exchange for his guarantees, the prince would like to participate in the process of separation of powers in Damascus. Apparently, El Murid believes, Saudi Arabia has agreed that the Geneva-2 will take place. The conference will trade for Syrian ministerial portfolios. Hence, Prince Bandar’s task is to get Putin to give one of the power ministries to the Syrian opposition: either intelligence or Al-Mukhabarat.

So what is this, surrender to Syria? Hardly.

"It's a difficult question. We, like the Saudis, are not satisfied with Iran’s excessively strengthening in the Middle East, so that it remains the sole master of the situation in the region. Russia is interested in creating a counterweight to Tehran, and therefore destroying the position of Saudi Arabia is completely out of hand.

A more difficult game is possible here than just surrendering Syria. We will certainly not hand it over. But at the same time, we do not want Tehran’s positions in Damascus to be comparable with ours. Therefore, we can easily allow Saudi Arabia to Syria through the Saudi-controlled Syrian opposition. And try on the contradictions between Riyadh and Tehran to stand their own game. "

What kind of game is it?

“Tehran wants to stretch the gas pipeline to the west. A year ago, the Iranians announced the construction of a Iran-Iraq-Syria gas pipeline with the prospect of connecting it with the Egyptian gas pipeline Arab Gas Pipeline. The design capacity of the Iranian gas pipeline is 40 billion cubic meters of gas per year, which is comparable to our Nord Stream (55 billion). Moreover, out of these 40 billions of “cubes,” Iranians are planning to sell 30-35 billion directly in the Middle East — to Iraq, Syria, Lebanon, and Turkey. This is a lot of money. ”

The other day, we add, the SSA commander, General Idris, publicly refused to leave Bashar al-Assad before the talks in Geneva. Now it is no longer an indispensable condition for the participation of moderate opposition in the conference. Idris clarified that the withdrawal could occur “at the end of the negotiation process” when the SSA will join forces with the government army in order to stand against the Islamic militants in a united front.

In this scenario, the forces of Riyadh is unlikely to wait for indulgences from the Kremlin. The end of the “negotiation process” can be delayed until the 2014 year - right before the presidential elections in Syria. And there the Syrian people will decide who will be the next head of state.

The concession to political blackmailers is the lot of the weak. It is impossible to imagine that Putin will be led by Prince Bandar (if the speech at the meeting in Novo-Ogaryovo was generally about the Olympics). Mr. Obama did not yield to the Republicans from Congress at the time when the government was "turned off", and Putin will succumb to the "guarantee" of the prince?

Observed and commented on Oleg Chuvakin
- especially for topwar.ru
Ctrl Enter
Noticed oshЫbku Highlight text and press. Ctrl + Enter
We are
Geopolitical mosaic: Prince Bandar may be fired, Snowden became a university rector, and McFaul thinks Putin looks like ObamaResults of the week. "I'm not guilty! He came himself! ”
65 comments
Information
Dear reader, to leave comments on the publication, you must to register.