The company SET-1 has provided special forces with new means of covert surveillance. 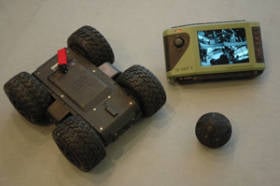 The company SET-1 has developed new covert surveillance tools designed for use by special forces soldiers. As reported by the correspondent. ARMS-TASS, General Director of the company Sergey Efremenkov, currently SET-1 is marketing two main models to the market - the Scarab set and the Sphere ball.


As the head of the company explained, the Skarab surveillance and intelligence system is designed to collect audio and video data in high-risk areas. It transmits data using a radio channel to the control panel into which the 7-inch (17,78 cm) display is integrated.

The Scarab kit consists of a wheeled platform with built-in high-resolution cameras, a thermal imager, a microphone, and audio and video transmission media. Video data is transmitted using a wireless communication system that ensures reliable operation even in poor signal conditions. The Scarab uses Cordon receivers and transmitters (CORDON) with orthogonal frequency division multiplexing (COFDM), which are manufactured by SET-1.

According to experts in the field of special operations, the main features of the Scarab platform are: high traffic, all-wheel drive, high-definition video cameras, powerful white and infrared LED lights, automatic image rotation on the control panel display if the platform overturns when movement, the presence of various radio frequency channels, built-in microphone.

The source of energy is a rechargeable lithium-polymer (Li-Pol) battery, which provides at least 45-minute use of the Scarab platform.

The control system allows you to receive and show video data at a distance of up to 300 m, listen to the sound using the built-in speakers or connected headphones. A special curtain is built into the control panel to neutralize the sun glare on the screen.

As S. Efremenkov explained, the whole system is transferred to the Pelikan case (PELICAN), which provides a high level of protection against sand and water ingress.

The Sphere device, also intended for observation, is a ball with the ability to transmit video from 4 embedded cameras. A distinctive feature of this device is a high level of impact resistance, which allows you to throw the ball on the level of the 2-th floor and at the same time it does not break when hit.

"Sphere" is controlled remotely and transmits the image at a distance of 100 m. The kit includes a control panel and two balls. The operation of the cameras is fully controlled from the control panel.

According to Sergey Efremenkov, the main customers of the company's products are Russian law enforcement agencies, such as the Federal Security Service and the State Drug Control Service. At the initial design stage, the aforementioned developments were created with the participation of specialists from MSTU. N.E. Bauman.

Currently, the company exports SET-1 products to countries in Europe and Southeast Asia. One of the main customers of this product is China. However, export is not a priority for the company. Previously, the ratio of products that were not sold to foreign and domestic market was, respectively, 30-40 percent and 60-70 percent. Currently, it has changed in the direction of reducing exports and increasing sales to Russian security forces. Currently, to satisfy incoming requests, the company is working to increase export volumes.

Ctrl Enter
Noticed oshЫbku Highlight text and press. Ctrl + Enter
We are
The Ministry of Internal Affairs of Russia will receive a robotic complexes "Sphere"Behind you. The development of circular vision technology for a vehicle creates new horizons
10 comments
Information
Dear reader, to leave comments on the publication, you must to register.