By the rules of war 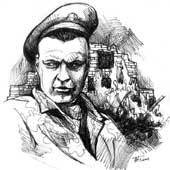 They say that the paratroopers - the most uncompromising warriors. Maybe so. But the rules that they introduced in the mountains of Chechnya during the complete absence of hostilities are clearly worthy to tell about it separately. A unit of paratroopers in which a group of scouts commanded by Captain Zvantsev was located on a large glade in the mountains, one kilometer from the Chechen village of Alchi-Aul, Vedensky district.


These were the months of rotten negotiations with the “Czechs”. Moscow did not understand very well that negotiations could not be conducted with gangsters. It simply will not work, because each party must fulfill its obligations, and the Chechens did not bother themselves with such nonsense. They needed to stop the war in order to catch their breath, pull up ammunition, recruit replenishment, etc.

One way or another, a clear revelry of “peacemaking” of certain high-profile personalities began, who, without hesitating, took money from the Chechen field commanders for their work. As a result, the army team was forbidden not only to open fire first, but even to respond to fire with fire. Banned from entering mountain villages to “not provoke the local population”. Then the militants began to openly lodge with their relatives, and the "federals" were told in their faces that they would soon leave Chechnya.

Division Zvantseva just threw "turntable" in the mountains. The camp, which had been destroyed by paratroopers of Colonel Ivanov before them, was made hastily, the positions were not strengthened, there were many places inside the fortress where it was undesirable to move openly - they were well swept. Here it was necessary to dig up the 400 meters of good trenches and put the parapets.

The first "two hundred" appeared a week later. And, almost as always, it was sniper shots from the forest. Two soldiers were killed in the head and neck, returning to the tents from the dining room. In broad daylight.

Raid into the forest and a raid of results did not yield. The paratroopers reached the village, but did not enter it. This was contrary to orders from Moscow. Returned.

Then Colonel Ivanov invited the elder of the village to "tea". They drank tea for a long time in the staff tent.

- So you say, father, do you have no militants in your village?

- How is it, father, from your village come two assistants to Basayev. Yes, and he himself was a frequent visitor. They say, woke to your girlfriend ...

- The people say lies ... - The 90-year-old old man in an astrakhan cap was unfazed. Not a single muscle on his face faltered.

“Give me more tea, son,” he said to the orderly. Black as coals, eyes dug into a map on the table, prudently turned over by the secretary.

“We have no militants in the village,” the old man said again. - Come to visit us, Colonel. - The old man smiled a little. Unnoticed so.

The colonel understood the mockery. One will not go to visit, cut off the head and thrown on the road. And with the soldiers "on the armor" is impossible, contrary to the instructions.

“Here, they have besieged from all sides. They beat us, and we cannot even conduct a raid in the village, eh?” - thought the colonel bitterly. In short, the spring of the year 96.

- We will come, surely, the respectable Aslanbek ...

Immediately after leaving the Chechen, Zvantsev went to the colonel.

- Comrade Colonel, let me educate the "Czechs" in the airborne?

- And this is how, Zvantsev?

- See, everything is within the law. We have a very convincing upbringing. None of the peacemaker will not stick.

- Well, come on, just so that then my head does not fly off at the headquarters of the army.

Eight people from the Zvantsev unit quietly left at night in the direction of the village. Not a single shot was fired until the very morning, when the dusty and tired guys returned to the tent. Tankers even surprised. Scouts walk around the camp with cheerful eyes and mysteriously grin in their beards.

Already in the middle of the next day, the elder came to the gate of the camp of the Russian military. The sentries made him wait about an hour - for upbringing - and then they took him to the colonel's head tent.

“Your people are to blame,” the elder began, forgetting Russian for excitement. - They mined the roads from the village. Three innocent people were blown up this morning ... I will complain ... to Moscow ...

The colonel summoned the chief of intelligence.

“Here the elder claims that it was we who put the stretch marks around the village ...” and stretched the wire from the stretch to Zvantsev.

Zvantsev was surprised to twist the wire in his hands.

- Comrade Colonel, not our wire. We give steel, and this is a simple copper wire. Militants set, not otherwise ...

- What action movies! Do they need it, - the old man shouted loudly in indignation, and immediately stopped himself, realizing that he had blundered stupidity.

- No, dear elder, we do not put streamers against the civilian population. We came to free you from the militants. This is all the work of bandits.

Colonel Ivanov spoke with a slight smile and participation on his face. He offered the services of military medics.

- What are you bringing me under the article? - The colonel made an indignant face.

- No, comrade colonel. This system is already debugged, has not yet failed. The wire is really Chechen.

In any case, an encryption was sent to Khankala: the gangsters were so brutalized in the mountains that, descending to Alchi-aul and allegedly having been denied provisions there, instructed stretch marks against civilians.

For a whole week, Chechen snipers did not shoot at the camp. But on the eighth day a fighter of a kitchen outfit was killed in the head.

That night, the people of Zvantsev again left the camp at night. As expected, the elder came to the authorities.

- Well, why stretching against peace put? You should understand that our teip is one of the smallest, there is no one to help us. In the morning, two more people with disabilities became, two men had their feet on your grenades. They are now fully on securing the village. If this continues, there will be no one to work ...

The old man tried to find understanding in the eyes of the colonel. Zvantsev sat with a stone face, stirring sugar in a glass of tea.

- We will proceed as follows. In connection with such actions of the bandits, the unit of Captain Zvantsev will go to the village. We will clear you. And to help him I give ten armored personnel carriers and infantry fighting vehicles. Just in case. So, father, you will go home on armor, and you will not go on foot. We will give you a lift!

Zvantsev entered the village, his people quickly cleared the remaining "failed" stretch marks. True, they did it only after intelligence work in the village. It became clear that from above, from the mountains, a path leads to the village. Cattle residents kept clearly more than they needed themselves. Found and the barn, where dried beef for future use.

A week later, an ambush left on the trail in a short battle immediately destroyed seventeen thugs. They descended into the village, not even letting forward reconnaissance. A short fight and a bunch of corpses. Five of them were buried by the villagers in their teip cemetery.

A week later, another fighter in the camp was killed by a sniper bullet. The colonel, having called Zvantsev, said to him shortly: go!

And again the old man came to the colonel.

- We still have a man killed, stretching.

- Dear friend, we, too, a man died. Your sniper took off.

- Why ours. Where our from, - the old man has become agitated.

- Your, your, we know. There are no sources around for twenty kilometers. So do your doing. Only, old man, you understand that I cannot demolish your village to the ground by artillery, although I know that you are my enemy and that you are all Wahhabis there. Well, I can not! I can not! Well, idiocy is, to fight according to the laws of the peaceful constitution! Your snipers kill my people, and when mine surround them, the militants throw rifles and take out Russian passports. From this point on, they cannot be killed. But the soldier is not a fool! Oh, not a fool, Dad! Here is how, after each killed or wounded of my people, there will be one killed or wounded of yours. Got it? Do you understand everything, old man? And you will be the last one to be blown up, and I will gladly bury you myself ... because there will be no one to bury you ...

The colonel spoke calmly and gently. From this word, said by him, were terrible. The old man did not look into the eyes of the colonel, he lowered his head and squeezed his hat in his hands.

- Your truth, Colonel, the militants will leave the village today. Left alone alien. We are tired of feeding them ...

- Leave so leave. There will be no stretch, old Aslanbek. And come back, so appear, - said Zvantsev. - I put them, Dad. And tell the militants one saying: “How many Chechen wolves do not feed, but the Russian bear is still thicker ...” Understood?

The old man silently got up, nodded to the colonel, and left the tent. The colonel and the captain sat down to drink tea.

- It turns out that it is possible in this situation, seemingly hopeless, to do something. I can not, "two hundredth" for "two hundredth" send. "Zelenka" Chechen, Wed ... n.

Ctrl Enter
Noticed oshЫbku Highlight text and press. Ctrl + Enter
We are
"St. Petersburg" companyChronicle of "friendship" 1859-1917 years
16 comments
Information
Dear reader, to leave comments on the publication, you must to register.