Who will be euromaid "sacred sacrifice"? 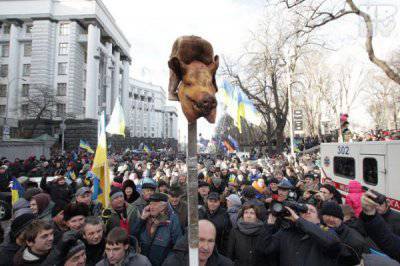 Today, at the third stage of the Orange Revolution, after “seizing the street”, this is its next goal, according to the works of American professor Gene Sharp. In the media, vague information slipped through that allegedly some Georgians were preparing some kind of “corpses” in Kiev. Does this have anything to do with the appearance of Mr. Saakashvili in Kiev? It is difficult to say, but, I remember, in Georgia under Saakashvili, during the 08.08.08 war, the media also had information about a provocation in Tbilisi with “corpses”.


In general, the “sacred sacrifice” is the cornerstone of any orange revolution: it is it that makes it a “holy thing”, throws white vestments on the leaders of the revolution, and blurs the “regime” with the innocent blood of the martyrs. For the sake of such a sacred goal, revolutionaries are ready to go to any lie, and, sometimes, a crime against their own companions.

After all, the sacredness of the sacrifice suggests that it must be from the side of the Orange Revolution. This is the worst thing about her sting, which Professor Gene Sharp could come up with. No, they, of course, are not complete thugs, and are always ready to use the casual sacrifices of revolutionary perturbations as "sacral", the probability of which in a situation of chaos on the streets is very high. And present them to the "regime." But if there are no suitable victims and they cannot be used to discredit the “regime” with innocent blood, then simply “there is no other choice”, as is often said in Western films.

History also knows the staged “sacred sacrifices” that allegedly died at the hands of the “bloody regime”, for example, the “sacred sacrifice” of the Czech Velvet Revolution came to life after its end, but not everyone is so lucky.

Dostoevsky's genius long ago pointed out this revolutionary baseness in the novel “Demons”, when a person who decided to commit suicide was revolutionaries offered to do it at the right time and place, so that he could help with his death in the cause of revolution. Lying to revolutionaries has always been just "military cunning," weapons in the fight against the "regime", so taking their word for it is just nonsense. (By the way, it was for this bad habit that the victorious revolution subsequently "devours its children.") And now, from the heights of Sharpov's theory, let us turn to euro-maid reality.

The one who more than others speaks about peace, he prepares for war, the popular wisdom says: “the cap always burns on the thief”. And who in Kiev says a lot about the security of peaceful demonstrations? Draft, on which the famous stigma has nowhere to put. What a coincidence!

It is well known that democracy and revolution are not “lobio eating”. And peaceful revolutionaries armed with hammers are not at all visitors to restaurants. The Euromaidan revolution today needs a “sacred sacrifice” to continue it, because the “regime” is not yet bloody enough (there is not a single sacrifice of it!), And such revolutionaries will, one way or another, provide it, unless have time to grab the hand provocateurs.

Unfortunately, there are already volunteers in the "victim". Outrageous singer Ruslana announced her self-immolation for the sake of Euromaidan ideals. This gives reason to fear for her fate, because such an act can be used for the benefit of Euro-revolution. And this may not be a staged act!

“Look to whom it is profitable,” said the ancient Romans, and this wisdom has not yet become obsolete in our world under a lonely moon. Therefore, when the “sacred sacrifice” will be brought by euromaid revolutionaries, we will remember it, and repeat it to the media, which will suddenly forget it.

Now Euromaidan is ostensibly against the “Yanukovych regime”, “which has already got everyone,” but this is just a unifying political approach for imparting mass protest. The main goal of Euro-revolution derives from its name - it is Euro-association, even if it is based on slave conditions. Yanukovych ripped off the Euro-Association in Vilnius, and therefore became the target of Euro-revolutionaries.

This is a common trick of Western political consultants, they often use it to hide their main goals behind other, more emotional ones. So it is more effective to reach them. (For example, they declared Bashar al-Assad as a non-handshake solely because of his crimes against humanity.) One should not be led by revolutionaries, one must remember what their word is worth. All the fuss broke out at all because of the “Yanukovych regime”.

The mob of hysteria is always the engine of the orange revolutions, because it is staged, ordered, and only uses the real problems of society to achieve the political goals of its customers. And it is useless to persuade and persuade a tantrum - any doctor will tell you. To stop the tantrums in outdoor conditions, doctors recommend that you give the usual slap in the face, as the most effective means of bringing the patient to life.

In the case of euromaid hysteria, anti-Maidans may act as such an antidote, which are already being assembled and, in fact, are “Russian Maidan” and a public equivalent of a medical slap.

Ctrl Enter
Noticed oshЫbku Highlight text and press. Ctrl + Enter
We are
Euromaid revolution loses paceArmament from the exhibition "Made in Georgia"
205 comments
Information
Dear reader, to leave comments on the publication, you must to register.