December 7 2013
470
Today's Euromaidan is a new Orange Revolution in Ukraine, asking to love and favor, so to speak. Without any equivalents pointed out by some political scientists, to remove unpleasant analogies. I recently published (in “VO”) an article entitled “The Orange Revolution. Instructions for annihilation ”, and it's time to apply this very instruction on the annihilation of the work of American professor Gene Sharp. 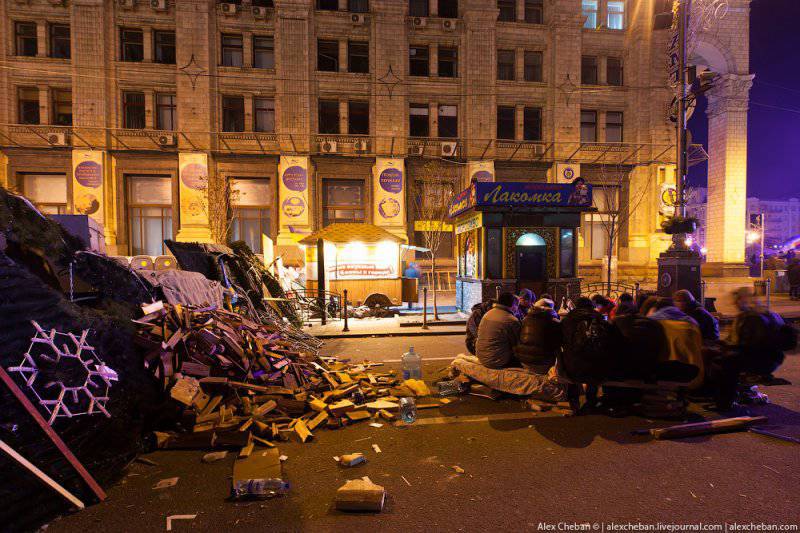 Each orange "trick" is ordered by the Americans not for fun, but for a change in the "regime" that has become objectionable. It is being prepared, and Ukrainian deputy Oleg Tsarev found this evidence at the American embassy in Kiev: the embassy recently released three hundred instructors for the development of a “civil society” in Ukraine. As ordinary reasons, elections are usually used, so she was preparing, probably, for the 2015 year. But Ukraine fell off the hook in Vilnius, and insulted Europe, and the United States behind its back, refusing to be Euro-colonies, which served as a natural excuse. According to President V.Putin, this was a false start. Maybe.

The Orange Revolution begins with its “hook”, on which provokers catch power. The technology is uncomplicated: “peaceful” provocations continue until they succeed, that is, the police / police will not do any nonsense that could cause a feeling of fair public outrage, with appropriate information flow. In extreme cases, staged stupidity is used: “high end” justifies low lies.

The “hard hook” for the power of the Euromaidan revolution was the night hard crackdown of the demonstrators “Berkut”. Before this, the “Berkut” was provoked for a long time, it is possible that some of the policemen lost their nerve, maybe a “special order” was being carried out, a number of experts think so, and the orange scenario provides for such things. We must realize that the provocations would continue until the goal set for them was achieved, but that night it was not achieved completely: there were no casualties, and this does not prove, as provocateurs would like, the true nature of the “Yanukovych’s gangster” as they now call it.

Perhaps the policemen of the “Berkut” just saw enough of the Western police chronicles, since they “worked” on the Maidan in a very western way, like the policemen of New York, London and especially Tallinn and Tbilisi. Demonstrators are also dispersed there, and there are enough broken heads, and even there are victims - for real democracies it is not at all uncommon. So do not Western colonialists point out to us excessive cruelty. But for Ukraine it was, of course, a shock.

The second step of orange chaos is the so-called “arson”, the creation of a permanent rally, which after the “hook” is relatively simple to organize, and it is created on Euromaidan.

The third step is the seizure of the streets of the capital and the radicalization of demands, from the signing of the Euro-Association to the resignation of the government. Everything goes on increasing, strictly according to the instructions of Professor Sharpe. But here our revolutionaries are again flawed. Only the square and several streets and buildings adjacent to it were captured, the attack on the presidential stronghold was repulsed, and again without casualties, some of the provocateurs were arrested, the authorities were able to act and begin investigating the street riots. And at the same time, he apologizes for the actions of the "Golden Eagle", - this is a surprise, not provided for by the training manual J. Sharp.

At this step, the Euromaid revolution has so far slowed down. The orange scenario requires a constant increase in tension, and the Euromaidan boils, but does not spill out. The Orange Revolution is clearly losing pace. What's happening?

It was the West itself that took a pause: it has not yet lost hope of crushing President Yanukovich, and dragging him to Brussels to sign an agreement on the Euro-colonization of Ukraine. At a meeting of the OSCE, which, by a strange coincidence, was held in Kiev, Victoria Nuland, the US Assistant Secretary of State expressed, as they say, unequivocally: “The United States is on the side of the people of Ukraine, who sees its future in Europe,” and Yanukovych posed a dilemma: “to meet the expectations of his people or disappoint and risk immersion in chaos and violence. " If it’s not Euromaidan’s customer’s ears, then what?

A.Pushkov, chairman of the State Duma committee, said in this connection that “the battle for Ukraine is gaining momentum”: “The United States intends to blackmail President Viktor Yanukovych with the threat of“ chaos and violence ”to force an association with the European Union.”

Yanukovych succumb to blackmail, or not? If he signs an association, he will sign a political capitulation, ease his future overthrow, as he will greatly help the continuation of the Euromaidan revolution. Yanukovych has too bad background: Vilnius all-European failure, and now also Euromaidan overclocking. But he will not make his fate easier - the West no longer trusts him, and Western guarantees in such cases are not worth a penny.

Western politicians involved in Euro-colonization, no longer hide: "For the European future, Ukraine needs a new government." It is clear why: its most important stage, connected with the cessation of large-scale industry, will require the suppression of the actions of the population against a sharp deterioration in their living standards. Here you need an iron hand from Galicia, and not at all from the Donbass.

If Yanukovych rejects Euro-Association - the menopause of the revolution ends, the escalation of "chaos and violence" will be followed ... The fourth orange step by J. Sharp is the "sacred victim" of the revolution, which is designed to give it "holiness", and stain it with blood. Accusations of spilling “innocent blood” become, as it were, the engine of escalation of protest, up to the demolition of the “criminal regime”. By sacrificing this sacred sacrifice with euromaidans in the name of “European values” we should prepare now. The first information.

Because it is impossible to avoid it, even if the revolutionaries fail to provoke the regime into a “victim”. After all, the sacrifice is made by them, and therefore can also be rigged, or staged. (The Czech regime-killed student, whose coffin was worn during the Velvet Revolution, then came to life!) After the “sacrifice” that had taken place, the entire Western press would hasten to condemn Yanukovych as a “bloody dictator” or “butcher,” like Milosevic, local customs are also welcome. The demands of "resignation" will be replaced by calls for the "overthrow" of the "bloody dictator" and the holding of immediate "fair elections".

The last, fifth orange step in the workbook of J. Sharp consists in overthrowing the “criminal regime” (here are possible options, see the Velvet revolutions in the countries of the former socialist camp and Yugoslavia), and falsifying “fair elections” for the approval of the colonial pro-American democracy-demagogy.

While Yanukovych manages to keep a pause, and we must keep it as long as possible. The rotten text of the “Euro-association” of Ukraine will certainly come out, and the sobering action will take place, the revolutionary hysteria will run out of steam. A chance for Yanukovych and his team - to hold on, try to pull out the situation. Try to wrest the sting of provocations from the Euromaidan revolution. And this is a real chance, because Russia, if necessary, will insure, and Yanukovych knows it.

Ctrl Enter
Noticed oshЫbku Highlight text and press. Ctrl + Enter
We are
Euromest EuromaidanZlatoust at the American Embassy. Masterpieces of Russian espionage
470 comments
Information
Dear reader, to leave comments on the publication, you must to register.