Political analyst Lev Krishtapovich: "There is an information and psychological war against the all-Russian civilization" 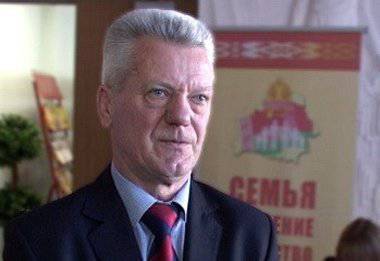 A very fashionable topic in the West today is the need to modernize the economies of the post-Soviet countries. First of all, the “good” Western politicians, of course, are extremely worried about the Russian economy, and with it the economy of its closest ally, Belarus. Why would such a concern? Maybe the pragmatic West really cares about our well-being? However, our European “well-wishers” are ready to provide their high technologies without restrictions (supposedly) with one “small” condition: Russia, and with it, Belarus should modernize through the recognition of European “democratic” values, including those adopted today in Europe moral standards.


That is, in the end, we are talking about a change in the mentality of our peoples. At the same time, European “teachers” have enough cynicism to openly put forward such arguments: it turns out that our peoples are non-initiative, not enterprising, uncultured and inert, and they also stubbornly adhere to their paternalistic psychology attitude towards seniors - LK). Therefore, according to their logic, in order to modernize the economy, it is necessary to change the mental characteristics of the population, to make it truly European, that is, “cultural, relaxed and enlightened”. And after all, what a shame: there are individuals among us who agree to shake their heads - yes, that’s how we are gray-eyed and miserable, the Europeans would rather have taught us life! However, nothing is new in Holy Russia. Even in the nineteenth century, the great Russian poet Nekrasov said about such: “People of servile rank are mere dogs sometimes.” But it is, in fact, not about them. Because in the whole topic of our modernization that is exaggerated by the West, through the adoption of European values, there is a double lie, one part of which lies on the surface and is rather primitive, while the other part is deep and very dangerous.

Part one. It is clear that the basis of modernization and empowerment of man, including his initiative and enterprise, should be based on self-esteem. A person who is constantly being told that he is lazy, that he has a dependent psychology, that he needs to change his mentality, will always feel his social and moral inferiority. And to think that such a person will be capable of innovative thinking, towards modernizing the economy is a clear mistake. The conclusion suggests itself: Yes, these "benefactors" are not going to really help us in the modernization of our economies. And all their promises and proposals are nothing more than a “carrot” on a stick with a rope in front of a donkey’s nose (they, of course, would like to keep us with you). All they want from this “modernization” is to kill economically, strangle our best enterprises by dumping and seize our markets (this is the peaceful option). However, as they would say in Odessa, “everything is so clearly seen, I would not even say anything”. It is clear that they will not be allowed to do this. But then why, why all this fuss?

Part two. And this fuss is just a bright screen to cover their main, deep and promising task: to destroy our morality and morality, defame and ridicule the Orthodox faith, and thus destroy all our spiritual foundations on which every nation has literally everything. I think the time has come to call a spade a spade: today the West conducts a carefully disguised, well thought out and prepared information-psychological war against the all-Russian worldview of our peoples, which has as its ultimate goal nothing more than the complete destruction of our all-Russian civilization.

Why, then, is it our morality and ethics, our spiritual foundations, that are primarily at the sight of this invisible war? Yes, because for this there are more than good reasons.

To begin with, from the geopolitical point of view, Russian civilization is the core and main pillar of the Eurasian continental block, whose interests are opposed to the aggressive attitudes of Western civilization, or the so-called Atlantic Large Space. And this pivot, while it exists, will not allow Western civilization (the countries of the “golden billion”) to establish its real, and not the desired, world neo-colonial domination. Because, from the point of view of the military, even with the significant superiority of the nuclear potential of one superpower over the similar potential of another, any full-scale conflict between them is for everyone, figuratively speaking, a one-way ticket. This alignment, of course, the West does not suit. But to abandon their plans, these gentlemen are not used to. Therefore, since the plan “A” (Harry Truman’s variant. - LK) is impossible today, they quietly went over to the plan “B”, namely: to destroy the all-Russian civilization, which prevents their world domination, not by military means, but by other means . Very tricky and thoughtful. Which, as always, is masked by the best of intentions.

Indeed, what would seem to be clearer and simpler: enlightened and democratic Europeans and Americans lend a helping hand to developing countries (they call us that “politely”, to themselves, bearing in mind that our countries, from their point of view, are underdeveloped). And what would seem to be bad is, if, together with high technology (usually twenty to thirty years ago), good Europeans and Americans will give us their “values” (read your social and political trash: hypocritical “democracy”, same-sex marriages, as well as their own wolf laws, because, as the American millionaire Benjamin Sorez frankly said, “are there no people in the world of free enterprise, are there only buyers and sellers”)?

But the fact is that the union of economic modernization and modernization of our mentality offered to us by the West, first, contradicts the elementary laws of logic. Because the problem of modernizing the economy cannot be extrapolated to the sphere of morality. Moral and moral values ​​are not subject to progress, they are absolute. Morality deals not with the momentary, relative, but with the eternal, perfect. A person may be more or less intelligent, but he cannot be more or less honest - he is either honest or dishonest. A person's mentality is his intrinsic value, and if you try to change it, that is, “modernize” the system of spiritual values ​​of Russians and Belarusians, it will deprive them of their stability, meaning of life, and turn any of their activities into hopeless infinity. Because the essence of Russian civilization lies in the labor principle of human life, and this is its fundamental difference from Western civilization.

By the way, if we talk about the same modernization of our economy with the help of the West, then there are good reasons to think: do we really need it like that? Because from the point of view of economic, all-Russian civilization is a distinctive economic organism, fundamentally different in its livelihoods from the Western model of free enterprise. The most high-tech equipment, if desired, and the availability of funds, any of our company can simply buy in the same West for money. And many of our domestic technology, by the way, today already overtake foreign. The countdown of the time when we at least technologically catch up with Europe in most of the key industries, is going on not even for decades - for years. And this can not but cause hostility for those who are accustomed to look down upon other peoples.

Today, we, Russians and Belarusians, are increasingly focusing on the replacement of foreign products with domestic goods. And this is what we get: our people more and more trust their domestic producer, more and more prefer to buy their own, reliable and reliable. Our logic here is clear: without developing our production, we cannot talk about the economic security of our countries. So is it not time, by analogy, to implement import substitution of foreign ideas and values ​​imposed on us by our own national spiritual foundations? For without this, all our conversations about the national idea, about respecting our past, about raising patriotism, will remain talk. As Confucius wisely remarked, "the exclusive occupation of alien teachings can only be harmful." In our case, letting ourselves impose other people's moral and ethical values ​​is no longer just harm, it is a real spiritual catastrophe. Because as a result, we will lose our main life rod, and in the end we will lose ourselves.

No, it is not by chance that Western politicians, under any pretext, under any cover, stubbornly seek to destroy our spiritual foundations. Because for us, the Russian people, even divided into several states, our common morality and ethics, our united Orthodox faith, our spiritual commandments, which our great ancestors have bequeathed to us - this is our main fortress, the strongest defense against all adversity and trials .

How many times throughout our total stories the cruel conquerors tried to enslave the Russian people — but even when our fortresses were destroyed, when fire and ruin reigned everywhere, when it seemed that nothing could help the Russians survive as a people, there was only one fortress impregnable for any enemy — this the strength of our Russian spirit, our loyalty to our faith, our spiritual foundations. And the Russian people once again rose and became shoulder to shoulder, and from their courage any evil spirits retreated from our land, and our united Holy Russia rose again from the ashes, majestic and invincible.

We all need to be firmly aware: as long as we are strong in our faith, until we betrayed those moral and moral values ​​that have helped our ancestors to overcome the most terrible ordeals for centuries - no one in the world can defeat us, no one can dictate us how to live and what to do. And vice versa, if we, God forbid, let us destroy our spiritual foundations, then our states will inevitably, a little earlier or a little later, crumble, and we will all just cease to exist as a distinctive and self-sufficient civilization.

Therefore, today, strengthening our defensive military alliance, developing international structures for deterring a potential aggressor, we must simultaneously resist any attempts to destroy our main fortress — our faith, our morality, our all-Russian spirituality.

Author:
LEV KRISHTAPOVICH Doctor of Philosophy, Deputy Director of the Information Analytical Center at the Presidential Administration of the Republic of Belarus
Originator:
http://file-rf.ru/analitics/1031

Ctrl Enter
Noticed oshЫbku Highlight text and press. Ctrl + Enter
We are
Belarusian philosopher: We are united by our common historyMalorussky project: on the solution of the Ukrainian-Russian national issue
24 comments
Information
Dear reader, to leave comments on the publication, you must to register.