Accidents at Japanese nuclear power plants. Should we wait for a second Chernobyl? 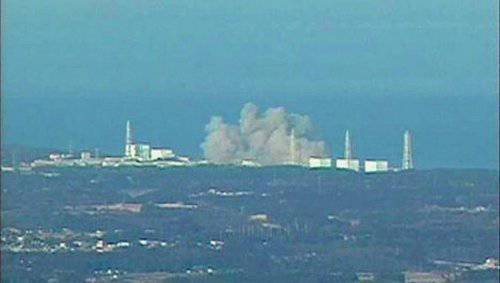 As a result of a powerful earthquake of magnitude 8,9 points and the subsequent tsunami, Japan was threatened with a real nuclear disaster. The natural disaster led to accidents at once at four nuclear power plants, and at one of them, “Fukushima-1”, two explosions occurred in two days. Despite the fact that the authorities of the country of the Rising Sun declare that, in general, accidents at nuclear power plants are local and do not pose a serious threat, in fact everything looks somewhat different, and it is still early to rule out a catastrophe equal in scale to Chernobyl.

The epicenter of the 11 March earthquake was just 130 km off the northeast coast of Honshu Island, where there are four operating NPPs at once: Fukushima-1, Fukushima-2, Tokai and Onagawa. At these stations are 14 of 55 nuclear reactors, which Japan has. Such a large number of reactors is not accidental - in recent decades, Japan has been actively developing nuclear energy, thus trying to get rid of the need to import energy from other countries.

In view of the fact that in Japan strong earthquakes occur with constant frequency, during the construction of all nuclear power plants, special attention was paid to their seismic safety. There is nothing to blame the Japanese for, despite the fact that the earthquake that occurred was one of the strongest for the modern world. history, the buildings of power stations withstood all the aftershocks without serious damage. The reactors themselves, as well as the enclosures protecting them, were not damaged either.

The electronics also worked as it should, and at the first pushes all reactors were shut off automatically. Diesel generators that produce the electric power needed to cool shut down nuclear reactors turned on in time. However, they did not work for long, and within an hour after the earthquake they were put out of action by a giant tsunami, for which even the special protective dams provided for in the Fukushima-1 design did not become. Thus, the generators were out of service, and the threat of overheating of the reactors and, as a consequence, the possibility of a serious nuclear accident was created.

It should be noted that at the time of the Fukushima-1 accident, only three of the six reactors operated, the rest were stopped for a routine inspection. This made the task somewhat easier for the plant staff, who had to manually cool only three of the six reactors. In the first few hours after the accident, there were no problems with overheating, but soon the pump used to cool the 1 reactor failed. 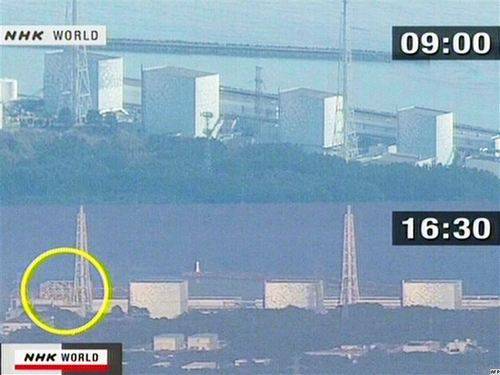 This led to the fact that as a result of the gradual heating and subsequent sharp pressure jump, a large amount of steam accumulated inside the reactor vessel. When it reached a critical point, the station staff decided to release this steam into the power unit housing. During this process, the steam reacted with a zirconium alloy from the shells of nuclear fuel, and this in turn led to the release of a significant amount of hydrogen, which, mixing with air, led to an explosion inside the first Fukushima-1 power unit.

As a result of the explosion, part of the roof was collapsed, as well as the load-bearing wall of the power unit, but the reactor itself did not affect the explosion. Despite this, radiation has already begun to enter the atmosphere, and, according to Japanese media, in the first hours after the explosion at the station, it exceeded the maximum permissible dose for a person by 1000. More than 180 thousand people were evacuated from nearby cities to the station, and according to various data, the evacuation zone ranged from 20 to 40 km within a radius of Fukushima-1.

To normalize the situation at the station and the cooling of the reactor, additional forces were tightened. Dozens of fire brigades began pumping water into the reactor directly from the sea, and the threat of overheating gradually disappeared. The Japanese authorities were quick to say that they were able to stop the radiation leak, but 12, 13 and 14 numbers appeared, reports of accidents at three neighboring Fukushima-1 NPPs. 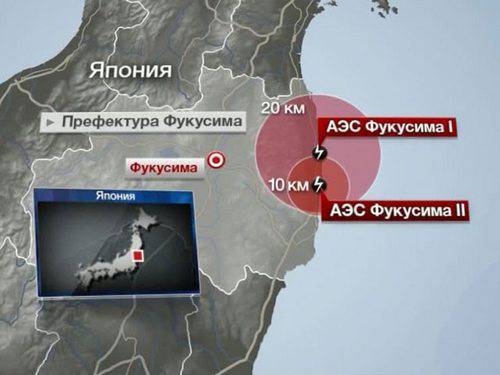 True, despite a slight increase in the radiation background with accidents at the Onagawa, Tokai and Fukushima-2 nuclear power plants, they soon managed to cope. However, in the morning of March 14, an explosion occurred at the third Fukushima-1 power unit. The situation there developed in the same way as in the explosion at the first power unit of this station.

At the moment, 22 cases of exposure of employees and emergency workers are reliably known, but in general, Japanese authorities still prefer to limit themselves to scant reports and declare that the situation with accidents at nuclear power plants is a local state of emergency and has nothing to do with 1986 disaster in Chernobyl.

World experts assess the situation around Japanese nuclear power plants in different ways. Someone thinks that there is no cause for concern, and the radiation background in Japan has increased insignificantly, while others argue that the threat of a global catastrophe still exists. In their opinion, if the third explosion follows the two explosions, and as a result it will damage the reactor vessel, the emission of radiation may well be comparable to the scale of the Chernobyl disaster.

Russian officials and specialists in the field of atomic energy all as one assert that even with the worst consequences, the east of the Russian Federation is not in danger. However, despite this, in the Russian press now and then there is information that a radiation cloud is directed towards the Kuriles and Kamchatka. However, apparently, at the moment it is nothing more than rumors.

The accident at the Fukushima-1 NPP received an 4 score (local accident) using the INES 7 scale, which is used to estimate the scale of accidents at nuclear facilities. By the way, the accident at the Chernobyl nuclear power plant received the maximum possible 7 points. Does this mean that what is happening in Japan is not as serious as the world media reports about this? It is likely that the Japanese authorities will deliberately underestimate the level of the accident, because if the situation is really very serious there, this will mean the end of the Japanese programs for the development of nuclear energy. At least for the next 10-20 years. 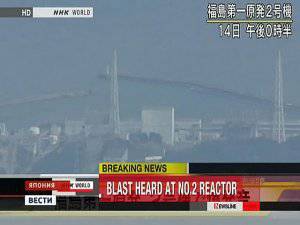 783 fuel rods of spent nuclear fuel can be damaged due to a fire on Tuesday in the fourth reactor building of the Fukushima-1 nuclear power plant, the station's operator, Japan’s largest power company, Tokyo Electric Power, said.

“This possibility cannot be completely denied,” the company noted. According to her, "a fire in the zone of the fourth reactor of the Fukushima-1 nuclear power plant" occurred on the 4 floor of the reactor building at 09: 40 local time (03: 40 Moscow time), the ceiling of the fifth floor was also damaged there in the morning.

Shortly after the start of the fire in the fourth unit, an explosion of hydrogen occurred. By now, the fire on the power unit has been extinguished, ITAR-TASS reports.

Meanwhile, the French Embassy in Japan reports that during 10 hours, an increased but weak radiation zone will approach Tokyo.

The embassy urged compatriots not to panic and, if possible, not to leave their homes. The embassy also advises to close the doors and windows in the houses tightly.

Due to the hydrogen explosion at the second reactor of the Fukushima-1 nuclear power plant, which occurred in 06: 10 am local time (00: 10 Moscow time), the radiation level, according to the station, in its area after the explosion reached 8217 microsieverts at one o'clock.

This is eight times the marginal rate per year. There is a danger that the pool is damaged to reduce the pressure in the lower part of the reactor, and there may have been a leak of radiation.

Now, all personnel have been evacuated from the second power unit of the Japanese nuclear power plant Fukushima-1, except those who are directly involved in monitoring and managing its systems. Seawater injection for cooling continues to the reactor.

Previously, hydrogen explosions occurred at its first and third power units. However, they did not damage the reactors themselves.