December 6 2013
4
Several years ago, a number of well-known manufacturers of optical sights decided to master a new direction - combining the sight with a laser rangefinder. The main idea of ​​such a single module is to facilitate the shooter’s equipment (not so much in terms of weight as in ergonomic terms) and the ability to almost instantly measure the distance to the target. After measuring the distance, the shooter uses the information obtained to make the necessary corrections.


By itself, accurate measurement of the distance to the target is a serious help to the shooter, whoever fired at a distance of 300 and further agrees that to accurately determine the distance at such distances you need serious experience and a developed eye, although this is usually not enough. But, having measured the distance, the rifle operator still spends the time for the introduction of the amendment, since The range of corrections available in the scope is limited. What does this look like? Measured the distance, got a number and start turning the amendments drum in the right direction. Well, if the drums of the sight are open, and if they are covered with lids (which often happens), then consider that the target is gone. Therefore, one company, the Americans from Burris went further. They added another module to the system - a ballistic calculator. So it turned out a series of Eliminator sights. Since the first sight was quite simple, it is better to start immediately from the second. 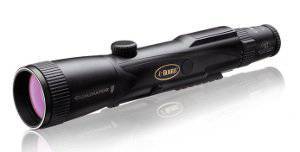 Burris Eliminator II - This is a sight with magnification from 4 to 12 times and a lens in 42 mm. The sight has an integrated rangefinder module with a max. distance measurement in 910 m and built-in ballistic calculator. Included with the scope is a list with ballistic data on more than 1500 factory ammunition, including smooth-bore (the meaning is not very clear, but thanks for the care). Find your ammunition, enter it in the sight menu and shoot. If the ammunition is not listed, then we find the data on the box with cartridges or from the manufacturer and enter them. As a result, we get the following: We aim the sight at the target, press the power button on the range finder on the sight or the remote control and voila - the point on which to aim is on the target grid lights up. 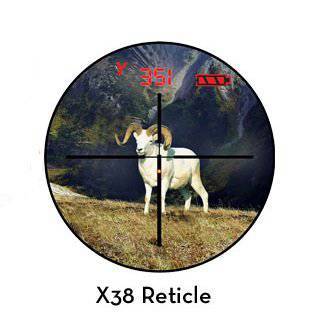 reticle
There is one more thing that the shooter spends time on - introducing amendments to the wind. To obtain data on the wind, experience and developed senses are also used. Well, if you need not by eye, it is used pocket weather station. Burris decided to take on the solution of this problem too. 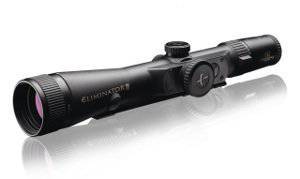 So appeared Burris Eliminator III - the development of the previous version of the sight, in the best traditions of the theory of evolution, everything in the sight became bigger and better, though the device also grew in size. The first step was to increase the zoom of the sight, so with the same minimum magnification in 4x, the maximum magnification increased to 16x. The diameter of the lens also increased to full-height 50 mm, which had a positive effect on the luminosity and visual field with an increase to 12 times. The maximum range of the rangefinder increased to 1090 meters. Has undergone changes to the body, found a more convenient place for the power button, and so, on the little things. Most importantly, the force of wind and its direction can now be brought into the scope (only perpendicular to the trajectory of the flight of a bullet naturally). With the Eliminator III arrow in the literal sense of the word, it became enough to press one button and the sight shows him where to shoot. Vertically the point lights up, and for the correction horizontally the standard points in Mil'ah go, the display shows the necessary number of points to retreat to. 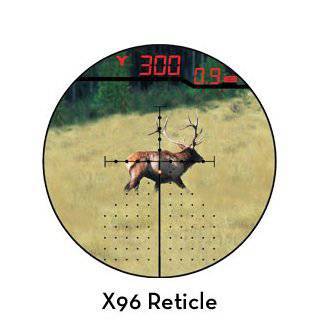 In fact, the Eliminator II and Eliminator III sighting systems are unique devices, as yet no one has embodied such functionality in metal, competitors, even more expensive ones, look more faded. And of course, many professional shooters will not throw away their favorite analog sights, but for the collection and the rest, while shooting, the pros take them all the time. The main audience - those who want to reduce their efforts and improve accuracy, do not waste time preparing the shot, and just buy one sight instead of a set of equipment.

PS: We hope in the fourth generation it will also measure the strength of the wind itself 
Ctrl Enter
Noticed oshЫbku Highlight text and press. Ctrl + Enter
We are
The backlog of Russian rifle scopesSVT. Career rifle
4 comments
Information
Dear reader, to leave comments on the publication, you must to register.