Whoever comes to us with a sword, will die from the rake, or the Double-Edged Stick 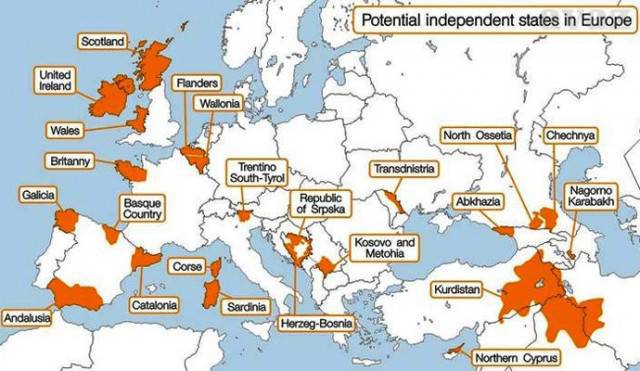 At one time, Catherine II, a lover of progressive French enlightenment, having learned about the revolution in France, instead of rejoicing at the problems of her neighbors, inflating the embers of the popular masses and growing at their expense with territories, created a sacred union. The union is against all possible revolutions and national liberation movements. The first thing she thought about was the rake effect, although, if the English were in her place, they would not miss the opportunity to dance on the bones of enemies and allies for their own benefit, which, incidentally, they always did.
The European partners thanked Russia in their own way, stabbing her in the back during the Crimean War — the very Russia that had liberated them from Napoleon a couple of decades before and had crushed all the uprisings against their governments.

Now our European friends are actively trying to inflame inter-ethnic conflicts, participate in the dismemberment of other states, play with revolutions, displace legitimate power, help extremists and terrorists around the world. However, in my opinion, all these Euromaidans, Libya, Syria, Kosovo, etc., will come out sideways and, sooner or later, hit them on the forehead with a power of a shaped charge.

As they say, whoever comes to us with a sword, he will perish by the sword. Centuries go by, technologies are improving, but nothing changes ...

For the time being, let us put aside the most serious threat - millions of Arabs, Turks and Africans flooding Europe and not wanting to embrace European culture. In Germany, France, Italy, Greece, the situation has almost reached the boiling point, and this is only the beginning ... Let's consider Europe itself, with all its hidden ulcers and contradictions. Now most states get along peacefully with each other thanks to the high standard of living of the overwhelming majority of the population, but will the current situation last for a long time?

Europe has been living for a long time due to the fact that it sold “glass beads” to the whole world. Now - the same thing, only in the role of "glass beads" appears various high-tech products that the natives of developing countries are not able to produce on their own.

However, the situation is changing, the same China is beginning to pull the blanket over itself and many other countries, too, and the process will only develop. When the aborigines learn to create "glass beads" themselves, they will no longer need European ones, and Europe is not able to offer something else, for example, resources. And then, when the standard of living drops sharply, the tolerant mask of Europe will drop from their faces. For Europe, the era of rake will come. I hope, comrades from China and Russia, who also have a rich experience of revolution, will help them - for the sake of the triumph of democracy, justice and other things ...

For now, let us consider only some separatist sentiments of the exclusively ancestral peoples of Europe: the future field of activity for New Maidans and Kosovo.

Lithuania. Damned Russian invaders forcibly joined the Polish city of Vilna (Vilnius - the capital of Lithuania) and its environs together with the Polish population. In Vilna, the proud nobles are second-rate people; they are not allowed to any key posts. Poles do not like it and Poland, too ...

Spain. Basques - the once independent Kingdom of Navarre, inhabited by Basques, which existed at the junction of France and Spain at the beginning of the 20 century, attempted to create its own state. Fascist dictator Franco mercilessly stopped these attempts. However, the Basques have not calmed down so far, a significant part of the population is actively demanding independence. Do not hesitate to use Basques and terrorist methods.

Catalonia. Another major region of Spain, trying to achieve independence and crushed by Franco. About 90% in the referendum were in favor of independence. On the 2014 year, actions are planned for the final separation of Catalonia from Spain.

Similar movements also exist in other regions of Spain, but they are not so aggressive: Aragon, Andalusia, Castile, Leon, Asturias, Canary Islands ...

Northern Ireland. The Irish have long hated the British. The power of the British was always kept there on a tough military force. Irishmen periodically arrange pogroms, trying to achieve separation of northern Ireland from Great Britain, do not disdain and terrorist methods.

Scotland. In this proud country, so far only about 40% of the population favors secession from the UK - according to the UK itself. So far the Scots are behaving quite peacefully, especially after it was promised to hold a referendum for the separation of Scotland from Britain. But ember is easy to inflate; there are relevant technologies. Moreover, according to the Scottish referendum, the 2 / 3 population of Scotland favored separation from Britain.

There are also movements for the independence of Wales, Shetland Islands, Gibraltar (enclave in Spain), etc.

Denmark. The Faroe Islands have made repeated efforts to separate from Denmark.

Italy. Paddan Republic: in 90-ies, in the economically developed provinces of the north, a movement was formed for the separation of the rich industrial north and the creation of the Paddan Republic from Italy. The attempt to secession in 1996 failed, but the so-called League of the North continues to develop and have a significant influence on the policy of this region (it already has 30 seats in the Chamber of Deputies). The popularity of the party grows during periods of worsening economic problems and decreases during periods of stability.

There are also movements for the separation of Sicily, Lombardy, Sardinia and other territories.

France. Alsatians, Bretons, Corsicans, Basques. Then Normandy and Nice are all regions in which national liberation movements exist. Here are some examples.

In Corsica, created the front for national liberation. Active terrorist activities began in the 1976 year. Money is obtained mainly through smuggling and marketing of drugs. The government is making concessions, granted autonomy, but this is not enough for the Corsicans.

Brittany There operates the "Revolutionary Army of Brittany." From the statement of the leader of this party: “Until our land, our people, our language, armed struggle is recognized as the only effective means for us to create these conditions.”

The Basques living on the border with Spain also actively want to create a single independent state.

Belgium. Flanders. The Flemish movement for independence and the formation of an independent state of Flanders escalated in the 21 century. The Flemingies are gaining more and more popularity, speaking for the full independence of Flanders. After the fall of the Third Reich, which promised the Flemish independence, the population is subjected to certain language discrimination and gallation. The local people totally dislike it.

Strangely enough, many of the Flemish opponents - the Walloons, who speak not French, but French, also want to create their own state - Wallonia, or to join France, however, the activity and intolerance of the Flemish is far away.

Poland. Upper Silesia. Before the war, there 60% of the population supported the accession to Germany. "Cursed Stalin" gave this territory to Poland. And the Poles themselves evicted all the indigenous German population in a violent way, like the American Indians used to do, by the way, the flag of Upper Silesia is exactly the same as that of fraternal Ukraine.
During the forced relocation, about 1,7 million people died. Strange why they do not remember this? However, they also show the same forgetfulness about the joint attack with Hitler on the Czech Republic and hundreds of thousands of Red Army men tortured in captivity. However, the language of those Poles who remained is different from Polish, as well as Russian from Ukrainian. Fate, by the way, is also similar in them, since this territory has constantly passed from hand to hand to the most different states.
Now, oddly enough, the Silesians began to recall their independence, the main part of the population, however, so far only wants autonomy.

Ukraine. No words, well, tell me why Ukrainians can love Russia, which forcibly attached to it the whole of Western Ukraine, and before that, the Crimea and the southern Black Sea coast, where there were no Slavs at all since the times of Tmutarakan principality, and especially Ukrainians?

Everything is clear in principle here - the Polish-Austro-Hungarian west is trying to make the pro-Russian east happy, since there is no time to go on the Maidan, since people mostly work, and besides, they don’t pay for it ...

This list could go on even further, but it’s too long and tiring, so I’ll just list some other states.

What to say? Rich field of activity ...

Ctrl Enter
Noticed oshЫbku Highlight text and press. Ctrl + Enter
We are
The world we leave, the world we enter, and the world between themWhat you didn't want to know about England
87 comments
Information
Dear reader, to leave comments on the publication, you must to register.