December 7 2013
16
HISTORY CHECHEN WARS COULD BE OTHER 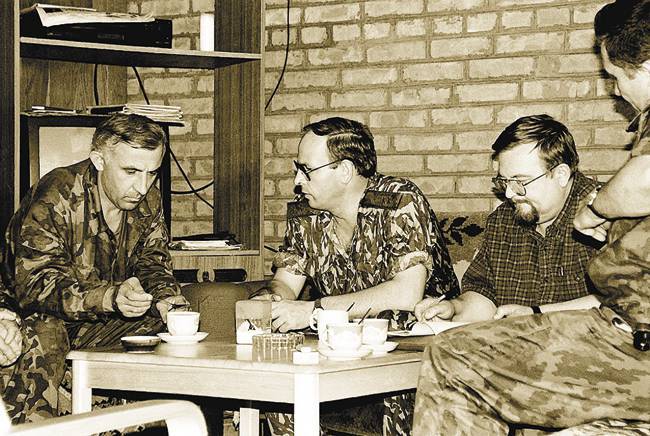 The chief of staff of the Dudayev formations Aslan Maskhadov, Anatoly Romanov and Vladimir Zorin. June 1995 of the year.

Some time ago, in the Moscow cinema "Victory" the premiere of the documentary film "General Romanov - Devoted Peacemaker" took place. The tape was shot for the 65 anniversary of the Hero of Russia, who "never returned from that war." It includes memories of family, friends and participants of the events of that time.

The film was shot on the initiative and at the expense of the Charity Fund of Social Initiatives "People's Unity" (President - Alexander L. Rapoport) just in time for the anniversary of General Romanov. The veterans of the special forces of the internal troops of the Ministry of Internal Affairs, comrades and colleagues of Anatoly Alexandrovich, officers and soldiers of the Dzerzhinsky division gathered for the premiere. 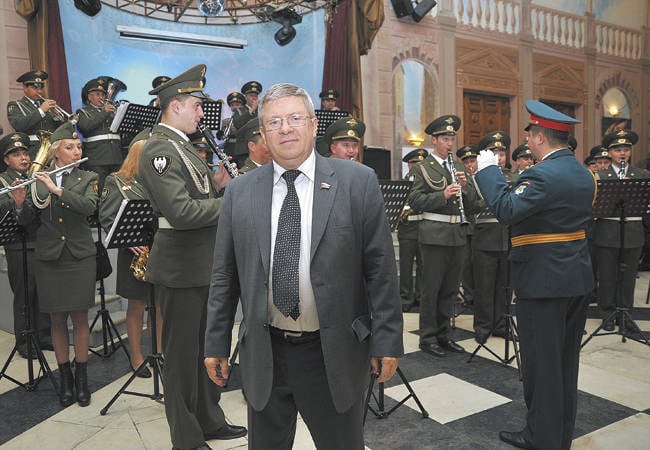 Among the guests were First Deputy Chairman of the Federation Council Alexander Torshin, Vice-President of the International Association of Veterans of the Alpha anti-terror unit, Sergey Polyakov, officers of the security forces.

Many people agree: if October 6 1995 had not been blown up in a tunnel under the railway bridge on Minutka Square (in Grozny), the history of the Chechen wars could have been different. However, a radio-controlled landmine of directional action introduced, as was planned, its irreversible adjustments.

It was with General Romanov that the moderate separatists (but, of course, not Arab and other foreign mercenaries) were ready to cooperate in certain positions.

In general, the ability to negotiate is a special art. And it's not about oratorical skill or some special tricks of conducting disputes. It is just that any qualified negotiator must very clearly understand with whom, in fact, he leads a difficult, sometimes exhausting dialogue. That is, it is necessary to find the right key, and General Romanov was able, perhaps, like no other.

“His authority grew literally by day and hour,” said Hero of Russia Vladimir Shamanov, Commander of the Airborne Forces. - And, probably, this didn’t suit the gangsters who received funding from abroad. The reason for the assassination is not Romanov’s personal behavior, but the rejection of the actions that he implemented. We know this today about the behind-the-scenes games of Berezovsky and a number of other people who built their own well-being on the blood of our statehood.

During his tenure as commander, a schedule for the disarmament of some Chechen illegal armed groups was agreed. The reception process has begun weapons among the population and the restoration of local government.

Taking the most direct part in the work of the special observation commission on the peaceful settlement of the crisis in Chechnya, Anatoly Alexandrovich carried out extensive work on the cessation of hostilities and bloodshed. 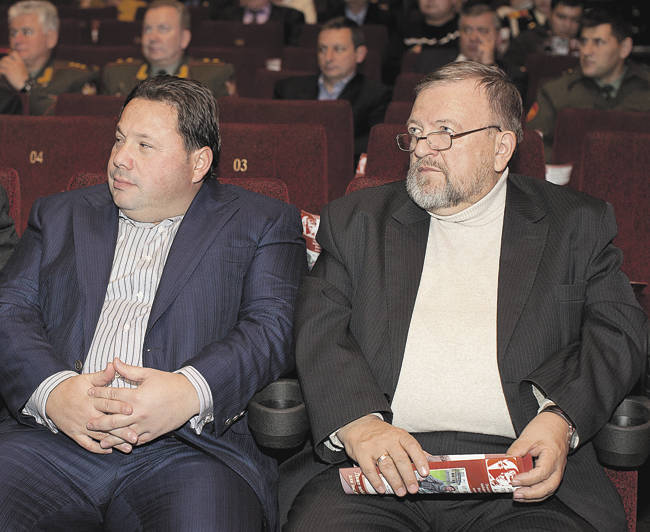 “The popularity of Romanov was very high, his influence on the situation was also very large,” recalls Lieutenant General Oleg Dukanov, Hero of Russia. - Of course, it was the main obstacle in order to develop the escalation of war further. And he was very seriously considered as the main carrier of the ideas of the world that he was trying to defend.

At that time, the protection of the defense, defense, and defense of the headquarters of the Grouping was primarily carried out by the regiment of the internal troops and the special-purpose detachment Vityaz. These guys just idolized Romanov. He still has a very rare quality in our time: he loved the people with whom he spoke and respected them. Regardless of rank and age.

... Speaking of General Anatoly Romanov, we also remember another thing - his participation, as deputy commander of internal troops, in the execution of the House of Soviets 4 of October 1993 of the year. When the "Alpha" and "Vympel" refused to storm the White House.

From the song you can not throw out the words ...

However, like the fact that inside the burning parliament building was the speaker Ruslan Imranovich Khasbulatov - a man and a politician who played a truly fatal role in turning Chechnya into rebellious Ichkeria.

And now, at the time of the assassination attempt under Grozny Minutka Square, General Romanov followed precisely to a meeting with Khasbulatov, at his invitation.

Thy ways are inscrutable, Lord!

"IN PRINCIPLE, HE WAS KILLED"

So far, the perpetrators of the terrorist attack in Grozny have not been found. We can only guess about customers. Actually, there are three main versions of what happened. What the participants in the film "Devoted Peacemaker" say.

The first version - General Romanov was blown up by militants who earned good money from the Chechen war, and therefore did not want to lose what they had.

The second version - the order came from somewhere in Moscow (and in this context, for the camarilla that gathered around Berezovsky, Romanov was dangerous).

Finally, the third version - foreign forces were behind the assassination, which categorically did not suit (and does not suit) Russia's presence in the Caucasus.

However, all these versions are not mutually exclusive. Rather - complement, mutually intertwined.

“It was, of course, the purest water set-up,” says the former prime minister and head of FGC in 1994-1995, Sergei Stepashin. - Any other military man would probably spit and say: “I will not go anywhere”. Romanov also sought to find a compromise and used every opportunity.

Despite the secrecy of the routes of Romanov, those who were behind the organization of the explosion, well knew how, at what time he would go to the meeting that day.

Together with the Romanov could die, and Vladimir Shamanov. However, the commander at the last moment sent him to Vedeno, where we suffered heavy losses that day during the battles:

- I personally told Anatoly Alexandrovich twice that the time had not yet come when one could drive a “UAZ” around Grozny. And being the deputy for combat operations in the grouping of the Ministry of Defense, I expressed my concerns and recommended strengthening security and means of transportation.

When, after the strongest explosion, Romanov was removed from the crumpled, crumpled "UAZ", few people believed that the commander could be saved. The body of the general was literally packed with fragments. “In principle, he was killed,” the head of the hospital to them will say later about Romanov. Burdenko, Major General of Medical Service Vyacheslav Klyuzhev. 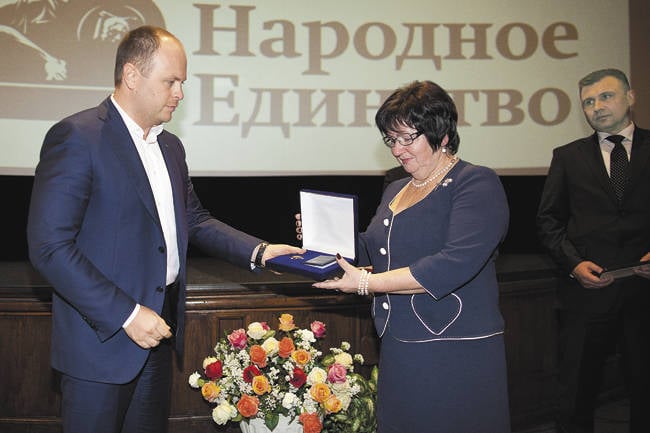 The head of the organization “Officers of Russia”, Anton Tsvetkov, hands over the Order “For Officer Honor” to Anatoly Alexandrovich’s wife of General Larisa Vasilyevna

Doctors did what they could! But fate decreed that the combat general is still alive, but he, as they say about the soldiers, "is still not back from the battle ..."

... During the presentation of the film, the First Vice-President of the Foundation, the former Minister for Nationalities Affairs, Vladimir Zorin, presented Anatoly Romanov’s wife with the prize “For Citizenship and Patriotism”. Larisa Vasilyevna became the first owner of this general civil award recently approved by the National Unity Foundation.

After the premiere, the guests did not disperse for a long time, sharing with each other memories of that troubled and ambiguous time. And everyone wanted only one thing: health to General Anatoly Romanov, his return from the War.

Ctrl Enter
Noticed oshЫbku Highlight text and press. Ctrl + Enter
We are
"Our answer to Spielberg," or Should foreign films be banned - 2Unknown Hero of Russia - who are you?
16 comments
Information
Dear reader, to leave comments on the publication, you must to register.