"We believe in another Europe." Advisor to the leader of the French nationalists explained why Ukraine should not join the European Union 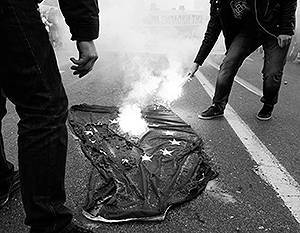 “The EU’s proposals for Ukraine were immature, poorly prepared and humiliating, and offensive for Russia at the same time,” Marine Le Pen, Ludovic de Dunn, adviser to the leader of the French National Front, told VZGLYAD. He explained why Ukraine should abandon European integration.


Kiev demanded that the European Union not “cheer” on the protesters in Ukraine.

“From different capitals of the European Union there are calls for opposition in Ukraine, so that they continue to protest, so as not to abandon the slogan of early parliamentary elections. Leading, I stress, leading politicians are stirring up people on Independence to protest, ”said Ukrainian Foreign Minister Leonid Kozhara in an interview with foreign media.

The Ukrainian side, he said, expects that the allies of the protesters from the European Parliament "will call on opposition leaders for dialogue."

However, up to now, European politicians in every way made it clear that they are interested in Ukrainian domestic dialogue is much less than the signing of an association agreement Kiev on any terms. A number of European leaders, even openly talked about the fact that the European future of Ukraine needs a new government.

However, not everyone in Europe believes that Ukraine made a mistake by refusing to sign an association agreement. Among those who consider Kiev’s position to be true, as the newspaper VIEW has already written, was the leader of the French National Front, Marine Le Pen. The party led by her consistently opposes the processes of European integration, demanding greater independence of France from the EU and international organizations.

On the European Integration of Ukraine, the position of the “National Front” regarding the European integration in an interview with the VIEW of the Council was presented by the adviser Marine Le Pen on European Affairs, Louis de Dann.

VIEW: Proponents of European integration have high hopes for Ukraine's entry into the European Union, arguing that the era of prosperity will come in the country, and the standard of living of people will rise. Are such expectations justified?

Louis de Dunn: The European Union is politically divided and broken, most countries are under the burden of debt and the burden of high unemployment. This is an illusion that Ukrainian youth and business must understand. The single European currency is on its way to collapse. Huge funds are being spent to help it survive, which can lead to tough measures, as is the case with Greece, and to the gradual destruction of the domestic market. Even if the agreement had been signed, no one would guarantee that the EU would provide for Ukrainians a simplified regime for obtaining Schengen visas.

VIEW: The Ukrainian authorities now just indicate that the terms of the association agreement were extremely disadvantageous for Kiev, as Russia has repeatedly pointed out.

LDD: The EU proposals for Ukraine were immature, poorly prepared and humiliating. They actually opposed the Ukrainian-Russian agreements, which is at the same time insulting for Russia. And the demands that the EU put forward, for example, with regard to Yulia Tymoshenko, can be regarded as a haughty interference in the internal politics of Ukraine.

We know that some US agencies and Mr. Soros are behind some agitators for the European Union. All these agreements threaten the interests of Russia. Moreover, the European Union does not want to look for an acceptable trilateral format of cooperation. Plus the issues of the Black Sea market, energy or the military aspect - no one dares to talk about it. The question of Ukraine is complicated by the fact that the country is divided into two, even into three parts, with the Russian Crimea, which can request more autonomy ...

Ukraine is a European state! She does not need that the European Union, to be self-confident.

VIEW: Your party regularly criticizes both the current state of affairs in Europe and the European Union as a whole. And what do you offer in return?

LDD: We believe in another Europe: a non-burdensome confederation of sovereign states, built on the basis of trust and respect in the framework of cooperation on common issues or on common security. This is the only possible way for today.

Such a union may extend from Portugal to Ukraine and Russia. This is a more realistic and mature, it is the best condition for peace.

Ctrl Enter
Noticed oshЫbku Highlight text and press. Ctrl + Enter
We are
Russia is being attacked because it is an alternative to the American model of global orderAs NATO instructors in the territory of a military base in Estonia, trained Ukrainian nationalists
57 comments
Information
Dear reader, to leave comments on the publication, you must to register.