December 6 2013
72
Tragic news came from south africa. Here, in the 96 year of life, the first black president of the country, Nobel Peace Prize laureate Nelson Mandela, passed away. This was told by the current head of state, Jacob Zuma. "He quietly left around 20 hours 50 minutes 5 December in the presence of relatives. Our nation has lost a great son," - quoted the words of ITAR-TASS.


In recent years, the national hero of the struggle against apartheid had serious health problems. He spent this summer in the hospital in connection with a lung infection in the house. A reanimation chamber was equipped in Mandela's house, where doctors were constantly on duty.

The UN Secretary-General Ban Ki-moon expressed his deepest condolences. “No one has done more in our time for the values ​​and aspirations of the United Nations,” said the UN Secretary General, speaking to reporters at the headquarters of the world organization.

Nelson Mandela led the state from May 1994 to June 1999. The path to this post and the liberation of the black population of South Africa from the apartheid regime was long and thorny. Struggling with the regime, Mandela spent a total of 27 years in prison. 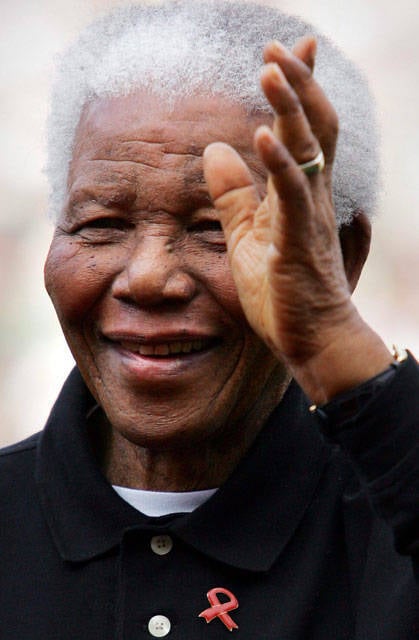 He was born 18 July 1918, near the city of Umtat. His great-grandfather was the leader of the tribe Tembu. The newborn was given the name Rolihlahla - "tearing off the branches of trees" - that is, fidget, troublemaker, troublemaker. However, it was difficult for the teacher at school to pronounce this name, and he began to call the boy Nelson - in honor of the British admiral.

But the restless name quickly made itself felt. In 1940, Mandela was expelled from college for participating in a student strike. He worked as a guard at a mine in Johannesburg, he served in a law office. Turbulent political life has stretched Mandela’s education for years. Only in 1989 year, in the last months of his conclusion, he will receive a bachelor of law degree in absentia.

In the meantime, 26-year-old Nelson joined the Youth League of the African National Congress (ANC) and soon became one of its leaders. For his activities in 1956, he was charged with treason, acquitted in 1961, but three years later he was arrested by South African security forces and sentenced to life imprisonment.

He could be released from prison only in the 1990 year, when the system of political inequality of the black population of South Africa - apartheid - was in deep crisis. During the years of imprisonment, he earned tuberculosis — even hospitalization was required in 1988, but the disease made itself felt later.

Mandela could be at liberty back in the 1985 year - then South African President Peter Botha offered release to the prisoner in exchange for giving up the political struggle, but he refused. Over the years, gained worldwide fame. In South Africa and in other countries, a movement was launched to liberate him.

After leaving prison, already in 1991, Mandela headed ANC. In 1993, he and South African President Frederik de Klerk received the Nobel Peace Prize - each of them in their own way and in their own place did their best to put an end to the apartheid regime. And next year, Mandela is already the head of South Africa. Under his leadership, a new constitution of the country was developed and adopted; the document now guaranteed all South Africans equal rights.

Mandela ended his political career in the 1999 year - he simply did not nominate himself for a new term. But active social life continued. In 2011, Nelson Mandela topped the list of world leaders with an impeccable reputation. The survey, which was attended by more than 50 thousands of people from 25 countries, was conducted by Reputation Institute.

Mandela was married three times. The last time was in 1998: he took Graca Machel as his wife, then she was 53 of the year - the widow of the President of Mozambique, Samora Machel, who died in a plane crash. The first black president of South Africa left three daughters, many grandchildren and great-grandchildren. In 2012, one of the daughters, Zenani Mandela Dlamini, became the South African ambassador to Argentina.

Ctrl Enter
Noticed a mistake Highlight text and press. Ctrl + Enter
We are
Ukraine sent an angry letter to the UN headquarters in connection with the speech of Ban Ki-moon in St. PetersburgSouth Africa called on The Hague to investigate a NATO operation in Libya
72 comments
Information
Dear reader, to leave comments on the publication, you must to register.