The more actively the state fights against corruption, the greater its scale 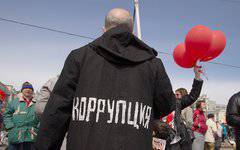 At the same time, there is no understanding of what corruption is.


The topic of corruption and, accordingly, the fight against corruption is transformed into a kind of mantra. Everybody is fighting against corruption - the Ministry of Internal Affairs, the FSB, the Investigation Committee, the prosecutor's office, journalists, the state, the opposition, the official press, the opposition press ... Information was also confirmed about the creation of a special anti-corruption department in the presidential administration, although immediately after the appearance of this information it was strongly refuted.

It is said that when Andropov created a special department in the KGB to combat ideological sabotage, he was warned against this step, saying that the very existence of such a structure meant the institutionalization of interest in preserving and expanding ideological sabotage and the people involved in them. After all, if there are specialists in a certain field of activity, they are interested in maintaining this field of activity, that is, in their relevance.

At the same time, the very concept of “corruption” remains, on the one hand, semi-mythical, and on the other, not completely understood. According to surveys, about three quarters of the respondents in the whole country say that they have never been in any capacity as participants in corrupt practices. On the other hand, when polling such a specific audience as the students of Echo of Moscow, already three-quarters say that they dealt with and took part in corruption. Strictly speaking, this is no contradiction at all, but an indicator of which social groups are students of Echo of Moscow.

However, more importantly: there is no clear idea of ​​what is called corruption in society. In the proper meaning of the term, corruption is corruption, corruption, that is, a state of affairs when, say, personal gain is carried out to the detriment of the tasks and functions that a particular person must occupy.

Russian law, as is often the case, interprets this much more complicated and unintelligible. But that's not the point. It is just that sometimes a similar phenomenon is often mixed with corruption - one that is usually called embezzlement. That is, a situation where a carrier of state authority begins to consider the "state treasury" (that is, state-owned resources) as subject to personal use and personal appropriation.

From a certain point of view, the word "embezzler" sounds in many ways worse than the "bribe taker", because the former is robbing the state and the people. The second attitude is much more tolerant, especially when it comes to a bribe, and not about extortion. It means that the first is the sale of one or another of his business decisions to the detriment of the interests of the case for the interests of the briber, and the second is the receipt of payment for the conscientious performance of his duties.

However, the difference is that if damage to the interests of a business for personal gain is always damage to the interests of the business, and why it bears the nature of corruption and corruption, then embezzlement, that is, appropriation of state or public resources, can play different roles in different situations, and in some cases to the detriment of the state, and in others to turn out to be profitable for it.

Naturally, in an institutionalized, stable and established state, the appropriation of state resources is assessed unambiguously negatively. At the earlier stages, it is, paradoxically, profitable, and indeed is almost the foundation of statehood. The most textbook and replicated example is the embezzlement of Alexander Menshikov and Grigory Potemkin: it is probably impossible in principle to calculate exactly how much they appropriated the treasury. Only what their state activities brought is still much more. No matter how much gold Potemkin appropriated - the development of Little Russia, Crimea and the creation of the Black Sea fleet still more expensive. No matter how many millions Menshikov squandered, only Noteburg and Poltava also paid for all this.

And the point is not in the sacramental "Great Allowed." The fact is that this is exactly how statehood is built: through creating in the carrier of state functions a sense of personal gain from state success. The dialogue from the cult film - “And you don’t confuse your pocket with the state!” - “And by the way, I’ve put it to watch the state’s interests!” (As my own) - in fact, much deeper than it seems first glance.

Because when for a state representative service to the public interest becomes his personal matter, this means that his personal interest is not separated from the state, and he gives himself up to the public interest in everything. And when he is separated, he clearly knows that until six in the evening he serves the state, and after six he lives in his own interests, and state affairs are indifferent to him. It is clear, of course, that it is best when he does all this solely for the sake of ideals, but, by the way, ideals are also a form of personal interest. Most likely, Menshikov could be bribed, but not in matters relating to the devotion to Peter and the state interests of Russia. As, however, and Potemkin.

Statehood generally begins with the fact that someone who has declared himself king of a certain land sends his colleague to a certain edge and entrusts him to ensure the loyalty of this land, protect its borders from neighbors, collect residents' taxes, form a squad and participate in military campaigns of the king, and also gives him the right to "feed" from this "county", that is, enrich himself at his expense.

It is clear that this is called “early feudalism” and, in theory, should have remained far in the past, and in the XXI century it would be necessary to have other forms of statehood. But one important detail needs to be taken into account: 22 a year ago, the country's statehood was almost completely destroyed and further destroyed all 90-s. Of course, if we had the Bolshevik Party and the shelves of the armed proletariat under our hands, then in the next 10-15 years it would be possible to create something more, but what if there aren't any?

In this case, you can only create something that is now, and in this state either some form of personal and state interests can be combined, or the statehood will have nothing to add, and it will be replaced by criminal structures or the colonial administration.

Here it is no longer a matter of whether it is good or bad from a moral point of view, but that in fact it is really like this: “embezzlement”, the identification of state resources with personal resources at this stage is the material of statehood creation, its cement. And here we are faced with the most important and most important. If this is indeed the case, then the “fight against corruption” at this stage of the country's development is the destruction, fragmentation of that primary material, “cement”, the material from which statehood is formed.

In Russia, statehood was practically destroyed at the end of the 1980s - the beginning of the 1990s. The process of its destruction continued in many respects and all 90-s. In 2000, it somehow began to recover. And just with the development of this process - approximately from the middle of the zero years - the topic of accusations of corruption in the government is becoming more active in society, and it is being activated by the representatives of the forces and interests of 1990, who have lost their dominance in political and economic life. Over the years 5-8, this topic has become constantly exaggerated and fashionable, and the government itself, accused of corruption, has joined in the relaying of this topic.

Similarly, at the end of 1980, the natural and healthy pursuit of the development and ascent of socialism to its higher level was used as a means and method of its destruction. And now, as then, the power itself falls into a trap and becomes a means and a ram of destruction for which, as it seems to her, she begins to fight for the improvement.

And this replacement of the real goal with the goal of a false one is carried out (quite deliberately and technologically) by those who pursue their real goal - to prevent a strong state from recovering, having done so that it itself, as it strengthens, begins to struggle more actively for its own destruction. .

Ctrl Enter
Noticed oshЫbku Highlight text and press. Ctrl + Enter
We are
On whose corpses Andropov and Gorbachev came to power
48 comments
Information
Dear reader, to leave comments on the publication, you must to register.