Libya went to life according to Sharia 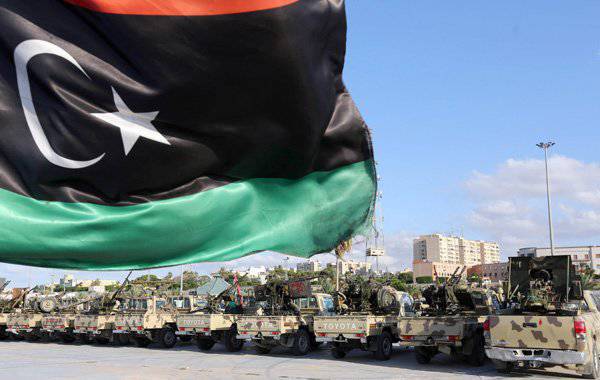 More than two years have passed since the NATO bloc and its Arab allies conducted a military operation to destroy the regime of Muammar Gaddafi in Libya. The war was declared by Washington, Paris, London and the League of Arab States as "humanitarian intervention" in the interests of the civilians of the Libyan state. However, the establishment of "democracy" did not lead to the triumph of democratic and humanitarian values, but to the victory of overt banditry, archaic tribal relations and Islamism. So, Libya, despite the protests of the West, decided to go to Sharia norms. As many experts predicted, the victory of the “Arab spring” inevitably leads to the Islamization of the countries of North Africa, the return of archaic relations. Only the dictatorship, the authoritarian regime, can preserve the secularism of the state in the Near and Middle East. In particular, in Egypt, the secularism of the country so far retains only the army. Moreover, it cannot stop the process of de-Christianization of the country.


On Tuesday, the Libyan parliament - the General National Congress - voted to make Sharia the basis of the country's legislation and the "basis of the activities of the institutions of government at all levels."

Sharia is a combination of legal, canonically traditional, moral, ethical and religious norms of Islam (from Arabic. “The right way”). Now all new laws must comply with Sharia law, and the old ones will be tested for compliance with Islamic norms. For this, a special committee will be created. The provisions of criminal and financial law will also be formed on the basis of Sharia. Thus, loans in Libya can become interest-free, as the Sharia forbids usury.

To say that the transition to the Sharia of Libya, which is actually ruined into a number of state formations and autonomous tribal territories, turned out to be a surprise, it is impossible. Thus, almost immediately after the assassination of Gaddafi, at the ceremony of the abolition of the Libyan Jamahiriya, the head of the Transitional National Council, Mustafa Abdel Jalil, said that the Islamic state of Libya would accept Sharia as the main source of legislation. At the same time, the head of the Transitional National Council promised that the new authorities would adhere to “moderate Islam” and defeat the radical Islamists.

However, in a country of "moderate Islam", Islamist movements have flourished to this day. Libya became the center of supply weapons to neighboring countries, to Syria, where the struggle of the legitimate authorities and gangs continues. Libya is also the largest supplier of "cannon fodder" - militants. The rampant unemployment, the presence of a significant mass of young men with combat experience, and the free distribution of radical ideas created an excellent ground for the mercenary market and the “ideological” jihadists. Ethnic and racial cleansing (persecution of blacks), the massacres of Gaddafi’s supporters, the facts of atrocities and torture in prisons have not only remained unpunished, but even not really investigated.

Naturally, in the European Union such news caused concern. The European Parliament's rapporteur on Libya, Anna Gomez, believes that “the introduction of Sharia law is not based on a democratic decision-making process.” Gomez stressed that Libya must adhere to generally accepted norms, respect human rights. Sharia is a matter of concern, as it contains norms that oppress women's rights and are clearly contrary to human rights. EU authorities have warned that they have learned from the “Arab Spring” and will refrain from supporting the government, which violates international obligations, in particular with regard to respect for the rights of prisoners of war and the rights of women.

Some Sharia norms that contributed to the construction of a fair society were also implemented by Gaddafi. So, when it banned usury, introduced zyakat - an additional tax in favor of the poor. At the same time, Gaddafi was against the idea of ​​the caliphate, since the people should not expose the neck to the yoke of the power of the caliph, who concentrated spiritual power in his hands.

In general, the Islamic inclination of the authorities, who are replacing the “Arab spring” with authoritarian, but secular regimes, should not be surprising. The secular regimes in the Middle East, including the regime of Saddam Hussein that fell in 2003, were oriented towards the USSR (before its fall), the countries of Western Europe and the USA. They carried out modernization in society, tribal relations and the most archaic norms, including religious ones, gradually faded into the past. It was necessary for several generations for the population of the region to move to a different stage of development. The same processes were going on in the Libyan Jamahiriya. There was a growth in the literacy of the population, its education, the urban population grew, the secular intelligentsia, tribal relations were destroyed. However, the violent destruction of secular regimes brought the region back to the past, archaization became the main trend in public life.

Secular intellectuals, Westernized youth, liberal-democratic movements that, together with the Islamists (and at first they often represented an insignificant element of the revolutionary movement), overthrew the “bloody regimes” and paved the way for the jihadists. Dictators were kept in the yoke of radical Islamists, they were deep underground. In the future, the Islamists received complete domination or occupied important positions.

Western ideology cannot resist Islam. The bulk of the population, the same poor people, the peasantry in Egypt, are guided by Islam. Islamists are available to answer basic questions: "Who is to blame" and "What to do." In this regard, we can recall the experience of the February 1917 revolution in Russia. Autocracy was destroyed by liberal-Masonic circles, aristocrats, generals, bankers, industrialists and intellectuals focused on Western values. However, they could not hold power in their hands, since their values ​​and concepts did not correspond to the basic values ​​of the traditional, patriarchal Russian population (peasantry). The Russian radicals - the Bolsheviks - seized control in their hands, having received the support of the majority. Although before the February Revolution they were a marginal group that had no chance of success.

We see a similar picture in the Near and Middle East, westernized groups of people became the main driving force of the revolution in Tunisia, Libya and Egypt. However, they can not give a holistic program of development of the country, to solve internal problems. As a result, Islamists intercept the power, or get such strong positions that they have to be considered. The Islamic political forces are supported by the population not only because Islam is the traditional religion of the region, but also because of a certain “leftism”. Islamists declare the values ​​of a just society (socialism), a fair distribution, from rich to poor, help for the sick, disadvantaged and orphans, free social benefits and so on. With such a strong foundation, the Islamists are winning up. At least, at first, as long as their cases do not prove otherwise.

In addition, all Islamist movements are representatives of the global "Islamic project". This project is an alternative to Western. With a reasonable approach, which, by the way, Gaddafi applied, the Libyan leader was able to make a successful synthesis of Islam and socialism (Libyan Jamahiriya), the Islamic project could unite a significant part of the Muslim world, at least its Arab part. Creation of the Arab (Islamic) confederation, union could solve a lot of problems. In particular, Gaddafi began to form such a union in Africa, but this was one of the reasons for his death. Both Western countries opposed him, as his project violated their monopoly power in Africa, and the Arab monarchies, which have their own project of consolidating the Arab world, but more archaic, not meeting the interests of ordinary people.

The Islamic Project, which is usually represented as a bearded Mujahid with the Kalashnikov in his hands, has three versions:

- Koranic type, aimed at restoring justice in society. A similar society built Gaddafi. This is a synthesis of Islam and socialism, a society of social justice, where the interests of the majority of the population are respected. When a leader like Stalin appears, the Arab-Muslim world can unite, at least from North Africa to the borders of Afghanistan and Pakistan. This will allow the union: to have nuclear weapons (available from Pakistan and Iran’s developments), solving the security problem; huge reserves of hydrocarbons and other natural resources with reasonable use will create the basis for an industrial breakthrough; the rejection of individual armies in each country and the creation of a unified armed forces will save huge amounts of money; the presence of a large population will provide an opportunity to create a large domestic market; the introduction of a single monetary unit on the basis of gold will give financial independence, etc. Such a union would solve a lot of internal problems, turn now running wild, degrading territories into flowering areas. However, such a union is a threat to the Western project, so all its shoots are ruthlessly destroyed;

- the union of the non-slave type, where the “elite” lives in luxury, killing time for hedonism, and the bulk of the population is “two-legged tools”. This is a project of Saudi Arabia and its allies - the Arab monarchies of the Persian Gulf. The Gulf Cooperation Council is at the core of this project. The GCC has a common currency project, a single armed forces. Perhaps the appearance of its nuclear weapons soon (with the help of Pakistan). Riyadh already has the Royal Saudi Strategic Missile Forces. The Arab "oil elite" has built a very unfair society. Sheikhs bathe in luxury, “indigenous Arabs” mostly sit back, the main work is done by migrant workers from other countries. Saudi Arabia is a model of a consumer, parasitic state, exploiting natural resources, migrant labor, indifferent to the problem of building a society of creation and cognition. Moreover, it is dominated by a branch of radical Islam, which considers all other directions to be “unclean”. Saudi Arabia, with the participation of other monarchies, is one of the main sponsors of jihadist organizations and cells around the world. The Anglo-Saxons and the Saudis spawned the "collective Hitler" - the network movements of the radical Islamists who initiated the transformation of the Middle East into the main front of the global war. This war, according to its creators, should deliver deadly blows to old Europe, Russia, India and China;

- The third scenario is a victory of the past, an involution. Huge areas of Eurasia will be turned into Somalia, Afghanistan or Yemen (where 75-90% of the population are drug addicts who sit on a cat). This is the victory of the “bearded mojahed with a gun”. Rollback to the past, the archaization of a significant part of humanity. The sharp decline in the population due to a sharp drop in the level of education, health care, constant slaughter between clans, tribes, different religious groups for water, land, sources of income, etc.

I must say that the draft Arab monarchies (Arab or World Caliphate) will eventually lead to the implementation of the third scenario. The masters of the Western project count on this. The Saudis will be defeated, and new areas will collapse into inferno.

Currently, Libya is rapidly moving towards the complete victory of the third scenario. If Bashar Assad suffers a defeat, the same fate awaits the secular yet Syrian Arab Republic, and there is no hope for the moderation of the leaders of various gangs. The massacre of non-believers, rollback to medievalism and savage cruelty, permission to rape "unfaithful" women, destruction of the country's infrastructure, famine, lack of essential goods, the flight of hundreds of thousands of people into lands not controlled by official Damascus have now become the norm of life.

Ctrl Enter
Noticed oshЫbku Highlight text and press. Ctrl + Enter
We are
Judgment in Tripoli. Saif al-Islam Gaddafi sentenced to deathLibya: after Gaddafi
60 comments
Information
Dear reader, to leave comments on the publication, you must to register.