December 6 2013
10
The Vietnam War became a testing ground for new weapons and military equipment. Among other “test” vehicles in Vietnam, the light airborne tank M551 Sheridan passed. Active combat operations revealed the advantages and disadvantages of this combat vehicle. In addition, as a result of the war, the US military adjusted its requirements for promising lungs. tanks. In the early eighties, several companies immediately began developing promising light tanks that have the positive features of the M551, but without its flaws. Three companies took part in the AGS (Armored Gun System - Armored Gun System) program, each of which presented its own version of a promising combat vehicle. 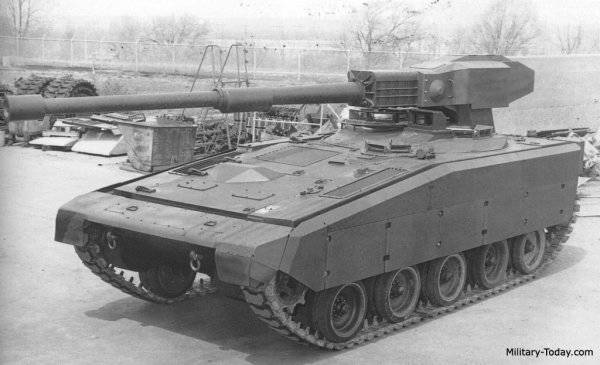 The company Teledyne Continental Motors (TCM) began to develop its armored vehicle, which for several years of development and testing has not received its own name. During design and testing, the prospective tank was designated the same as the entire program as a whole (AGS), but in some sources it appears under the index formed from the name of the developer company - TCM-20.

The design of the new light tank began in the 1982 year. Specialists of the company Teledyne Continental Motors planned to create a modern tank with a small combat mass, but at the same time capable of fighting with armored vehicles of various types. In the future, it was supposed to upgrade the car, providing it weaponssuitable for the destruction of main tanks. In addition, the customer required to ensure the possibility of landing with military transport aircraft and crossing water obstacles by swimming.

Such a list of requirements made the designers look for non-standard solutions with which one could make a light combat vehicle with high firing characteristics. To reduce the weight of the tank, it was decided not to use the classic manned tower. This idea of ​​TCM specialists has determined all the main features of the appearance of a promising machine.

In order to increase survivability without significant thickening of the armor and, consequently, weighting of the structure, it was decided to move the engine-transmission compartment to the front of the armor case. In addition, the upper frontal sheet was located almost horizontally: at an angle 82 ° to the vertical. The undercarriage was closed with screens, and the bottom of the hull was made of two sheets of aluminum armor with a filler between them. Fuel tanks and ammunition laying were proposed to be separated from habitable volumes with hermetic partitions. According to reports, the applied reservation of aluminum and steel alloys protected only from bullets of large-caliber machine guns and splinters. 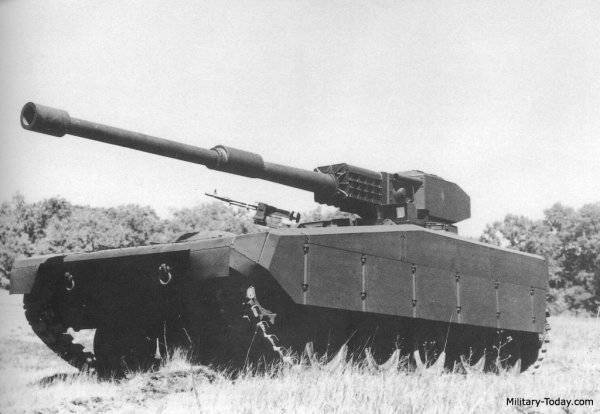 The control compartment with the driver's seat was placed next to the engine, to the left of the machine axis. Two other crew members, the commander and gunner, were stationed in the fighting compartment in the aft hull.

In order to reduce the cost of the car, the engine and transmission were borrowed from the M2 Bradley infantry fighting vehicle. A new light tank was equipped with a Cummins VTA-903T diesel engine with an 495 horsepower. With the estimated combat weight of the machine no more than 19-20 tons such a power plant could provide a sufficiently high driving performance. The undercarriage was created on the basis of the corresponding units of the M109 ACS, but the new tank had only five road wheels with a hydropneumatic suspension on each side. During the tests, a prototype of a new tank accelerated along the highway to 80 km / h, overcame walls up to 84 cm and ditches with a width of 2,5 meters.

The light tank was relatively compact. Its total length with a gun did not exceed 7,5 meters, width - 2,7 meters, and height - 2,5 meters. The dimensions and combat weight of the vehicle made it possible to transport it with existing military transport aircraft. In the future it was supposed to check the possibility of landing.

At the stern, the AGS / TCM-20 tank was supposed to carry a turntable with a gun. To reduce the size and facilitate the construction, only the tool installation system, the gun itself, the armored casing and a piece of equipment were located on the platform. Such a placement of weapons reduced the weight of the machine and increased survivability, but required the creation of a remote control system.

The 105-mm rifled gun M68A1, which is the next version of the famous English gun L7, was chosen as the main weapon of the advanced tank. For use on the tank TCM-20 this gun has received new recoil devices and a muzzle brake. The use of such measures has reduced the recoil momentum to acceptable values. With the gun was paired machine gun M240 caliber 7,62 mm. Instrument guidance systems were coupled with a two-plane stabilizer. Vertical pickup angles ranged from -10 ° to + 18 °. Horizontal guidance - a circular, turning the entire gun platform.

In view of the placement of weapons made by the designers of the company TCM had to develop an original automatic loader. It consisted of a shop for nine unitary shells and two drums with ten cells for ammunition. Thus, the AGS / TCM-20 tank had ready-to-use ammunition in 29 shells. Another 11-16 shells could be placed in the laying inside the crew compartment. Apparently, after the ammunition was used up in the automatic loader, the crew had to reload the shells from it in the fighting compartment. On tests, the automatic loader ensured a firing rate of up to 10 shots per minute. 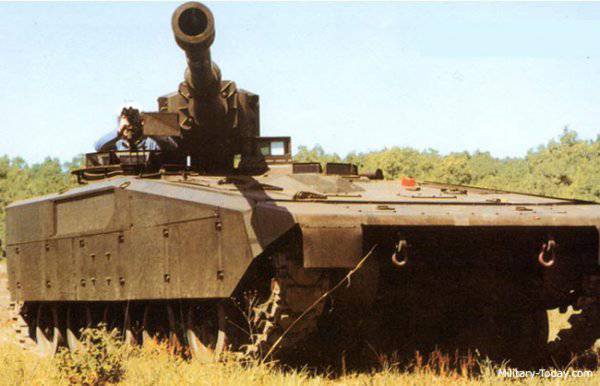 Some sources claim that the design of the AGS / TCM-20 tank turret allowed for the future to install a larger-bore smoothbore gun - 120 mm. Large loads on the structure were supposed to be compensated by lengthening the hull with the installation of an additional support roller on each side. After such a modernization, a new armored vehicle could be compared in its firepower with modern main tanks. Perhaps the designers of the company Teledyne Continental Motors developed a similar version of the modernization of the light tank, but the prototype built carried a tool caliber 105 mm.

The tank commander was located inside the hull, to the right of the vehicle axis, the gunner was on the left. Periscopic observation instruments allowed them to monitor their surroundings, but none of the crew members could inspect the entire space around the vehicle. The fact is that the field of vision of the commander's device was 330 ° wide, the gunner's 220 ° wide. The gunner’s workplace was equipped with a two-channel (day and night) sight Texas Instruments CVTTS Mk.II with an integrated laser rangefinder, as well as an additional telescopic sight. 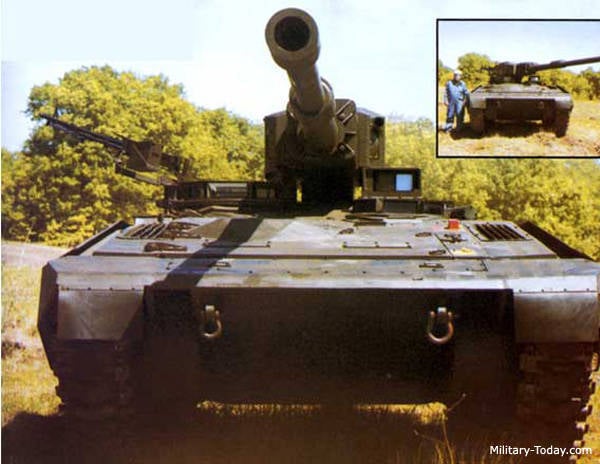 The development of the AGS / TCM-20 light tank began in 1982, and at the end of 83, Teledyne Continental Motors built the first prototype. It is worth noting, the construction of the building, equipped with all the necessary units, turned out to be less of a challenge than assembling the original tower. Because of this, an experienced tank received a tower only at the end of 1984 of the year. The official presentation of a promising combat vehicle to the customer took place in May 1985.

During the tests, the light tank AGS / TCM-20 showed fairly high performance. The speed on the highway reached 75-80 km / h, and the fuel was enough for a march of 480 kilometers in length. In terms of firepower, the tank was almost indistinguishable from other equipment using the L7 gun or its modifications. The automatic loader was the reason for praise and criticism at the same time. It provided a high rate of fire at the level of 10 shots per minute, but problems with some of its elements and limited ammunition ready for use caused complaints.

Almost simultaneously with the AGS / TCM-20 tank, a similar CCVL armored vehicle from Food Machinery Corporation appeared. The design of CCVL did not use bold technical solutions, although the composition of its electronic and sighting equipment promised a significant increase in combat qualities. In the early nineties, the Pentagon Commission compared three light tank projects submitted to the AGS competition, and recognized the CCVL as the best machine. In the future, based on it was created light tank M8. 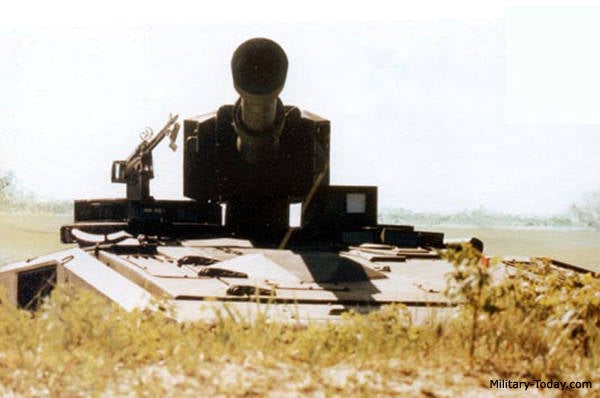 The end of the AGS competition led to the curtailment of work on the light tank project of Teledyne Continental Motors. It is worth noting that the AGS program did not lead to the expected results. The work on the CCVL and M8 projects continued until the mid-nineties, and as a result was discontinued. In 1996, it was supposed to sign the first contract for the supply of M8 tanks, but at the end of the year, the US military announced that it was abandoned for financial reasons.