December 6 2013
13
For half a century, the foundation of the US self-propelled artillery is the ACN of the M109 family. The last modification of this self-propelled gun called M109A6 Paladin was put into service in the early nineties. Despite the fairly high performance, the “Paladin” self-propelled gun does not fully meet the requirements for modern self-propelled guns. For this reason, soon after the start of production of combat vehicles, the M109A6 launched a new project XM2001 Crusader (“Crusader”). While still in its earliest stages, this project received a lot of praise. Sometimes it was argued that thanks to the new self-propelled gun in the artillery there will be a real revolution.

The first studies on the subject of promising artillery systems began in the mid-eighties, but projects of such combat vehicles appeared much later. In the mid-nineties, when the development of the ACS XM2001 began, it was planned to complete the project over the next ten years. The first serial self-propelled guns were planned to be built in the 2004 year, and in the next to begin their operation in the army. It should be noted, the timing of the implementation of a particular part of the project has been repeatedly changed. So, at the beginning of the two thousandth, when the experimental self-propelled gun "Crusader" was put to the test, the adoption was transferred to 2007-2008 years. The need for troops was estimated at 800 combat vehicles.

The project is promising self-propelled developed company United Defense and General Dynamics. In accordance with the requirements of the customer, the new combat vehicle had to surpass the existing equipment in a number of parameters. It was necessary to increase mobility, fire efficiency and survivability. In addition, it was necessary to reduce the complexity of maintenance. Such requirements led to the fact that development companies decided to use a large number of new automated systems, and this ultimately had a decisive influence on the appearance of the self-propelled artillery installation.

During the development of the project ACS Crusader several times changed its appearance. For example, in the early versions of the project, the combat weight of the self-propelled guns exceeded 60 tons. However, the requirements relating to mobility, forced to change the project, reducing the combat weight of the machine almost one and a half times - to 40 tons. In the future, this parameter has changed several times in small limits. The dimensions and weight of the self-propelled guns were reduced primarily because of the need to transport it by existing military transport aircraft. 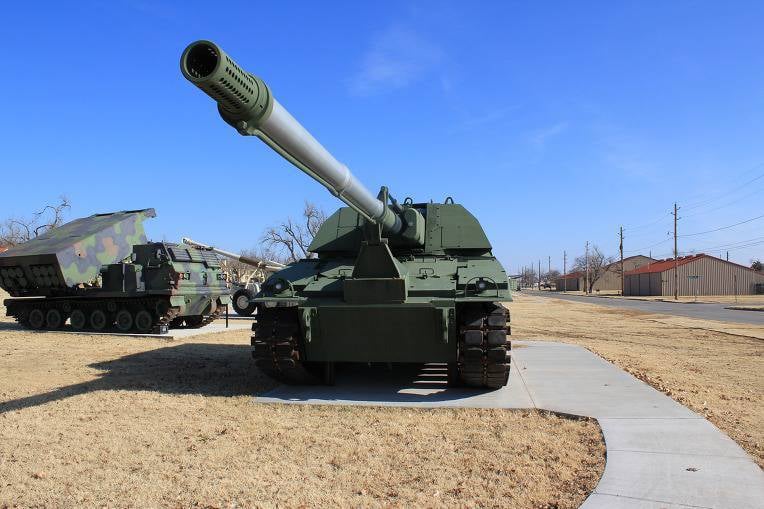 In the course of the XM2001 project, the crew was supposed to be reduced, which accordingly affected the layout of the internal hull volumes. Thus, in the front part of it, they placed the department of management with the jobs of three crew members (driver, commander and gunner). In the middle and aft parts of the hull were the engine-transmission and combat compartment. The gas-turbine engine LV100-5 with the power 1500 hp was considered as a power plant. and diesel Perkins CV12 of the same power. And he and the other engines could provide high-mobility ACS. In addition, it was assumed that the use of a gas turbine engine will allow to unify several types of modern armored vehicles. In the end, the prototype ACS was a gas turbine engine.

The new tracked undercarriage consisted of seven road wheels on board and a rear drive wheel. Hydropneumatic suspension, according to calculations, could provide enough maneuverability and smoothness, even at high speed. During the tests, the ACS XM2001 accelerated on the highway to the speed of 67 km / h. When driving over rough terrain, it was possible to develop the speed of 48 km / h. Cruising on the highway exceeded 400 km. With such mobility, a promising self-propelled gun could quickly leave the firing position and avoid retaliation.

The entire crew of the Crusader self-propelled gun was to be located in the general management department, which placed special demands on the electronic equipment of the combat vehicle. Crew jobs were equipped with a complex of radio-electronic equipment designed for navigation, calculating guidance angles, monitoring the state of machine units, etc. The self-propelled gun was also equipped with a tactical information exchange system allowing the crew to use third-party target designation. 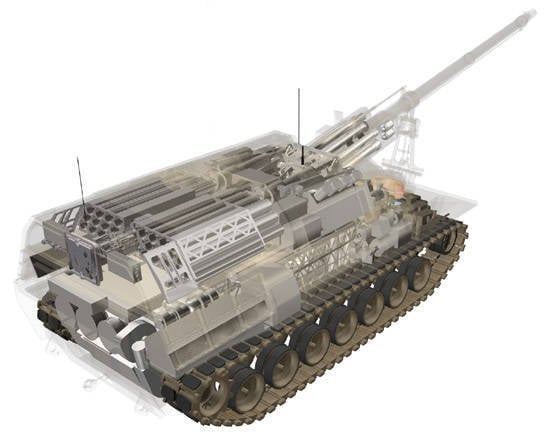 The transfer of crew jobs to a single volume inside the hull, isolated from the crew compartment, led the project authors to create automated systems for the supply of ammunition and weapon control. An equipment was installed inside the slewing turret, capable of independently obtaining ammunition from an armored carrier, placing them in stowages and loading a weapon. The gunner or commander could only give a command to start the desired procedure and, if necessary, indicate the type of ammunition required. All further operations were performed automatically. The automatic systems were also used to guide the gun, which were responsible both for calculating pickup angles, and for turning the turret or raising the barrel. The system of installation of the gun made it possible to shoot with the angle of elevation of the trunk from -3 ° to + 75 °.

In the XM2001 self-propelled gun tower it was proposed to install an XM297 gun of 155 caliber of millimeters with a barrel of 56 caliber length. This tool already at the stage of calculations showed its high prospects in relation to the range of fire. To improve the accuracy when firing uncontrollable shells, it was equipped with an integrated liquid barrel cooling system. The problem of reducing recoil was solved by the original recoil devices and the muzzle brake. When developing a tool, it was decided to chrome the barrel bore and chamber to reduce wear.

The XM297 gun retained the separate loading of the traditional for its class of artillery. For greater flexibility, it had to use the MACS modular propellant charge system. By varying the number of modular charges, it is possible within certain limits to adjust the firing range. In the automated styling of the combat department of the Crusader ACS, 48 shells of various types and 208 propellant modules were placed. The number of modules being sent to the chamber was calculated immediately before the shot, along with other shooting parameters.

While working on the project of the new ACS, the employees of the company United Defense and General Dynamics paid much attention to the rate of fire. An important "skill" of the modern artillery system is the method of firing MRSI (the so-called barrage of fire). This means that the self-propelled gun can make several shots, combining the power of the propellant charge and the angle of elevation of the weapon, with the result that several projectiles fall on the target with a minimum interval. This method of shooting allows you to cause damage to the enemy for the minimum time before he has time to respond. In this regard, the project XM2001 used a whole range of measures aimed at improving the rate of fire.

The main work to ensure a high rate of fire fell on the automatic loader. Within a few seconds, she had to remove the projectile of the required type from the installation, send it to the chamber, extract the specified number of propellant charge modules, send them to the chamber, then close the bolt. With a calculated rate of fire at the level of 10 shots per minute, the automation had to do all these operations in 4-5 seconds. To increase the reliability, the XM297 was equipped with an original laser ignition system. The MACS charge modules had a completely combustible casing, which eliminated the automation from having to remove the cartridge case or pallet. When shooting according to the method of MRSI, the Crusader could make a series of up to eight shots.

The XM297 can use the entire range of 155-mm shells that existed in the late nineties. Depending on the task being performed, the Crusader self-propelled gun could fire high-explosive, smoke, incendiary, cluster type DPICM (anti-tank and anti-personnel) or SADARM (anti-tank). When using conventional shells, not equipped with a gas generator or rocket engine, the firing range reached 40 km. The nomenclature of ammunition for the new SAU was planned to include the Excalibur guided projectile with a maximum range of up to 57 km.

Simultaneously with the XM2001 self-propelled artillery installation, an armored XM2002 ammunition carrier was created as part of the Crusader project. Both cars had a common chassis and were unified by 60%. The carrier of ammunition differed from self-propelled guns in that on the roof of its hull, instead of a tower, there was an armored casing and equipment intended for storing and transferring projectiles and propellant charge modules. In addition, the carrier could carry fuel. All ammunition reloading and fuel transfer operations were carried out automatically. Crews of two cars only controlled the course of the process, without leaving their jobs. At full load of ammunition and fueling took no more than 12 minutes. The crew of the carrier consisted of two people.

High speed, rate of fire at the level of 10 shots per minute, the possibility of firing by the method of MRSI and other features of the project "Crusader" were the reason for many positive assessments. According to various experts, the survivability of the XM2001 ACS was 3-4 times higher than that of the M109A6 Paladin. Combat effectiveness was also high. Calculations showed that in 5 minutes a battery of six self-propelled guns could bring down tons of shells on the enemy’s heads to 15. For this, however, the combat vehicles needed to work together with the ammunition carriers.

At the end of 1999, the first prototype of the advanced ACS was put to the test. The XM2001 combat vehicle fully confirmed all the calculated characteristics, although some problems were identified during the tests, which were soon fixed. Trips to the landfill and shooting at conventional targets continued for several years. So, in November, the 2000 of the year the self-propelled gun "Crusader" reached a rate of fire in the 10,4 shot per minute, which was the maximum value of this parameter during the tests.

High running and firing characteristics made the ACS XM2001 Crusader an outstanding example of artillery equipment. However, in May 2002, after a series of successful tests, the Pentagon notified United Defense and General Dynamics of the termination of the project. The reason for this was the economic features of the promising self-propelled artillery. The use of a large number of new automated systems designed specifically for the new ACS, has affected its price. According to the calculations of that time, each of the Crusader series machines would have cost the budget 25 million dollars. For comparison, the German self-propelled howitzer PzH-2000, slightly inferior to the XM2001 in performance, at that time cost no more than 4,5 million.

Careful analysis of the characteristics and capabilities of the new self-propelled gun clearly showed that superiority in firepower or survivability cannot compensate for a significant loss in price. Because of this, the work on the Crusader program was curtailed. It should be noted that the developments on this project are not lost. Shortly after the project was closed, the company United Defense received a new contract for the creation of promising artillery systems. This order of the military meant the improvement of existing designs for use in new projects.