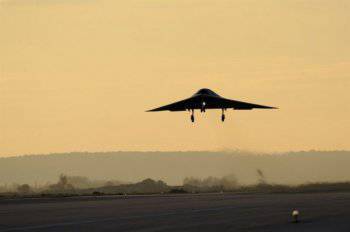 Currently, several countries of the world are almost publicly engaged in the creation of low-profile UAVs. In particular, the USA is developing the X-47B deck apparatus and is already using RQ-170 Sentinel, the United Kingdom - Taranis, and France - nEUROn. Similar work is also being carried out in China (under the Lijian project). Against the background of such vigorous activity, the silence of one of the largest players in the industry of unmanned systems for a long time caused bewilderment of specialists. Recently, the situation began to clear up.


Currently, Israeli companies are involved in a number of programs related to the development of stealth technologies, conducted mainly in the United States. Including Israel produces wings for the fifth-generation American fighter F-35 Lightning II. Production is carried out at Israel Aerospace Industry (IAI) factories under a contract with Lockheed Martin Corporation. The results obtained can be used in the new generation of unmanned vehicles from Israeli companies.

The need for an unobtrusive Israeli air force drone is extremely high, since the military has to act on the territory of states with varying degrees of prohibition of air access. A few years ago, the Israeli military turned to drones manufacturers and set themselves the task of creating a new generation reconnaissance and drone UAV. According to its parameters, the new device should belong to the heavy class of drones, have take-off weight of more than 20 tons and take on board at least 4 tons of weapons. There were also requirements for flight duration (at least 10 hours), range (3-4 thousands of kilometers) and a high degree of autonomy of action.

Flightglobal, citing an unofficial source in the government of Israel, reports that defense industry enterprises are developing a "large" unmanned aerial vehicle with extensive use of stealth technology in various radar and infrared detection ranges. In addition, it is planned to equip the new UAV with engines based on the E-Fan technology, which will radically reduce its acoustic visibility - this is one of the points of the military demand. Among the projected skills of the new machine is the ability for limited air combat at medium and long range missiles air-to-air missiles, which will allow it to act as a hunter on the enemy's drones.

In particular, the state-owned company Israel Aerospace Industries, which had previously created the large reconnaissance vehicles Heron and Eitan, is developing the drone. According to a source in another publication, Israel has been creating an inconspicuous drone since the mid 2000-s. IAI itself does not comment on this information, which, however, is only an indirect confirmation for those who are familiar with the Israeli “do not confirm or deny” style used in cases when it comes to items of strategic importance. According to analysts, the new machine may enter the ranks of the IDF Air Force in the near future. Of course, it’s far from the fact that it will immediately become public domain, such as the Spike NLOS rocket system, which was classified for about 20 years, or the Jericho rocket series, which are not disclosed to this day.
Ctrl Enter
Noticed oshЫbku Highlight text and press. Ctrl + Enter
We are
The action “Military service under the contract is your choice!” In Rostov-on-Don: future contract servicemen, exhibitions and “Russian Knights”Deck tactical transport aircraft C-2 Greyhound
2 comments
Information
Dear reader, to leave comments on the publication, you must to register.