December 6 2013
80
The other day, OPEC Secretary General Abdullah al-Badri gave an interview to German journalists and said that the American shale revolution will be completed in five years, or even four years. He said that up to 2018, oil production in shale in the United States is likely to increase, but then a decline will begin. As for the OPEC countries, they, on the contrary, will begin to increase production - and by the 2035 year they promise to bring it to 47 million barrels per day. Earlier in the OPEC report, it was reported that the global demand for the cartel’s oil by 2018 would drop by a million barrels per day due to increased supplies of “black gold” from Canada and the United States. 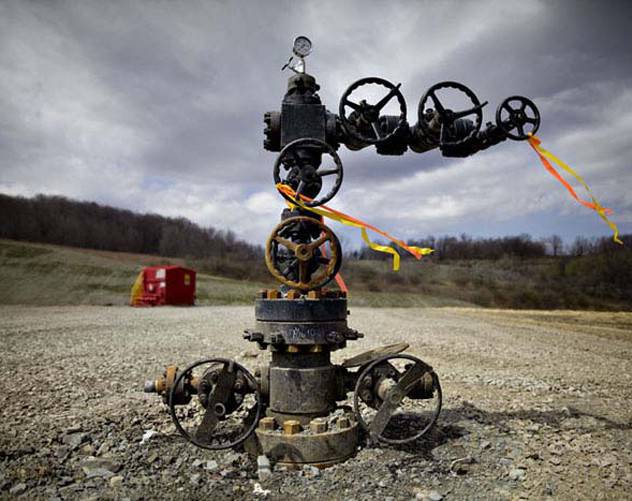 Due to the use of hydraulic fracturing, which allows to extract oil from hard-to-reach formations, only in 2013 year the volume of shale oil production in the USA and Canada is expected to jump to 3,3 million barrels per day (almost by one third).

Recently, OPEC Secretary General Abdullah al-Badri said in an interview with German journalists that the shale boom in the United States in four or five years will decline. “In many (oil) fields, production is already rapidly declining, in some cases by 60% over the course of a year,” he noted.

The prediction of the International Energy Agency (IEA) has also appeared in the media. IEA chief economist Fatih Birol said: “Expecting a rapid growth in shale oil production in the United States, the OPEC countries took a pause in their investment activity and took a wait-and-see attitude. I am truly concerned about the conclusions about the forthcoming abundance of American shale oil, and about the fact that we are giving erroneous signals to OPEC countries, since such a situation can lead to their refusal to implement investment programs. ” In addition, the expert made it clear that the IEA revised its assessment of the "American shale energy revolution." “It would be more correct to say an oil surge than a revolution,” he said.

Alexander Razuvaev, director of the analytical department of the Russian company Alpari, agrees with shale skeptics. By his wordsAmericans at the beginning "will have a maximum in terms of production, and then a landslide in terms of volumes." In the USA, technologies were tested, and it turned out that “they are not so profitable”.

Moreover, American environmentalists are sounding the alarm: drilling of rocks will lead to contamination of underground sources of drinking water. Plus, the threat of earthquakes in seismically active regions of the United States is increasing.

And recently, B. L. Weinstein published an article in The Hill entitled How to dethrone King Vladimir (How to overthrow Tsar Vladimir). Expert offered different ways to get Putin off the “throne” —in the first place, by exporting liquefied natural gas produced in shale to Europe. The gas will be followed by the oil extracted by the method of hydraulic fracturing.

Here is a brief of his theses.

In 2011, the United States overtook Russia and became the number one producer of natural gas on the planet. Thanks to shale boom, America should become the largest oil-producing power.

By exporting liquefied natural gas from the United States to Europe and Asia, Weinstein writes, the US will crush Gazprom, which reigns in these markets. In parallel with the export, shale extraction technologies should be transferred to China, Poland and other countries that have significant shale resources: this will reduce their dependence on Russian gas. At the same time, all this will give impetus to the development of the energy sector of America.

Whole enemy geostrategy. Where did so much noise around the "shale project"?

“... Currently, Ukraine is carrying out geological exploration on three hydrocarbon areas: Yuzovsky (the territory of Donetsk and Kharkiv regions), Oleskaya (the territories of Ivano-Frankivsk and Lviv regions) and Scythian (deep-water shelf in the north-western part of the Black Sea). To conduct work on the premises, companies were created in which the Ukrainian side owns 50% of shares (mainly the state-owned company Nadra Ukraine). The second half of the mining operator: Shell (Yuzovskaya Square), Chevron (Oleskaya Square), a consortium of companies led by ExxonMobil (Skifskaya Square).

About the prospects of production is difficult to judge. And the estimated gas reserves in shale and hard sandstones, and the volume of the estimated production, and the time during which these volumes will be reached, and, finally, its price - everything is extremely unsteady. Optimists like Minister Edward Stavitsky - the main lobbyist of joint projects - insist on a total level of production from three areas of the order of 30 billion cubic meters. m already after 5-7 years. At the same time, its cost will supposedly be three times lower than the actual price of Russian gas. However, before the end of exploration, forecasts can be made by anyone, even such bold ones. The main thing is to understand that they remain the skin of an undead bear. ”

Here, let's add, they also want to kill the bear.

The analyst recalls that, while Ukraine is looking for gas in shale and pretends to be its cost, Europe is getting cold to shale. The “Shale Revolution” has already been canceled in France and Bulgaria (a ban has been imposed on the use of hydraulic fracturing technology), the Czech Republic (moratorium); Hungary (where the project was closed by ExxonMobil); Sweden (“Shell” recognized the search for deposits unpromising).

To this we must add a few words about the protests over shale mining that took place recently in Romania, as well as in the UK.

In Romania, the police broke up people gathered at the place where Chevron decided to start test drilling. The protesters were “just furious that, according to them, the authorities sold them to the British Energy Corporation. At the same time, people were not told about the possible consequences and were not given any guarantees. Many locals are farmers. They are very proud of their clean air, their fruits and vegetables ", - says the correspondent "RT" Polina Boyko.

Speaking about the expansion of Western corporations to Ukraine, the columnist “However” Ivan Zatsarin points out: any economic integration is the first step towards political integration. Therefore, joint projects of the Ukrainian government with oil and gas TNCs are a vector of Kiev’s geopolitical aspirations. According to the analyst, Ukrainian elites are ready for environmental risks, ready to ignore the dangers of fracturing technology, and even agree on “predatory” production sharing agreements. The main thing for them, the author of the material considers, is to ensure the gas balance, to keep the country under control, and also to keep the export margin, even if minimal.

The Ukrainian authorities are advised to recall Lenin to the Ukrainian authorities: “We make sacrifices by giving millions of valuable materials to foreign capital ... but at the same time we should receive the benefits we need, that is, increasing the number of products and, if possible, improving the situation of our workers as employed in concession enterprises that are not engaged ”(complete collection of works, 5 ed., vol. 43, p. 190).

Meanwhile, Ukraine is turning to Russia. This is evidenced by both the non-signing of the association agreement with the EU and the recent statement by Viktor Yanukovich about Kiev’s readiness to resume the purchase of Russian gas while lowering its price. Ukrainian president stressedthat both sides suffer from the current situation: having lost the Ukrainian market, Russia also suffers losses.

However, Ukraine owed Russia a huge amount. The media write about the transfer of payments. Gazprom does not confirm this information, but does not refute it either. Earlier, this information appeared in the Russian and Ukrainian media with reference to Evgeny Bakulin, Chairman of the Board of Naftogaz of Ukraine. It was reported that the company agreed with Gazprom on the transfer of payments for gas supplies in October-December to the spring of 2014.

“As for payment, we agreed to shift payments from October, November and December to spring,” said Bakulin.

He further stressed that Naftogaz will not be able to repay the debt to Gazprom for the August gas supplies until December 7: the work of the Ukrainian government has been blocked due to mass protests about the failure of the association agreement with the EU.

And the deputy chairman of the board of Gazprom, Andrei Kruglov, recalled that Ukraine’s debt for gas already amounted to more than 1,3 billion dollars.

Western shale industrialists, who decide to run their shale projects on foreign territory and do not forget to get tax breaks, play on the weak solvency of Ukraine. The geopolitical vector, which Kiev will adhere to in the near future, largely depends on the outcome of the negotiations, which are conducted by Russia and Ukraine on the gas line, and on Ukraine’s debt settlement. After all, the “overthrow” of Putin, about which Mr. Weinstein wrote, can begin with the destruction of allied Ukraine. And for this there are two ways at the same time: continue to turn Kiev to the West and turn the country into an environmental garbage dump. The western bourgeoisie is quite capable of such a dirty deed: even Thomas Dunning, quoted by Marx, wrote:

“... Capital is afraid of no profit or too little profit, as nature is afraid of emptiness. But once sufficient profit is available, capital becomes bold. Provide 10 percent, and the capital agrees to any use, with 20 percent it becomes lively, with 50 percent positively ready to break its head, with 100 percent it tramples all human laws, with 300 percent there is no crime for which he would not risk, at least under the gallows fear. If noise and abuse bring profit, capital will contribute to both. "

In the 21st century, “noise and swearing” just make a profit: after all, the hype raised around the so-called shale revolution is not only a blow to the allied relations of Ukraine and Russia, but also an attempt by the US to establish itself again in world hegemony and even to overthrow Putin . The aggravation of the gas issue between Kiev and Moscow is partly the goal of the very anti-union geopolitical project associated with shale hysteria, which is aimed at strengthening the West and weakening the Kremlin.

Observed and commented on Oleg Chuvakin
- especially for topwar.ru
Ctrl Enter
Noticed oshЫbku Highlight text and press. Ctrl + Enter
We are
Results of the week. “Why is the war going on? Do they not read newspapers? ”"Shale Revolution": saboteurs, crazy and contused maniacs according to Mikhail Leontyev
80 comments
Information
Dear reader, to leave comments on the publication, you must to register.