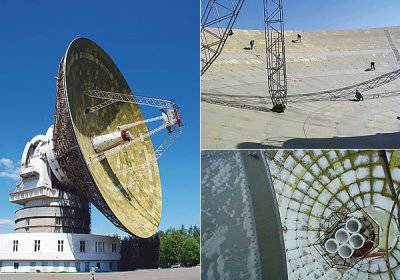 In scientific publications, and even in tenders for public procurement, radio-thermal locators are mentioned many times. Their purpose is to receive radio-thermal radiation signals in the millimeter-wave range. The main difference between the radiolocation and active radars is the absence of a transmitter: the radiolocator receives the natural radiothermal radiation of the objects of observation. This circumstance has a significant impact on the achievable performance characteristics in the case of the use of a radiotlocator as part of the ship radio navigation system.


At the same time, the radiocarrier must be distinguished from infrared devices, for example, heat finders - optical devices operating in the infrared range. The working tool of the radioflocar is a radiometer or radiointerfometer. In principle, a radiotlocator can produce a picture similar to that of a television. Radio radiolocators work in the millimeter or centimeter range. To amplify the received signal, a noise generator is now used - this is not a guided beam of a classical radar, but simply a causative agent of thermal radiation from objects.

Publications on them - the mass. An example of the use of radiolocation is the radiometric complex “Icarus-Delta” designed to measure the amplitude and spatial distribution of the intrinsic radiothermal radiation of the earth's surface in the microwave range in order to determine the following characteristics of the atmosphere, ocean and land: the position and variability of the main frontal zones of the North Atlantic: current zones of the system Gulf Stream, the North Atlantic Current, jet streams of the tropical Atlantic Ocean; the position, intensity, and direction of movement of large-scale temperature anomalies localized in the upper layers of the ocean; snow and ice cover parameters; water storage of clouds and integral parameters of the atmosphere; borders of precipitation zones; drive wind speed; air temperature distribution.

The possibility of creating systems similar to PCL technology exists based on the use of ultra-long coherent accumulation of signals, spectral analysis methods and applied fractal theory and deterministic chaos.

Radiometric complex "Delta-2D" is designed for installation on the satellite "Ocean". It operates on four frequency channels: 36; 22,3; 13,0; 8,2 GHz. In each frequency channel, reception is conducted in two orthogonal polarizations. Radiometric receivers of the 13,0 and 8,2GHz ranges are made according to the direct gain receiver circuit, and the rest are superheterodyne.

The equipment "Delta-2D" used many technical solutions that have taken place in the equipment "Delta-2P" and have proven themselves in real flight conditions. An 8,2GHz band irradiator is added with an additional noise signal from the internal reference oscillator.

As a result of the measures taken, it was possible to ensure the maximum accuracy characteristics of the radiometric system, to achieve high stability of the radiometric complex, while increasing the absolute accuracy of determining the noise temperature to values ​​<0,4K in the entire range of measured temperatures. In conclusion, it should be noted that a characteristic feature of the developed onboard radiometric systems is the onboard calibration system. Unlike most of the existing scanning radiometers in Delta systems, calibration by a “cold space” signal is performed using all elements of the antenna system, including the main reflector mirror, which significantly increases the measurement accuracy.

At present, the development of a new generation of space-based radiometric systems is being completed, differing from the above-mentioned increased sensitivity and extended frequency range up to 150GHz.

In studies of IRE RAS, energy ratios were estimated during the formation of contrasts from weakly reflecting objects made using the STEALTH technology. It was shown that optimal detection possibilities exist in the transparency windows of the millimeter wave range, namely at 8,6 wavelengths; 3,3; 2,2 mm. Detection range depends on weather conditions and observation geometry. When observing high-flying objects and using a three-millimeter aperture (λ = 3,3 mm), their detection is possible in a clean atmosphere at a distance of 10 ... 15 km with a signal-to-noise ratio 14 dB. Based on numerical calculations, the real possibility of detecting subtle air objects in the atmospheric surface layer against the sky, the earth and the sea surface at a distance of 20 ... 25 km and at frequencies 94 and 136 GHz is shown. In space, this range can be 200 ... 300 km.

Promising from the point of view of the detection of stealth aircraft are works on the creation and improvement of passive radiometric detection of flying objects with a high degree of anti-radar protection. According to Kirchhoff's law, an increase in the degree of their anti-radar protection increases the intensity of their own radiothermal radiation into the surrounding space.

That is why in 1998 ... 1999. In the United States, a fundamentally new passive location system was developed, based on the Passive Coherent Location-PCL technology, which was officially called the Silent Sentry System. PCL technology allows to obtain three-dimensional coordinates of the trajectories of air targets (low-profile - “STEALTH” and low-flying) based on the assessment of changes in the signal environment, formed as a result of the operation of conventional means of radio and television broadcasting. Preliminary evaluations of test results have shown that it can be effectively used even in missile attack warning systems. Based on similar principles based new radar in China. This radar can reliably detect and accompany such inconspicuous aircraft as the F-117, F-22.

A very important “trick” of a radio-heat-breaker is the ability to detect submarines along their wake trail: warm water, heated by submarine screws, rises to the surface. The sensitivity of the radiofrequency comes to the Kelvin 0,05 degree. Therefore, this trail can be detected through 5-6 hours after the passage of the submarine. If these devices are widely used, then the submarines would come to an end: WIG, static hovercraft, patrol airships, airplanes and helicopters would track the wakeboard along the wake. And the rest is a matter of technology: hydrobuys, lowered antennas, torpedoes and depth bombs. The submarines cannot fight with this technique at all: when surfacing, the radio-thermal locator will immediately fix the submarine, which can be sunk even from a grenade launcher.

Based on the acceptable mass and dimensions, this complex, installed on the Mir orbital space station, can be easily converted to search for submarines and their wake with airships, airplanes and ekranoplans.

And here the question arises: why this technique does not find neither wide application, nor large-scale investments? After all, it is radio-thermal location, coupled with the successful revival of airships and ekranoplans (successful tests of the 24-local “Burevestnik-24” E-gun) in the Republic of Sakha - Yakutia, the large-scale works of ZAO NPK “TREK” on the design and construction of Ekolga-VE: EK-12 EK: 17, EK-40, carried out with the organizational and financial support of Chinese firms, the creation of a commercially acceptable 50-local German-South Korean ekranoplan WSH-500, the adoption of the armed forces of the Iranian Navy of two squadrons of ekranoplans "Bavar-XNU MX ”, etc.) make it quite possible to create a low-budget all-weather, independent of the state of the surface of the sea, the flight weather of the anti-submarine complex, completely invulnerable to the means of detection and destruction available to submarines.