New Office to counter the embezzlement, or Bad against corruption


From now on, the anti-corruption department will work as part of the presidential administration. The main functions of the new control are the following:

p.9. Taking measures to prevent corruption and other offenses;

p.10. Ensuring that employees of the Presidential Administration of the Russian Federation comply with the restrictions and prohibitions, the requirements to prevent or resolve conflicts of interest, their fulfillment of the duties established by Federal Law 25 of December 2008 No. 273-ФЗ “On Combating Corruption” and other federal laws;
p.11. Taking measures to identify and eliminate the causes and conditions that contribute to the emergence of a conflict of interest in the public service in the Administration of the President of the Russian Federation;

p.16. Implementation of the test in the prescribed manner:

the accuracy and completeness of information about income, expenses, property and property obligations represented by persons holding positions, the exercise of powers under which entails the obligation to submit such information, or citizens applying for these positions;

compliance by state officials and persons holding positions, stipulated by paragraph 1, part 1, article 71 of the Federal Law of December 25 2008 No. 273-FZ “On Combating Corruption”, prohibitions and restrictions established for them, as well as their duties in accordance with the law on anti-corruption;

the observance by citizens who have replaced the posts of the federal state civil service in the Presidential Administration of the Russian Federation established for them by the legislation of the Russian Federation of restrictions in the event that they conclude an employment contract after dismissal from the federal state civil service. 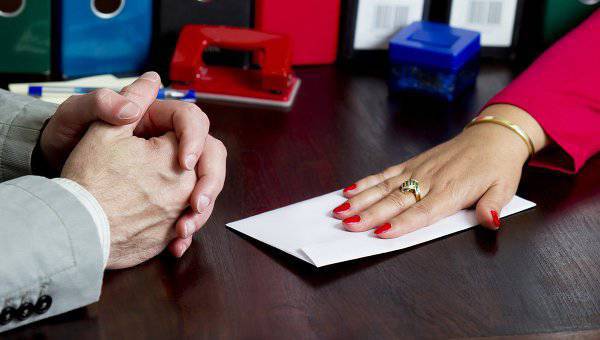 December 3 President 2013 signs the decree with the number 879, according to which Oleg Anatolyevich Bad is appointed head of the new department (Bad - in this case, the official’s last name). It is worth paying attention to the personality of Oleg the Bad.

Oleg Bad was born December 4 1968, in the city of Kiev, and therefore we can assume that his appointment is a random or non-random gift to the 45 anniversary from the president. He has a higher education - a diploma of graduation from the Higher School of the KGB of the USSR. After serving in the ranks of the Soviet army, Oleg Plohoy served for almost 12 years in state security agencies (first the USSR - from 1988 to 1991, then the Russian Federation - 1991 to 1999). More than 13 years of Bad works in the presidential administration. The last direction of his work before the inauguration of the head of the anti-corruption department was the presidential administration for civil service and personnel in the position of deputy head. Oleg Plokhoy holds a degree in law and is an Honored Lawyer of the Russian Federation.

After the appointment of Oleg Plokh, the head of the presidential administration, Sergei Ivanov, noted that the anti-corruption department will not become a new law enforcement agency and will not fight corruption across the country. The main direction of the administration’s work, according to the same Sergey Ivanov, is to check the declarations of the officials (the Kremlin). Judging by the anti-corruption control functions presented above, indeed, Oleg Plokhoy and his subordinates will be focused strictly on identifying embezzlers in the ranks of the Kremlin administration itself.

Starting, of course, more than good - it's time to aim, but only the feeling of a strange thing still does not leave. The strangeness (I would like to hope that this is just worthless author's arguments that have nothing to do with objective reality) manifests itself in the following: in order to counteract possible criminal manifestations in a fairly limited community, a special unit is allocated in the same community. Moreover, the head of this department is not a new person at all, but, as they say, the administrative old-timer - almost 14 years in the presidential administration. During this time, any Russian official in his place has time to eat a dog, but not one.

And by and large, it is difficult to imagine that the new administration with “its own board” people could effectively counteract corruption in the camp of their own colleagues. This is not our way. Well, our person is not used to (especially the one endowed with bureaucratic rank) to be afraid of such a check when they say: you do a better report there, or else Vasya from the neighboring department will come (with which you are at school at the same desk, and at the institute, and at work for a dozen years shoulder to shoulder) and hoo how will check you! Even if the hypothetical “Vasya” comes with a check, then you can talk with him about the school, the weather, and everything in the world ...

It begs something that sort of:

- Well, how is your declaration, Petya?
“You hurt me, Vasya ... It's all right, Vasya!”
- So we note: Petya with the declaration is also all right! Like a wife, like children?
- Thank you, Vasya! They are all right too!
- So that's great! His people - is considered, Petya.

No no and one more time no! It is necessary to subject these unreasonable arguments to obstruction, since in the new administration the work will be built completely differently. The new manager will closely examine the declarations filed by his colleagues, peer into each ruble spent and identify any inconsistencies found. After revealing the facts of corruption, opposition begins. (By the way, what an interesting word: not even a struggle, but more gently and sincerely - opposition). Further, of course, - the prosecutor's office, the investigation, the court, Siberia ...

PS A new anti-corruption administration in the presidential administration appeared immediately after the publication of the results of a study of the level of corruption of political elites around the world, conducted by Transparency International. How objectively the situation with corruption was investigated by this international non-governmental organization is already a separate issue, but according to its rating Russia is in the “127 place” by “the level of perception of corruption” (this is 6 points higher than last year). Russia's neighbors for this rating are Azerbaijan, Lebanon, the Gambia, Pakistan and Madagascar. In the first three (least corrupt), according to experts of Transparency International, such countries as Denmark, New Zealand and Finland. Uzbekistan and Turkmenistan are among the most corrupt states.

Ctrl Enter
Noticed oshЫbku Highlight text and press. Ctrl + Enter
We are
Situational analysis of the death of the MH17 flight (Malaysian Boeing 777), made on the basis of engineering analysis from 15.08.2014Military doctrine of the Russian Federation
127 comments
Information
Dear reader, to leave comments on the publication, you must to register.