The return of the militants and European fears

December 9 2013
20
Thomas Hegghammer (a political analyst at the Norwegian Defense Research Establishment) recently published in the Washington Post blog The article titled “The number of foreign European militants fighting in Syria is historically unprecedented. Who should be bothered? ”The author answered the question posed: Denmark, Norway, Belgium and Austria will have to be very serious. France, Germany and Britain, too, will not find it. 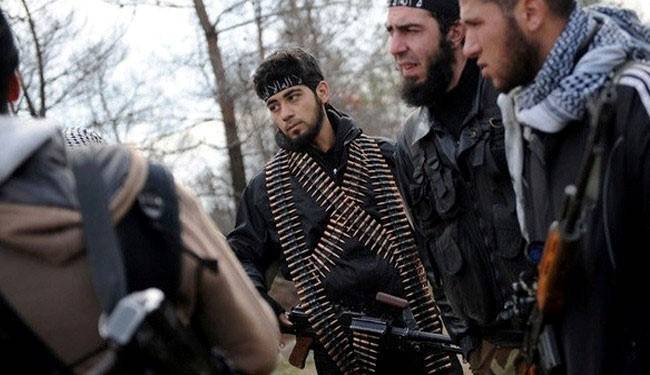 The question of the return of militants to Europe is extremely worried about the author of the material. After all, radical Islamists who have fought in Syria can address their attacks to the West. European governments will have to seriously think about countermeasures.

However, even assessing the terrorist threat posed by foreign fighters is a difficult task. Yes, the chances that foreign fighters will join the ranks of international terrorists are much higher than the participation in terrorism of someone from the Muslim population who does not have war experience. On the other hand, only a small part of the militants, as a rule, return "home" to make attacks there.

A necessary condition for assessing the threat is determining the number of fighters who went abroad. How to do it? The author believes that it is necessary to analyze all public information about the number of foreign fighters - from reports of the death of individual individuals to estimates of the United Nations. The author clarifies that he and Aaron Zelin have made such estimates in the last 15 months. The information kit allowed researchers to compile a “collection” from more than 800 sources. However, this approach is not ideal for assessments at country levels, since the “collection” includes diverse types of observations.

There is another evaluation strategy. It is simpler and more reliable, although it has limitations in scope. This approach is to use information that comes with specific types of observation, namely, the analysis of assessments provided by the special services of individual countries.

Periodically, government officials publicize or mention such assessments (unclassified reports, interviews with journalists, parliamentary hearings). Yes, these estimates may differ in their accuracy and source of production. However, they are likely to be the best estimates of all available, because the intelligence services have a much wider range of data collection tools at their disposal than scientists can afford.

The author brought the country estimates, which allow to get an idea of ​​the scale and distribution of militants from Europe, in a table. Sources of information were the data of European intelligence services for the last 6-7 months for twelve countries. (If there are minimum and maximum ratings, the latter is given in brackets).

The number of Muslim foreign fighters in Syria by individual countries of origin, according to intelligence estimates of each country in 2013 year: 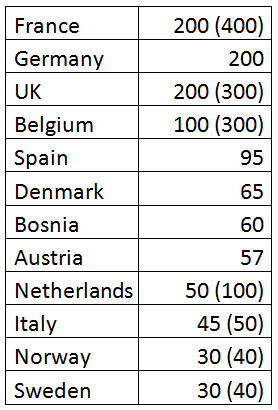 In addition, the 12 of these countries are probably only the main suppliers of foreign fighters to Syria. There is enough evidence that people from other European countries are fighting in Syria.

Thus, it is possible to assert with a high degree of confidence that since the beginning of the war at least 1200 European Muslims went to Syria. As a result, the researcher points out, we are talking about the largest in modern stories the European Muslim contingent of foreign fighters involved in any conflicts. Indeed, the number of European fighters in Syria may exceed the total number of Muslim foreign fighters from all Western countries in all conflicts between 1990 and 2010 years (estimated to be just under a thousand). And this is only two and a half years of the Syrian war.

A comparison of absolute numbers shows that four countries - namely, France, Germany, Great Britain and Belgium - have especially large “contingents” of militants who went to Syria. However, absolute numbers are not necessarily the best indicators of the scale of the threat: after all, large countries have more resources to solve the problem. Ten potential terrorists are a big problem for Luxembourg than for the USA. Comparison of the population of the country and the estimated number of foreign fighters per million inhabitants allowed the author to compile another table.

The estimated number of Muslim foreign fighters in Syria per million inhabitants in the country of origin: 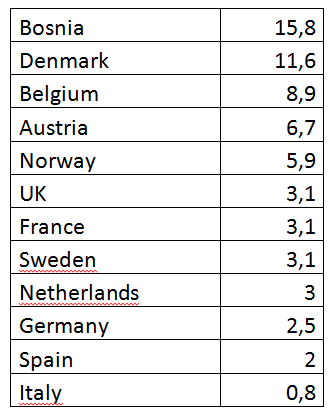 Next, the scientist analyzed the total number of Muslims in specific European countries. For example, he notes, the United Kingdom and France have the same population, but in France the Muslim population is almost 65% more than in the UK.

Thomas Hegghammer distributed the twelve countries in question according to the number of foreign fighters per million Muslims and summarized the data in the following table.

Estimation of the number of Muslim foreign fighters in Syria per million Muslims in the country of origin: 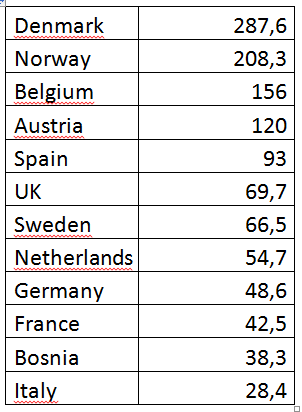 The scientist advises to take these figures with reservations, since the general level of radicalization should be taken into account. Not all foreign militants are radical Muslims, he points out, and not all Muslim radicals are ready to fight abroad. There are also limiting factors: it is easier to go to Syria from some countries than from others. Nevertheless, the political scientist believes that politicians in Copenhagen, Oslo, Brussels and Vienna need to take note of these data. The researcher also notes that the greatest "contingents" of the militants probably went from France, Germany and the UK to Syria.

Hegghammer concludes: the number of European foreign fighters in Syria is historically unprecedented and alarming.

The article by Mr. Hegghammer on the Washington Post blog was actively commented. Some reader reviews are of interest. We give them.

“Foreign militants” are countless invisible Muslims all over the world who believe Islamic theologians to violence.
If the Islamic Reformation does not happen, Islam will continue to train (literally) millions of these “foreign fighters”, and the world will be governed by their scenario ...

Redant
The most interesting aspect of these data has gone unnoticed: the numbers in absolute terms are very small compared to the 1,6 billion of Muslims in the world (or something like that).
Deploying huge armies against such small numbers is an incredibly expensive strategy.

cuckatoo
Well, this is what Europe gets for indiscriminate immigration. The radicalization of Muslims was inevitable as soon as the economy turned south, and now the Europeans will face a pair of jihadist battalions ready to wreak havoc.
Time to sober up!

oblivionville
Personally, I would like to see how all the neocons, the instigators of war in this country, would get the same ...


vankaas
Thank you for these interesting tables. But “European foreign fighters” may well turn out to be non-European individuals and have many nationalities. Do you have several tables with the origin of the militants? How many Somalis, Moroccans, etc.?

Observed and translated by Oleg Chuvakin
- especially for topwar.ru
Ctrl Enter
Noticed oshЫbku Highlight text and press. Ctrl + Enter
We are
Migrants go north. The specifics of the migration situation in ScandinaviaBearded hirelings
20 comments
Information
Dear reader, to leave comments on the publication, you must to register.