Lawyers for kidnappers and murderers 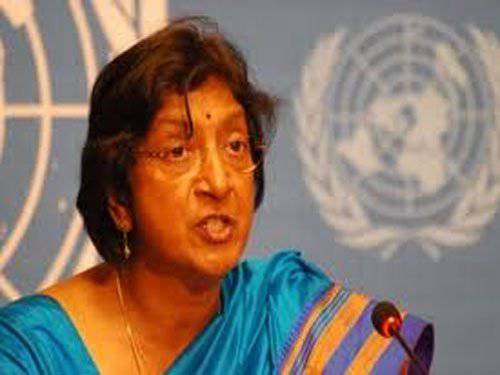 It so happened at the "world community" - if a state pursues an independent policy - this is a reason to accuse its leadership of all sins. Previously, more weighty reasons were needed for this, today it is enough just to refuse to sign an unprofitable agreement - and the Maidan program will be used for the crackdown, for which they are accused of “dictatorship”. Well, for a long confrontation with the plans of the colonialists - accusations will follow more abruptly - of war crimes.

The Associated Press news agency quotes the words of UN High Commissioner for Human Rights Navi Pillay that the UN allegedly has substantial evidence that high-ranking members of the Syrian government, including the head of state, are responsible for the war crimes. " one evidence and added that specific names would be called only “at the request of the international community.” However, it is the head of the Syrian state who is accused, and this is enough , once again to make a conclusion about the mood of the lady, broadcasting on behalf of this very international community, but you can safely write her name as Navi Pilie (LIE - in English is a lie).

Madame Lie does not want to notice the terrible crimes of those with whom the Syrian government is compelled to fight. In the meantime, terrorist groups committed a cynical crime against a Christian shrine - the Monastery of St. Thecla in the city of Maalula.

In early September, this city was already a victim of militants. Then they destroyed and burned the houses of many citizens, beheaded 30 Christians, fired at the monastery of St. Thecla, but still did not dare to touch his novices. Soon the town was liberated by the Syrian army.

Now the servicemen liberated the town of En-Nebec, which the militants occupied, and the retreating gangs once again occupied the long-suffering Maalula. This time, the brutalized terrorists already had a hand on defenseless women - the abbess of the Monastery of St. Thecla Pelagia Sayyaf and 12 nuns were abducted. According to the Syrian Christian communities, they are now in the city of Yabrud occupied by bandits. Earlier, representatives of the so-called “opposition” denounced Mother Pelageya with the blackest words for telling the truth in an interview to journalists that the demonstrations in Syria from the very beginning of the crisis were not at all peaceful - their participants committed pogroms and killed policemen. This is the truth that the militants and especially their patrons abroad reject.

Islamist "oppositionists" are committing crimes not only against Christian, but also against Muslim religious figures. They made an attempt on the imam of the Al-Kabir mosque of Sheikh Hussein Al-Qaderi. As a result, he was injured and hospitalized.

Sheikh was visited in the hospital by the Minister of Waqfs Muhammad Abdel-Sattar Al-Seid. He stated that crimes against religious leaders and ordinary citizens, as well as against churches and mosques, testify to the dark thinking of terrorists and that they have nothing to do with religion or human rights.

December 3 in the area of ​​Jisr-Abyad ("White Bridge) - where there is always very crowded, where the market and many small shops - is a blast. The terrorist set off a "death belt". In addition to the criminal himself, 4 people died, dozens were injured.

The Ministry of Foreign Affairs of Syria in connection with these crimes sent a letter to the UN, in which it called to condemn the barbaric actions of extremist gangs. “We also call on the international community to fulfill their obligations and put pressure on the countries supporting these groups to stop financing and arming them,” the message said. In addition, the Foreign Ministry indicated that the UN’s inability to stop the activities of terrorists puts under doubt its effectiveness and sincerity.

The Russian Foreign Ministry also made a statement about the atrocities committed by the Syrian "opposition". In particular, it says: "Out of the bloody conflict in Syria, there are more and more reports that indicate that extremist armed groups have largely subordinated their activities to the task of inciting ethnic and inter-religious hatred."

In addition to the terrorist attacks on the Umayyad Mosque in the center of Damascus, which is a cultural monument listed by UNESCO, the abduction of the nuns of the monastery of St. Thecla and the assassination of Sheikh Al-Kaderi, the Russian Foreign Ministry pointed out that "According to incoming information, the excesses of extremists and bandits continue in the provincial center of Racca. Outrage is caused by the facts of desecration of temples, attempts to erase traces of the Christian presence. So far, the fate of Aleppo, the Catholic priest P. Dal Oio, captured by militants of the Orthodox and Syrian-Jacobist metropolitans of Aleppo, is unknown.

“We consider it necessary to once again draw the attention of international and regional partners to assist the settlement in Syria, the leadership of international humanitarian organizations to the above aspects of the situation in this country. Aggressive criminal actions of terrorists against religious buildings, religious leaders should be stopped. This is also important from the point of view of forming the proper atmosphere for convening the International Conference on Syria in Geneva 22 in January 2014, ”summed up in Smolensk Square.

Russian aid is not limited to words. The Emergencies Ministry plane arrived at Latakia airport, on board of which - 25 tons of humanitarian aid.
So far, the Russian people, with what they can, help the Syrian, - officials like Navi Pillay are engaged in overt politicking. Not wanting to see the obvious, they equate the fight against terrorism with “war crimes”, thereby giving the bandits a signal that they can do anything.

Ctrl Enter
Noticed oshЫbku Highlight text and press. Ctrl + Enter
We are
Situational analysis of the death of the MH17 flight (Malaysian Boeing 777), made on the basis of engineering analysis from 15.08.2014Terrorists kill, UN counts
43 comments
Information
Dear reader, to leave comments on the publication, you must to register.