December 5 2013
13
In 1997, the Austrian company Glock released another version of its pistol — the subcompact Glock 30, which is designed to use the popular in the US 11,43-mm pistol cartridge, designated as .45 ACP. The bullet of such a cartridge has a strong stopping power. The number of cartridges in the store (10), it is also adapted to the US market. With this gun, the company "Glock" hoped to consolidate its position in the US market. Despite the rather large caliber, the Glock-30 gives the impression of a small, compact weaponsfirst of all it is intended for secretive wearing under clothes.


In terms of its design, the Glock 30 subcompact (small-sized) pistol is a modification of the basic Glock 17 model, which was adapted to the American .45 ACP cartridge. Unlike the Glock 17, changes were made to its design aimed at reducing the size: the casing-bolt, the barrel, and the handle were significantly shortened. The front and rear edges of the cover-cushion were rounded so that the contours of the pistol would not stand out during hidden wear.

In addition to the base model "Glock-30", a variant of the Glock 30SF (Short Frame) was developed, which was distinguished by the presence of a narrower handle, which was obtained by shifting the back of the handle forward. This version was created specifically for ease of use by arrows that have a small hand. Due to the use of the .45 ACP large-caliber cartridge on the Glock-30 pistol, the handle was significantly increased. 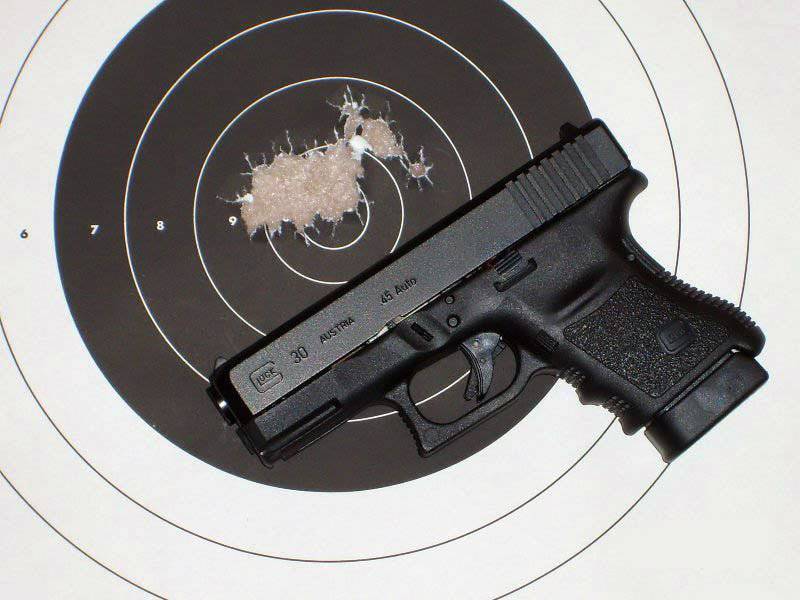 Automatic pistol, as in previous models of the company (with the exception of the .380 Auto caliber), operates by recoil barrel with a short stroke. The barrel is locked by the entry of the upper lip of the barrel into the housing-gate window. Unlocking is performed when lowering the breech breech down with the help of the lower tide of the breech and the axis during recoil of the barrel. The pistol casing, which is U-shaped, is made of steel using a high-precision casting method and is subjected to a special treatment procedure to increase its corrosion and wear resistance. The shutter casing and the barrel of the gun are treated with a special coating "Tennifer". Such surface treatment of parts to a depth of 0,05 mm allows you to achieve strength at the level of 69 Rockwell units (for example, the hardness of technical diamonds 71-72 Rockwell units).

The Glock Pistol has a unique “Safe Action” trigger mechanism that has an 3 automatic fuse, one of which is on the trigger. A feature of this mechanism is that in the process of reloading weapons, the drummer is cocked only partially, while it is blocked by an automatic fuse. Refilling of the firing pin is made only by pressing the trigger, while the firing pin is blocked until the trigger is fully squeezed out. Due to this, it is possible to achieve a monotonous effort (standard pull force - 2,5 kg) on ​​the trigger from the first to the last shot, which, in turn, has a positive effect on the accuracy of shooting.

A feature of the design of all Glock pistols is the lack of a trigger and a safety catch. Most of the gun is made of high-strength thermoplastic (able to withstand temperatures up to 200 degrees C). Thanks to this fact, it is light and extremely durable. In the gun, the principle of "snatched and shoot" is implemented, the weapon does not have a fuse in the classic form, but the shot will not happen until you completely squeeze the trigger of the "safe action". Structurally, the gun consists of 33 parts. A professional can make it out in seconds. 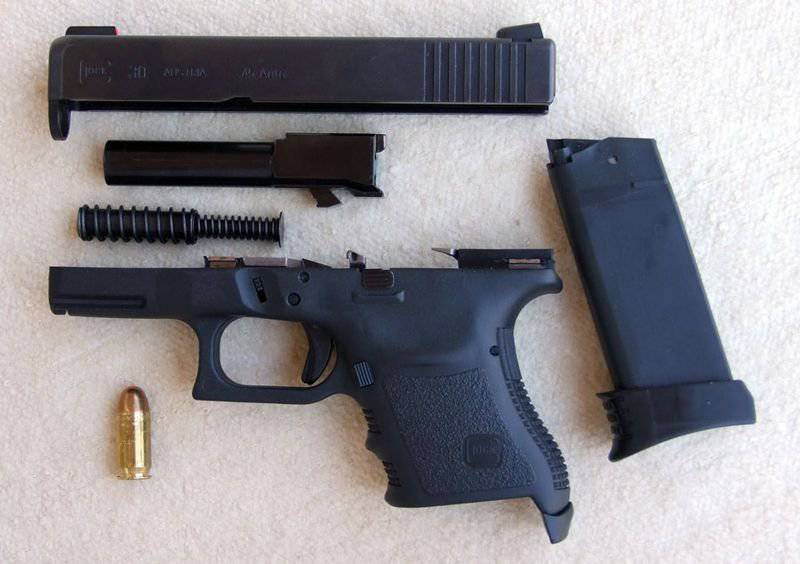 The gun has open-type sights that are located on the flat upper surface of the housing-bolt. They include a fly with a sight. Regularly the front sight of the pistol is equipped with a luminous point, and the rectangular sight of the sight is also framed with a luminous frame. The Glock 30 pistol is powered by short box-shaped detachable magazines for 10 cartridges, which are located in them in the 2 series in a staggered manner. In addition, it is optionally possible to use magazines on 9 or 13 cartridges.

The handle, the frame of the gun and the trigger guard are made of high-strength polymer material. The guide frames, along which the movement of the steel cage is done, are specially reinforced with steel inserts. Pistol grip "Glok-30" is quite short, it gives emphasis only for two fingers. To compensate for this, the handle is equipped with side and front notches for the fingers. Under the barrel of the gun can be placed guide rails that are used to attach a variety of accessories (tactical flashlight, laser designator, etc.).

It is worth noting that the Glock 17 pistol (any Glock is its closest relative) from the beginning of the 1980's remains one of the most amazing pistols in the world. Before this model, the Austrian company Glock GmbH was known to very few outside the country, only a narrow group of experts on European army ammunition heard about it. Before the Glock 17, the company never produced not only pistols, but even weapons, and today it is one of the leading manufacturers of firearms in the world. 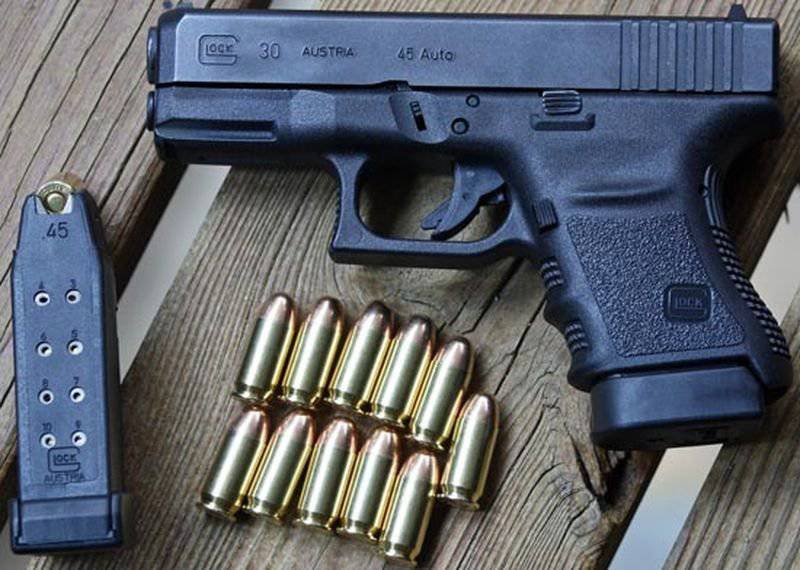 The Glock was the first pistol in the world to use plastic on such a large scale. All metal parts - the upper casing, the return spring, the barrel, while the design uses numerous inserts in plastic, made to strengthen the structure. All other parts: frame, parts of mechanisms, handle - high-strength heat-resistant plastic. The pistol managed to win the tender for the supply of the Austrian army with an army pistol, which was announced in 1980. He managed to win the competition of such bison of the industry as the German Heckler & Koch, the Belgian Fabrique Nationale, the Italian Beretta and the Swiss Sig Sauer.

The main features of the Austrian pistols of the Glock series include the low cost of production due to the very simple design of both the pistol as a whole and its individual components. As usual, the most difficult and time-consuming detail in the design of any gun - the frame - here presents no problems in manufacturing, as it is produced by molding from thermoplastic plastic without performing subsequent mechanical processing. The cost of production of such pistols in 3 times lower than the "Parabellum" or "Beretta". Also, the gun does not have an external forcibly switched fuse, which is quite convenient. In this regard, it is similar to a revolver. In order to make a shot, it is enough to send a cartridge into the barrel and press the trigger. In this case, the implemented safety system is such that it is safe to carry a pistol with a cartridge in the chamber.

The Glock 30 gun is quickly and easily disassembled and assembled, making it easier to care for the model. Its steel parts are coated with a special anti-friction coating, which, when interacting with plastic parts, practically does not require the use of a lubricant. Unlike other pistols, Glock needs only a few drops of lubricant to function properly. According to the manufacturer, the Glock 30 pistol warranty survivability is 10 000 shots, the practical survivability is even higher. 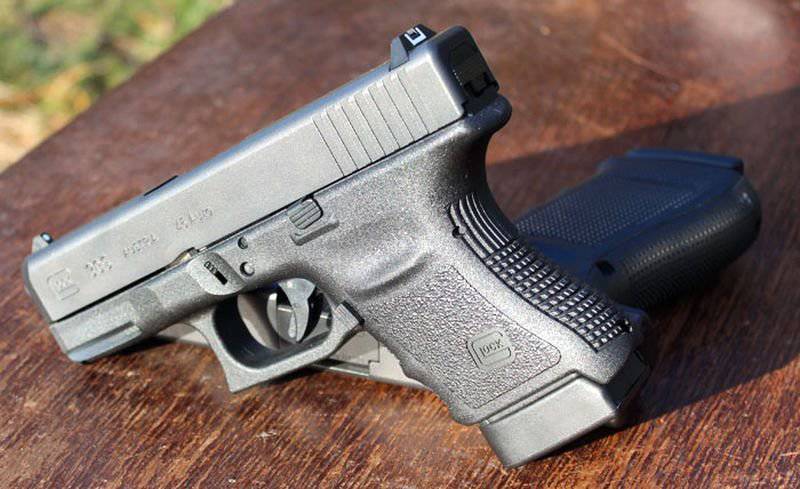 The complexity of manufacturing one gun is small. The entire production process takes 35 minutes, of which 15 minutes are spent on the fully milled shutter, 7 minutes are needed to produce the barrel, 7 minutes are spent on the frame, which is produced in a single mold. By 1999, the Austrian company produced more than 2 million of its pistols of various modifications. Currently, the gun is in service in more than 30 countries around the world, widely distributed in more than 100 countries.

The Glock 30 subcompact pistol is ready for immediate out-of-the-box shooting with the ammunition of the owner of the weapon. It combines such qualities as light weight, compact size, the absence of significantly protruding parts, reliable operation, high stopping power of the bullet used, convenience, simplicity of design and safety. All this in combination with sufficient firepower and firing accuracy for such a compact model makes this gun very popular. It is thanks to the combination of all these qualities of the Glock-30, which are very important for a subcompact pistol, to become a very popular model of a concealed pistol, not only among civilians, but also members of the special services.