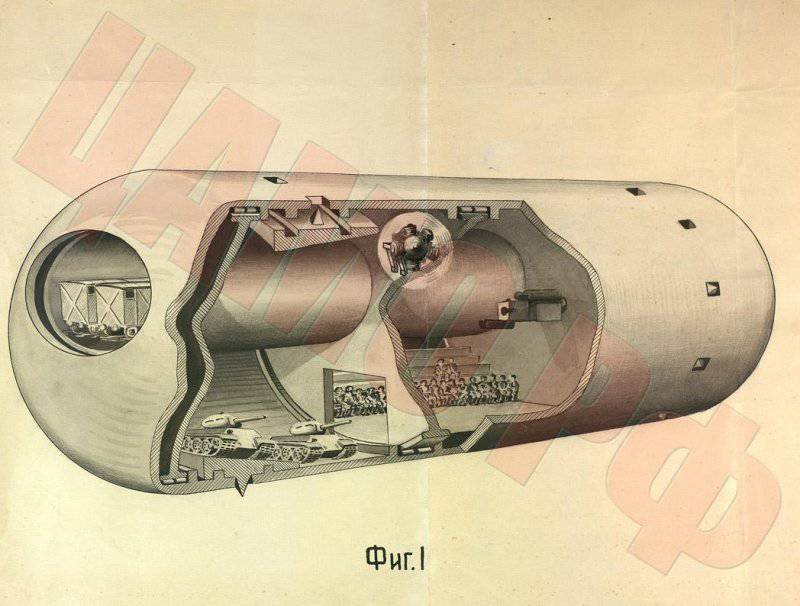 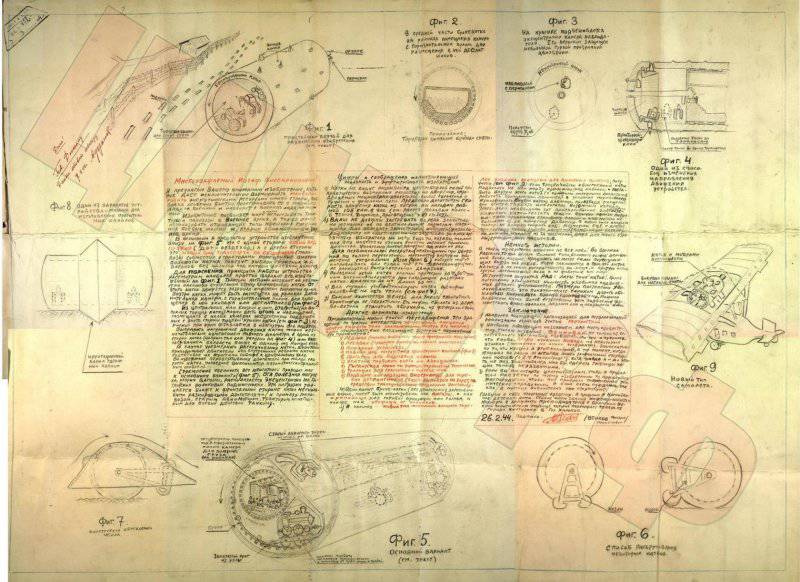 I bring to your attention an invention that gives an exceptional opportunity to maneuver the energy resources of our country, allowing it to be quickly rebuilt from a peaceful to a military one and vice versa from a military to a peaceful one.

The invention allows wider use of tractors and locomotives in wartime, as well as the better use of the obsolete types of some tracked combat vehicles and old cars in peacetime.

Basically, I suggest the device shown below (Fig. 5). This is, on the one hand, a new species. weapons (Dot-all-terrain vehicle), and on the other hand, a new type of off-road transport (a locomotive, together with tractors, placed inside a large skating rink, will carry a train loaded with railway cars without a railway under the skating rink).

To clarify the principle of operation of the device, we consider the most simple version of it, shown in FIG. 1. Tractors constantly bump on the ribbed sloping inner wall of an armored ice rink. From this, the rink moves, destroying the enemy’s engineering structures. Inside the rink, an additional chamber with a horizontal floor can be placed on the rollers to accommodate the crew or paratroopers in it (see Fig. 2).

From the central or close to the holes (on the convex ends of the rink) you can fire and observe, placing in small chambers eccentrically suspended from the inside of the end cover of the rink (see fig.3). The periscope is inserted into the curved axis of the suspension. The direction of movement of the roller can be straightened by a slight change in the working diameter on one side of the roller (for example, as indicated in Fig. 4) by throwing the ballast closer to one of the shaft ends. In the event of an excessive unwinding of the roller, the drivers raise the engines, pulling them over the inner ribs of the roller closer to the central shaft. In order to avoid overturning of the engines at a low speed of the roller, the latter are switched off automatically (by a liquid level).

The desire to increase the weight of the engines leads us to the main option (Fig. 5). All payloads, such as wagons, are eccentrically mounted on gigantic roller bearings. This load is pushed closer to the front of the rink by several heterogeneous engines (for example: a steam locomotive, an old aircraft engine, a tractor or unsuitable for military operations a tank).

Figures and considerations illustrating the reality and effectiveness of the invention:

a) the rollers will not be torn by centrifugal force at practically possible speeds of their movement, determined by the engine power, traction force and track slopes. We find the maximum allowable speed of the roller from cast iron equal to 108 km per hour (see the calculation of flywheels in the technical encyclopedia "Enlightenment", vol. VI, p. 309);

b) the shafts should not be stuck in pits that are much smaller in vertical dimensions. The rolling shaft has considerable inertia (manpower), so it will tend to cling to the edge of the obstacle, climb it, be it at least a wall inclined towards it and having a height less than half the diameter. It is desirable to generally move at an angle to the pit. For pre-spinning (necessary when driving on very rough terrain), it is possible to use a special goat (Fig. 6), which can accompany the shaft from the back during its subsequent (after spinning) forward movement;

c) the net volume of the roller, equal to approximately 30-60-ton cars, is obtained with the following roller sizes: diameter - 30 m, length - 60 m;

d) For better workability of the roller it is possible to put a cover on it (see fig. 7);

e) a large amount of iron for such a land armadillo is not necessary. It can be made of wood, strapped hoops of iron or steel.

Other variants of the invention.

The proposed new method of moving “bodies of revolution” in a straight line by means of the immutable displacement of the center of gravity of the body by the prisoners inside its mechanisms opens the following possible uses for its use:
1) Icebreaker.
2) Lesoval (treading glades on flat areas).
3) Fire device.
4) Machine for the construction of irrigation canals (Fig. 8).
5) Engine for raising targeted.
6) Ukatchik deep snow on the ground.
7) Giant mine or torpedo.
8) Minesweeper for land and sea mines.
9) An underwater or surface container for marine paratroopers (will crawl out to shore through trapezoidal longitudinal projections).
10) Some hollow armored cores (without engines), prepared for the future, can be used as hangars and as storage for finished products or raw materials, as well as shelters from fragments.
11) And finally - a new type of aircraft heavier than air, suitable for high-altitude flights, is obtained (see Fig. 9), if an extremely lightweight roller is suspended on the axis between the wings (above the cabin) and installed inside this roller (with large outer blades) propeller aircraft engine under normal atmospheric (inside the rink) pressure, producing a center of gravity force displacement similar to ground rollers. It is hard to say how necessary the device is for streamlining the roller. Usually, near the ceiling, the propeller thrust becomes weaker and the efficiency of the motor is made small due to a decrease in pressure. In the new type of apparatus, the motor should not reduce the efficiency. Other applications of the new method of movement (combination of rollers) are also possible, but the apparatus becomes complicated because of the immensity of the scales, even for our country.

In my invention, of course, not everything is new! During the time of slave labor, large wooden barrels of the “squirrel wheel” type were made, which rotated in place by the force of slaves stepping inside them. The new thing is that the rink is rolling, and not only unwinds on the spot and that mechanical force is used, not animals or people.

Historically, a series of: lats! tank! rink! Armor gradually thickens, the number of vulnerable moving parts decreases. This is understandable: otherwise it would be too expensive to armor a unit of volume with armor. Therefore, the appearance of the rink is more natural than the appearance of the fascist armored battleship. No wonder they "covered" them.

1) I consider Metrostroy to be the most suitable organization for the initial sale of samples.

2) I consider the name “VENKOVAL” the most appropriate name for my invention - not only because of natural ambition, but also because the word “Venko” means “victory” in some languages ​​(for example, in Esperanto). It is remarkable that I invented this rink (Fig. 1) at the moment when I heard on the radio about the results of your remarkable next victory. Although, it is true, I had thought many times before how to make the tracks of our tanks invulnerable.
3) If you find it appropriate for me to continue calculations for my invention, then please order me to send modern technical reference books. I really need them, as they are not available in local libraries.

I inform about myself some information. In the past I am a graduate of an orphanage. Now I have the title of engineer captain. I am a teacher in the Bryansk Military Polytechnic School, which is now moving from the city of Khalturin to the city of Kharkov.

Ctrl Enter
Noticed oshЫbku Highlight text and press. Ctrl + Enter
We are
Myth-making continues, or V.V. Pluzhnikov’s “Rover”Heavy tanks of the USSR in the postwar period
38 comments
Information
Dear reader, to leave comments on the publication, you must to register.