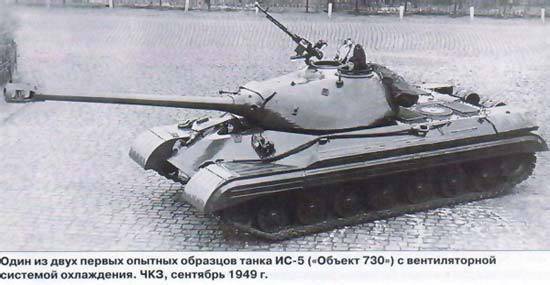 The project with the factory designation "Object 730" was also called EC-5. It is worth noting, the designation with the number 5 already met in the domestic nomenclature of heavy tanks. However, the “Object 248” project, also called the EC-5, did not reach mass production. Work on the new EC-5 started in the last months of 1948. The aim of this project was a deep modernization of the heavy tank EC-4 with an increase in a number of characteristics. It was proposed to replace a number of components and assemblies, as well as lighten the machine to 50 tons. The reduction in combat mass in combination with the use of new units promised a tangible increase in combat qualities.

In the spring of 1949, the group of designers of the Chelyabinsk Tractor Plant, headed by J.Ya. Kotin has developed a preliminary version of the 730 Object project. The prospective tank was significantly different from the base EC-4. He received an updated design of the tower and the hull, in which the developments of the EC-3 and EC-7 projects were used; two options for the new transmission; updated suspension; loading mechanism, etc. The layout of the internal volumes of the corps and the combat compartment has undergone major changes.

Perspective tank received a new tower of the original design. Cast unit with variable wall thickness had a shape close to spherical. With this, it was possible to eliminate the so-called. Zaman between the lower part of the tower and the turret sheet of the hull, and also slightly increase the internal volume of the fighting compartment. The tower mountings on the case were strengthened, and a number of other new solutions were applied. In particular, the tool installation system has changed. The new design was stronger, but it also facilitated the installation of the gun in the tower.

As the main weapons the “Object 730” tank was supposed to use the 122-mm D-25T rifled cannon mounted on new brackets and equipped with an updated lifting mechanism. In addition, the gun was equipped with an electromechanical ammunition discharging system. The mechanism was relatively small and light, which made it possible to place it on the cannon fence.

At the beginning of April, 1949, the technical documentation for the EC-5 / “730 Object” project and the wooden layout of the tank went to Moscow. The military and industry leadership reviewed the project and made a list of necessary improvements. The improved project was approved in mid-May. After this, the preparation of drawings for plants began. It is noteworthy that in the first place documentation was prepared for the most difficult parts of the combat vehicle, requiring relatively long preparation for production. Thus, the drawings of the hull and the tower were transferred to plant number XXUMX and Izhora factory 200 in May 18, and the preparation of the remaining documents was completed only in the twentieth of June.

Work on the construction of experimental tanks EC-5 was delayed, because of what it was decided to use for testing the modified machines model EC-4. In order to have time to carry out tests on time (before the beginning of August), two EC-4 tanks were taken, the mass of which was brought up to the required 50 tons. To do this, they removed the tower and installed additional loads. The power of the B-12 engines during the tests was limited to 700 horsepower. At one of the modified IC-4, the B-12-5 engine was later tested. A number of future units “Object 730” were tested on two EC-7 tanks of the 1947 model of the year, modified in the same way as the EC-4.

In the summer of 1949, several companies developed and tested various units for a promising tank. As an example of such work, one can cite the efforts of the VNII-100 to create an ejection engine cooling system. In total, about 4000 experiments were carried out, in which 50 variants were used to accommodate various parts of the ejector. According to the results of these studies, a straight-through ejector and individual outlet pipes and nozzles were selected. No less intensive studies were conducted by other organizations.

July 30 Chelyabinsk Tractor Plant received the first ready hull of the tank "Object 730". The hull for the second experienced tank entered 9 August. The assembly of prototype tanks was delayed. Some units were not ready, while others were still in the testing phase. However, in the middle of September the assembly of the first prototype was completed. The power plant of the first tanks "Object 730" had a fan cooling system (ejection was not yet ready) and a six-speed planetary gearbox, distinguishing them from other machines built under this project.

In September, passed the factory tests of tanks, which ended in failure. Unfinished transmission did not allow the vehicles to go the kilometers required by the customer 2000. The result of this was the decision to install an eight-speed planetary gearbox on the 730 Object tank, which in its characteristics was superior to the unit used. Soon, the transmission department of the VNII-100 transmission completed the technical documentation on the new gearbox, and the Leningrad Kirov Plant collected three prototypes. Comparative tests of both transmissions under load showed eight-speed advantages.

Tests conducted at the end of 1949 of the year allowed adjustments to the 730 Object project. In January 1950, the creation of updated project documentation began. Now it was planned to equip the new tank with an ejection cooling system, an eight-speed planetary gearbox, a new gun installation system and a number of other units.

In March, 1950, the fleet of prototype EC-5 vehicles was replenished with three more tanks. This technique was equipped with new design gearboxes and new onboard gearboxes. In mid-April, one of the three tanks was sent to the Leningrad Rzhevka training ground, where they tested the mechanisms of the fighting compartment and weapons. After that, all three tanks went to the state tests. For the tests, in which the armored vehicles had to pass 2000 kilometers, a training ground was chosen near the city of Lomonosov. The track of the landfill turned out to be rather difficult for passing: there were swampy and rugged areas with a large number of ditches, funnels and sharp turns. Two test tanks passed 200 kilometers every day during tests, and the average daily mileage of a third car exceeded 280 kilometers. Thanks to this, the test program was completed in just a week and a half. Representatives of the factories and organizations involved in the project closely followed the course of the tests.

According to the conclusion of the commission, all three experimental tanks "Object 730" fully meet the requirements. The reliability of the new machine exceeded that of existing medium tanks. In addition, the project had a certain potential for subsequent modernization. From May to June, the 1950-th three tanks passed the bulkhead and repair, and then participated in the 200-hour engine tests in high temperatures and high dust content of the air. During the repair, some changes were made to the design of the tanks, aimed at improving the reliability of various units. Thus, the drive wheel seal, ventilation of the fighting compartment, brake bands, etc. were modified.

In the summer of 1950, the Chelyabinsk designers, together with colleagues from related organizations, once again refined the project, after which ten EC-5 tanks were built for military testing. In the fall, the tanks of the installation batch, divided into groups, were tested at several test sites in different conditions. At this point, the 730 Object tanks still did not get rid of some of the shortcomings of the transmission and undercarriage, however, in this form, they were able to confirm compliance with the technical requirements.

However, the tank EC-5 was not adopted. At the end of 1950, the military and the Ministry of Transport Engineering compiled a new list of comments and recommendations for finalizing the project. The main work on the next improvement of the project "Object 730" began in 1951 year. The logical result of the improvement of the EC-5 project was its “transformation” into the EC-8 with preservation of the factory index. Work on the project EC-8 dragged on for several years. Only at the end of 1953, this tank was adopted under the designation T-10. Tank EC-5 did not reach the stage of mass production. However, this project allowed creating and testing a number of important units and technical solutions, a little later applied in the EC-8 / T-10 project.

Ctrl Enter
Noticed oshЫbku Highlight text and press. Ctrl + Enter
We are
Armored vehicles of Ukraine: results, potential, prospects ...The fire control devices of the Soviet and German tanks of the Second World War. Myths and Reality
63 comments
Information
Dear reader, to leave comments on the publication, you must to register.