"Russian sniper is something terrible" 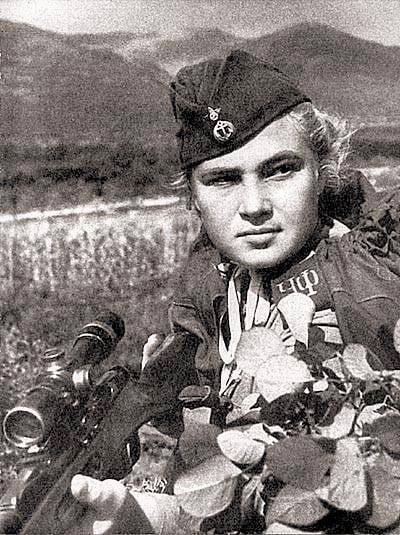 As I remember, ten years ago, a former student of the Central Women's School of Sniper Training A. Shilina told a round table of a popular television program:


“I was already an experienced fighter who had 25 fascists on his account when the Germans started a“ cuckoo ”. Every day, there are no two or three of our soldiers. Yes, it shoots as aptly: from the first bullet - in the forehead or in the temple. Caused one pair of snipers - did not help. No bait. They order us: as you wish, but must destroy. We Tossey, my best friend, dug in - a place, I remember, swampy, around bumps, small shrubs. Began to observe. Day lay in vain, another. On the third, Tosya says: “Let's take it. Whether we remain alive, no, no matter. The fighters are falling ... "

She was shorter than me. A shallow trench. He takes a rifle, fastens a bayonet, puts on his helmet and starts crawling, running, crawling again. Well, I look out. The tension is huge. And I worry about her, and the sniper should not be missed. I see the bushes in one place seemed a little apart. Is he! Immediately took him to the sight. He shot, I'm right there. I hear from the front line shouting: girls, hurray to you! I crawl up to Tosa, I look - blood. A bullet pierced the helmet and ricocheted around her neck. Then a platoon arrived. Raised her - and in the medical unit. It turned out ... And at night our scouts pulled out this sniper. Mature was about a hundred of our soldiers killed ... "

In the combat practice of Soviet snipers, examples are, of course, more abruptly. But he began with the fact of which the front-line Shilina told, not by accident. In the previous decade, with the suggestion of the Belarusian writer Svetlana Aleksievich, some publicists and researchers in Russia are trying to argue in society that the sniper is an overly inhuman front-line specialty, making no distinction between those who set the goal to exterminate half of the world's population and those who opposed this goal . But who can blame Alexander Shilin for the fact given at the beginning of the essay? Yes, Soviet snipers came face to face with the Wehrmacht soldiers and officers at the front, sending bullets at them. How else? By the way, the German fire aces opened their accounts much earlier than the Soviet ones. By June 1941, many of them had destroyed several hundred enemy soldiers and officers — the Poles, the French, the British.

... In the spring of 1942, when there were fierce battles for Sevastopol, a sniper of the 54 Infantry Regiment of the 25 Division of the Maritime Army Lyudmila Pavlichenko was invited to the next part, where Hitler's rifleman brought many troubles. She entered into a duel with the German ace and won it. When we looked at the sniper book, it turned out that he had destroyed the 400 of the French and the British, as well as about the 100 of the Soviet soldiers. The shot of Lyudmila was extremely humane. How many she saved from the bullets of the Nazis!

Vladimir Pchelintsev, Fedor Okhlopkov, Maxim Passar ... During the years of the Great Patriotic War, these and other names of snipers were widely known among the troops. But who won the right to be called ace number one sniper?

Among the many other exhibits, the Central Museum of the Armed Forces of Russia has a Mosin system sniper rifle from the 1891 / 30 model. (KE-1729 number) “Name of the Heroes of the Soviet Union Andrukhayev and Ilyin”. The initiator of the sniper movement of the 136 th rifle division of the Southern Front, political instructor Husen Andruhaev, died heroically in heavy fighting for Rostov. A sniper rifle named after him is established in his memory. In the days of the legendary defense of Stalingrad, the best sniper of the guard, foreman Nikolai Ilyin, defeats the enemy from her. In a short time, he, with 115 destroyed by the Nazis, increases the score to 494 and becomes the best Soviet sniper during the Great Patriotic War.

In August, 1943 th near Belgorod in hand-to-hand combat with the enemy Ilyin died. The rifle, now named after two heroes (Nikolai Ilyin was awarded the title Hero of the Soviet Union 8 in February 1943), was traditionally awarded part sergeant Afanasy Gordienko to the best sniper. He brought his account from it to 417 destroyed by the Nazis. It is honorable weapon failed only when a shell fragment hit it. In total, out of this rifle, about 1000 soldiers and officers are hit. Nikolay Ilyin made 379 accurate shots from it.

What was characteristic of this twenty-year-old sniper from the Luhansk region? He knew how to outwit the enemy. Once Nicholas tracked down the enemy shooter all day. It was felt all over: an experienced professional was lying a hundred meters away. How to remove the German "cuckoo"? He made a scarecrow from a quilted jacket and hard hat and slowly began to lift it. No sooner had the helmet come up in half, almost two shots were heard almost simultaneously: the nazis sewed a scarecrow with a bullet and Ilyin the enemy. 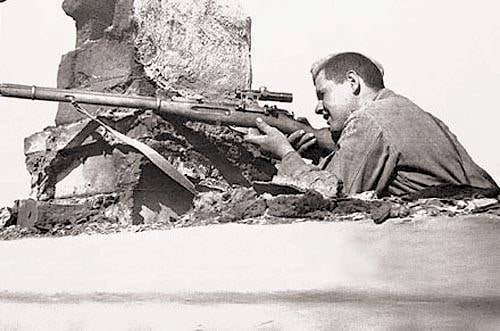 When it became known that graduates of the Berlin sniper school arrived at the front at Stalingrad, Nikolai Ilyin told colleagues that the Germans were pedants, and the classical methods were probably learned. You need to show them the Russian ingenuity and take care of the baptism of Berlin newcomers. Every morning, under artillery shelling, under bombing, he sneaked up on the Nazis for a sure shot and destroyed them without a miss. At Stalingrad, Ilyin’s score increased to 400 of the destroyed enemy soldiers and officers. Then there was the Kursk Arc, and there he again flashed with ingenuity and ingenuity.

Assam number two can be considered a Smolyanin, assistant chief of staff of the 1122 Infantry Regiment of the 334 Division (1 Baltic Front), Captain Ivan Sidorenko, who destroyed enemy soldiers and officers near 500 and prepared snipers for the front near 250. In moments of calm, he hunted the Nazis, taking with him the "hunt" of students.

The third on the list of the most successful Soviet sniper aces is the 59-th sniper of the 21-division of the Guard (2-Baltic Front) of the Guard, senior sergeant Mikhail Budenkov, who defeated 437 of Hitler's soldiers and officers. Here is what he told about one of the battles in Latvia:

“On the way to the offensive was some kind of farm. German machine gunners settled there. It was necessary to destroy them. With short dashes I managed to reach the top of the height and kill the fascists. I did not have time to catch my breath, I see - in front of me on the farm runs a German, with a machine gun. Shot - and the Nazis fell. After some time, the second is followed by a second with a machine-gun box. He suffered the same fate. A few more minutes passed, hundreds and a half fascists ran from the farm. This time they fled along another road farther from me. I fired several times, but I realized that many of them would disappear anyway. Quickly ran to the killed machine gunners, the machine gun was in good condition, and I opened fire on the Nazis from their own weapons. Then we counted about a hundred dead Nazis. "

Other Soviet snipers also differed in amazing courage, endurance and ingenuity. For example, Sergeant Maxim Passar of Nanay (117 Rifle Regiment of the 23 Rifle Division, Stalingrad Front), on whose account 237 destroyed Nazi soldiers and officers. Tracking down an enemy sniper, he pretended to be killed and spent the whole day in a neutral field in an open field, among the dead. From this position, he sent a bullet into the Nazi shooter, who was under the embankment, in a pipe to drain water. Only in the evening, Passar was able to crawl away to his. 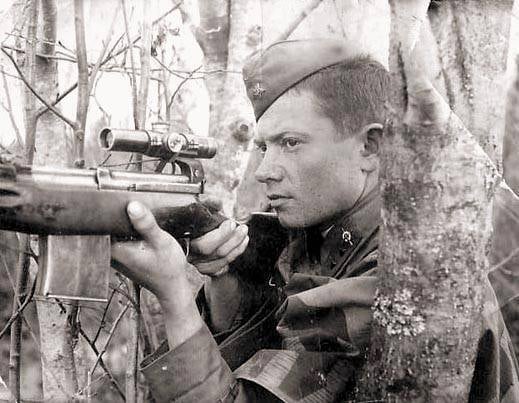 The Americans wrote: “Russian snipers showed great skill on the German front. They prompted the Germans to manufacture large-scale riflescopes and training snipers. ”

Of course, one can not say how the results of Soviet snipers were recorded. Here it is appropriate to refer to the materials of the meeting held in the summer of 1943 by the Vice-Chairman of the Council of People's Commissars K.Ye. Voroshilov.

According to the recollections of Vladimir Pchelintsev, an ace sniper, those present at the meeting suggested introducing a single, rigorous procedure for recording the results of combat work, a single “Sniper Personal Book” for all, and in the rifle regiment and a company - “Logs of combat snipers”.

The basis for taking into account the number of destroyed Nazi soldiers and officers should be the report of the sniper himself, confirmed by eyewitnesses (company and platoon observers, artillery and mortar spotters, intelligence officers, officers of all degrees, commanders of units, etc.). When counting the destroyed Nazis each officer equate to three soldiers.

In practice, mainly accounting was kept. Perhaps the last item was not respected.

Separately, it should be said about female snipers. In the Russian army they appeared during the First World War, most often they were the widows of Russian officers who died in the war. They sought revenge on the enemy for their husbands. And in the first months of the Great Patriotic War, the names of female snipers Lyudmila Pavlichenko, Natalia Kovshova, Maria Polivanova became known to the whole world. 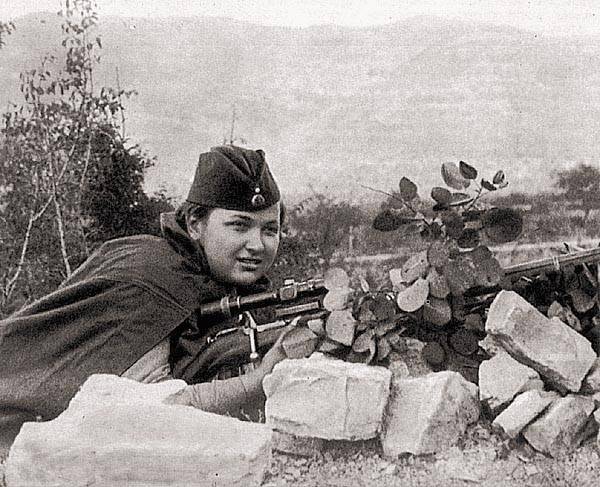 Lyudmila, in the battles for Odessa and Sevastopol, destroyed the 309 Nazi soldiers and officers (this is the highest result among female snipers). Natalia and Maria, on whose account more than 300 of the Nazis, glorified their names with the unparalleled courage of 14 of August 1942 of the year. On that day, not far from the village of Sutoki (Novgorod Region), Natasha Kovshova and Masha Polivanova, beating off the onslaught of the Nazis, were surrounded. With the last grenade, they blew themselves up and the German infantrymen who surrounded them. One of them was then 22 of the year, another 20 of years. Like Lyudmila Pavlichenko, they were awarded the title Hero of the Soviet Union.

Following their example, many girls decided to master sniper skills in order to participate in fights with weapons in their hands. They were trained in supermarking shooting directly in military units and formations. In May, the Central Women's School of Sniper Training is created by 1943. Over its 1300 girls went over the walls of her snipers. During the battles, the pupils destroyed more than 11 800 Nazi soldiers and officers.

... At the front, Soviet fighters called them "ordinary without a miss," as, for example, Nikolai Ilyin at the beginning of his "sniper career." Or - “without a miss sergeant”, like Fedor Okhlopkov ...

Here are the lines from the letters of the Wehrmacht soldiers that they wrote to their relatives.

“Russian sniper is something terrible. From him you can not hide anywhere! In the trenches can not raise your head. The slightest negligence - and immediately get a bullet between the eyes ... "

“Snipers often spend hours in the same place in ambush and take on the fly everyone who shows up. Only in the dark can you feel safe. "

“Banners are hanging in our trenches:“ Careful! Russian sniper shoots! "

Ctrl Enter
Noticed a mistake Highlight text and press. Ctrl + Enter
We are
Russian bayonet"St. Petersburg" company
182 comments
Information
Dear reader, to leave comments on the publication, you must to register.