December 5 2013
27
In early December, domestic media and specialized Internet sites recalled one interesting development by Russian designers, first shown at the end of July. Recall 31 July at the Rzhev test site held a field meeting of the Board of the Ministry of Defense. In addition to discussing various issues in the program of the event was an exhibition of the achievements of the defense industry. Among other enterprises and organizations, the Central Research and Development Institute of Robotics and Technical Cybernetics showed its developments. It was reported that the attention of the Minister of Defense S. Shoigu was attracted by small-sized robotic complexes "Yula" and "Grain", as well as the adopted mobile complex designed for reconnaissance and destruction of targets using small and flamethrower weapons. 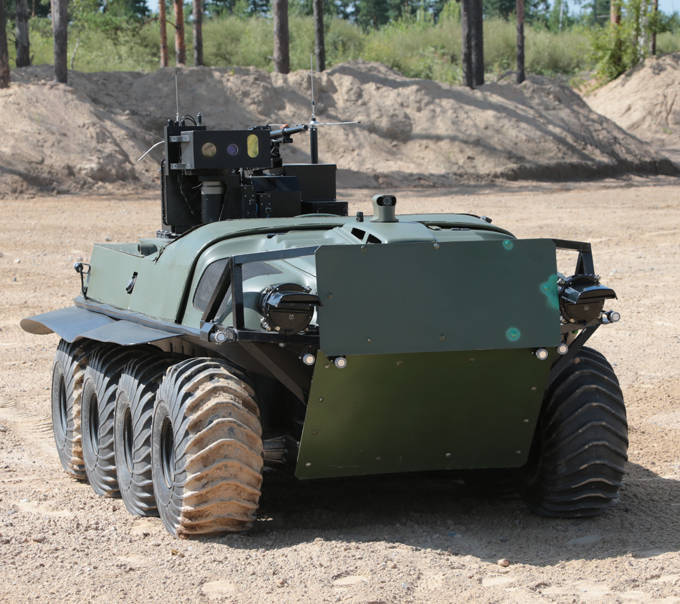 From the messages of the end of July, it followed that a new robotic complex had already been adopted by our army. However, almost nothing was known about this complex at that time. Soon information appeared in the media about the approximate characteristics of a promising unmanned combat vehicle. In addition, a possible designation of the project was published - RBTC. Unfortunately, even a few months after the exhibition at the Rzhevsky proving ground, very little is known about the new project. Nevertheless, even the available information allows us to imagine what the RBTC complex is capable of in the form in which it was demonstrated to the leadership of the Ministry of Defense.

The new robotic complex is based on a four-axle chassis, in which the interested public almost immediately recognized the modified snow and swamp vehicle of the ARGO family. Cars of this brand are manufactured by the Canadian company Ontario Drive & Gear Limited and are used in various areas where you need to get to any objects over rough terrain. After some refinement, the four-axle chassis becomes the basis for the RBTK combat vehicle. As you can see in the photographs of the new robotic complex, the base chassis, when converted into a remotely controlled combat vehicle, undergoes several changes. Frontal armor plates and a reinforced bottom are installed on it.

Unfortunately, the model of the basic snow and swamp vehicle was not announced, which is why it is impossible to accurately name the type of power plant. Four-axle cars brand ARGO equipped with gasoline engines of several types with a capacity of about 20-30 HP According to reports, the RBTC complex can move over land at a speed not exceeding 20 km / h, and can also swim at speeds up to 2,5 nodes. When traveling by water, the front booking sheets function as a wave deflector. Depending on the situation, the calculation of the RBTC robotic complex can choose one of two propulsion options. If the characteristics of the wheels are insufficient, the machine can be equipped with fast-mounted tracks. 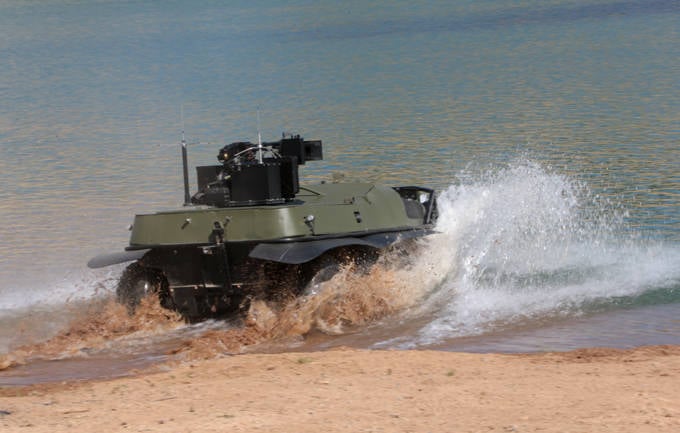 The RBTK machine turned out to be one of the largest exhibits at the Rzhevsky range. Its length exceeds the 3,3 meter, the total width reaches the 1,8 meter, and the height is 1,65 m. The total curb weight of the machine reaches 1020 kg. Such dimensions and weight allowed to equip the car with fuel tanks of large capacity. The declared time of continuous work is 20 hours.

The RBTC complex, as follows from the available information, uses a control system over the air. For the convenience of the operator, the machine is equipped with several video cameras on the body. The signal from the cameras is transmitted to the remote control panel and displayed on the monitor. Using the console, the operator of the complex can control the operation of all systems.

When converting the base snow and swamp vehicle to a combat vehicle, a new roof is installed on it, covering the cargo platform and crew space. A combat module is mounted above the cargo platform of the base vehicle on a new roof. A sample of the RBKT complex on display in July was armed with a PKT machine gun of 7,62 caliber mm. To search for targets and target weapons, the combat module is equipped with an aiming unit. Judging by its appearance, a video camera, a thermal imager and, possibly, a laser range finder are used. It is argued that the combat module of the RBTC complex can carry and use jet weapons: grenade launchers or flamethrowers. 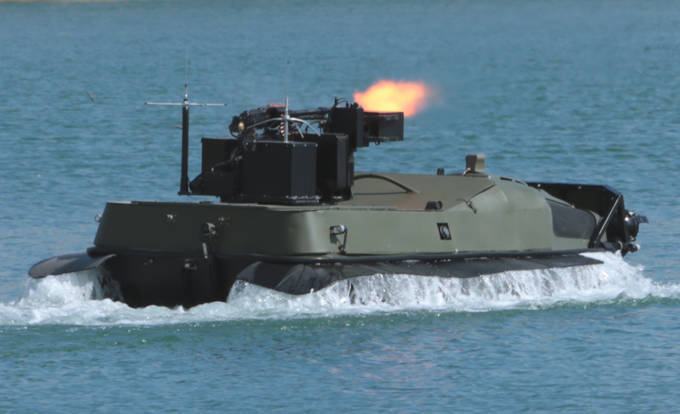 The remotely controlled robotic complex RBTC can be used to perform various tasks. Thus, machine-gun and jet weapons allow reconnaissance and, if necessary, destroy manpower or unprotected or lightly armored equipment of the enemy. In addition, the complex, devoid of combat module, can be used to deliver any cargo, including crossing water obstacles.

Judging by the available information, the RBTC design for the robotic complex is of interest to the military, but some of its features may raise questions. First of all, this is the base chassis of foreign production. Despite the characteristics, a similar choice of the base machine looks ambiguous and can cause controversy. The second feature of the RBTC project, which gives rise to certain doubts, is booking. In the existing photos it is clear that the installed armor protects only the front part of the hull and the bottom. The remaining parts of the car, apparently, do not even have such protection, which is associated with the limited characteristics of the base chassis. Thus, the survivability of the complex RBKT when performing a combat mission is in question.

In general, the available information does not allow us to consider the robotic complex RBTC as a full-fledged combat tool. Nevertheless, while developing this project, the specialists of the Central Research Institute of Robotics and Technical Cybernetics gained experience in the development of remote-controlled military equipment. Therefore, in the very near future, at the next exhibition of achievements of the defense industry, a new robotic complex may appear, designed to solve various combat missions, which will be deprived of the shortcomings of the current RBTC.