Do not recognize the territorial integrity of Russia? 20 yo think

December 5 2013
168
On the Day of Lawyer, President Vladimir Putin held a meeting with students of law faculties of metropolitan universities in the Moscow State University. The meeting discussed a variety of legal issues, constitutional clauses, and among all these issues, at least one seems to be particularly interesting. This question was asked by a graduate of one of the law schools. The question is related to whether one should ignore the statements of individual citizens (and often very reputable citizens) that, they say, Russia today is not able to cope independently with the development of all its territories. Is it worth it to introduce a certain responsibility of a person for statements about the possibility and, especially, about the need for several reasons to share Russian territories with certain states? At the same time, the young man who asked such a question noted that the “proposals” to share Russian lands today are not at all like freedom of speech, but to a greater degree resemble frank calls for violating the territorial integrity of the state. 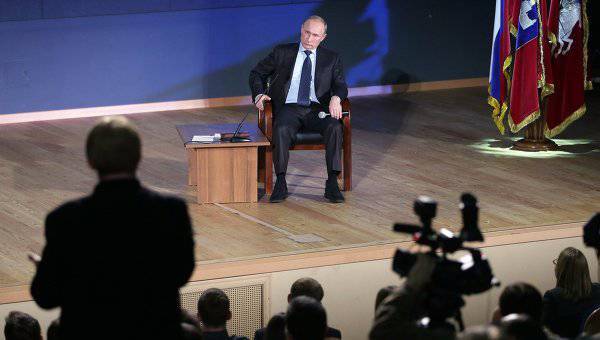 The president responded by saying that he was already familiar with the idea of ​​introducing criminal liability for statements about the need to tear away Russian lands in favor of foreign states. Sign, in particular, from the proposals of the Communist Party leader Gennady Zyuganov. It should be noted that those same Zyuganov proposals also did not appear from scratch. Recently it has become, if not fashionable, then for certain Russian citizens, it is quite natural to argue on the need to make territorial gifts to the neighbors on the globe. In particular, the director Sokurov argued about the need to transfer the Kuril Islands to Japan in 2011, stating that our people need to learn a lot from the people of Japan. More recently, on the Echo of Moscow radio station, journalist Evgenia Albats has broken out with the idea that nothing bad will happen for Russia if the country is divided along the Ural ridge. Professor of the HSE Sergey Medvedev said:

Russia has not brought anything good to the Arctic and will not bring it.

In an amicable way, Russia, as a failed and irresponsible host, has the Arctic to be taken away and put under international jurisdiction, like Antarctica, with a total ban on economic and military activities.

The Russian public is already familiar with the president’s reaction to Sergei Medvedev’s remarks. By the way, it was these words of the HSE professor that served as a reason for the deputy community to take the initiative to think about imposing criminal liability for calls for the division of Russia. How did the president react to such an initiative?

Vladimir Putin said that such statements can not be left without attention. At the same time, according to Putin, it is very important, as they say, not only not to overdo it with measures of responsibility, but also with underestimating the harm of the statements themselves. Referring to the conversation of the same Arctic, Putin noted that all the environmental problems that exist in the Arctic are manifested there not today and not yesterday:

Since Soviet times, left. What are we doing now? We are clearing the Arctic, we did it for the first time in 30, or maybe 50. Therefore, we need to talk about what we need to manage better in the Arctic. Yes. But to talk about how to reject the territory ...

At the same time, Putin noted that environmental problems today are not only complete in the Arctic, but this does not mean that those places where there are such problems need to be transferred to someone:

Do we have everything good in the Pskov Region? Maybe give the Pskov region? And what about us, ideally in Ryazan or in the Chelyabinsk region? There are also many problems. When I meet with statements of this kind, people either publicize themselves in such a way, not realizing what they are doing, or they are unscrupulous observers, or they are people who serve the interests of other states.

There (speaking about the Constitution) it is expressly stated that the state ensures the territorial integrity of the country, therefore any statements about the rejection of any territories from the Russian Federation are unconstitutional.

This task - to the deputies of the State Duma, to criminologists, specialists, to you (graduates of law schools).
Passing by such things and not noticing such things is definitely not to be done. It is necessary to notice and evaluate and say, and even more so, actions of this kind.

Meanwhile, the corresponding bill has already been submitted to the State Duma, according to which it is necessary to introduce criminal responsibility for appeals to extremism and, in particular, for denying the territorial integrity of the country. According to the letter of this bill, a citizen who, through the media, official position, an organized group or the Internet, calls for the rejection of one or another territorial part of Russia, threatens from imprisonment from 10 to 20. The bill, which is based on the above proposals of Gennady Zyuganov, will include deputies Mikhail Yemelyanov (“Fair Russia”), Yevgeny Fedorov and Anton Romanov (both are “United Russia”) under consideration in the lower house of parliament.

Of course, the responsibility for expressing the need for someone to transfer some part of the territory of Russia to transfer is a thing that is right and ripe. After all, if such reasoning becomes a habit in some circles, then future generations may have a sort of stereotype that we owe something to someone. And this can not be allowed. If someone is eager to transfer something to Japan, Estonia, the United Nations or someone else, then let him start with his personal property, it is possible and with himself - at least in parts ...

But one thing is statements about the denial of the territorial integrity of Russia, and another thing is actions. Those Sokurov with Albats and Medvedev (who is Sergey) - scratch their tongues to attract attention to their people, and after all, all the real possibilities of making territorial "gifts" are concentrated in the hands of the Russian authorities. How to deal with such, to put it mildly, strange geographically equatorial gifts like:

a) the most resource-rich part of the Barents Sea - Norway;
b) island territories on the Amur - China.

You can think for a long time about the fact that it was necessary to concede “some” island to a neighbor in order to obtain from it “eternal” guarantees of friendship and increase in the number of economic preferences. But such reflections, as they say, are not substantive. Not in essence, since friendship seems not to be sold or bought. After all, in order for a neighbor to greet and smile widely, no one signs him, for example, his bedroom or hallway ... Too generous, even if the neighbor is, well, a very good person.

And it’s not even so important who exactly such documents about the “offerings” in relation to the PRC and Norway were signed. The precedent is important. After all, where there is one gift, there may be a second, and there, where the second - and the third. That is why if responsibility is introduced, then it should be introduced not only for appeals, but also for actions. Otherwise, the effect of the initiative will be more like populism. But who is capable of catching the hand of those who give away land, not in words, but in deeds - this is a separate question ...

Ctrl Enter
Noticed oshЫbku Highlight text and press. Ctrl + Enter
We are
Results of the week. "Aria of the Moscow Guest"Situational analysis of the death of the MH17 flight (Malaysian Boeing 777), made on the basis of engineering analysis from 15.08.2014
168 comments
Information
Dear reader, to leave comments on the publication, you must to register.