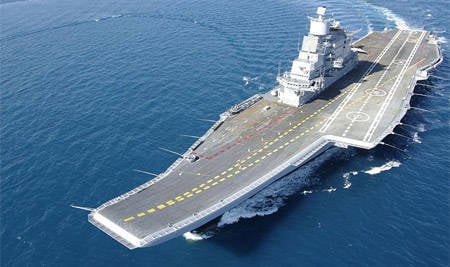 After the ceremonial transfer of the Vikramaditya nuclear aircraft carrier to India, Dmitry Rogozin said: “What happened today is a demonstration of the readiness and restored ability of our country to build ships of this class.” Experts of the Russian Navy told Expert Online that the government’s decision to include aircraft carriers in the state armaments program up to 2025 depended on the successful delivery of this ship to the customer. The Defense Ministry confirmed: doubts about the scientific and technological potential of domestic shipbuilding are completely dispelled, and Russia will still build atomic aircraft carrying cruisers for the Northern and Pacific fleets.


The aircraft carrier Vikramaditya (former Russian cruiser Admiral Gorshkov), which was solemnly handed over to the Indian on November 26 the fleet set off from Severodvinsk to a place of permanent basing. The ship has to overcome the way through three oceans and several seas to the port of Karwar in India. It is planned that the Vikramaditya will reach the base in late January. Admiral of the Indian Navy Irruvan Shakr admitted that "the ship is better than all praise."

Sevmash engineer Igor Torov, participating in the Vikramaditya project from beginning to end, said: “All these years we were scolded, they said that our country is not capable of developing the design and construction of the most complex class of ships - atomic aircraft carriers within a reasonable time. The government every time wrapped up our projects. And we proved the opposite. It turns out that we can do this and dozens of high-tech industries revive from scratch the cooperation of hundreds of enterprises as a watch. But this autumn was on the nerves of the whole team, several people even had to be sent to the hospital. After all, everyone understands that the future of Russian shipbuilding depended on this project. ”

In Severodvinsk, at the ceremony of handing over the aircraft carrier of the Navy of India, Russian Deputy Prime Minister Dmitry Rogozin said: “What happened today is a demonstration of the readiness and restored ability of our country to build ships of this class.” “The presence of aircraft carriers in our fleet is a matter of geopolitics, not of the country's defense. But, of course, if it is determined that such ships will become necessary, I am sure that Russian industry will be able to cope with this, ”he stressed.

Now, it was decided to take seriously the aircraft carrier fleet. According to the plans of the Defense Ministry strategists, in 2017, the construction of two aircraft carriers will begin in Severodvinsk. In 2023, they will be launched, in 2027, the Northern and Pacific fleets will each have one aircraft carrier group. Each of them must enter up to 15 cruisers, destroyers, frigates, corvettes, submarines and even landing ships. Already at the beginning of 2014, the Russian President will be presented with a plan for the future development of the fleet on 40 years in advance. Now only one aircraft carrier is in service with the Russian Navy - the Admiral of the Fleet of the Soviet Union Kuznetsov, built in the middle of the 80's, which is part of the Northern Fleet grouping.

The source “Expert Online” in the General Staff of the Navy, who wished to remain unnamed so far “so God forbid that it would not jinx it,” said: “The ice has broken. After the end of the project of the first post-Soviet aircraft carrier on the request of an extremely demanding customer, the political leadership of Russia gained faith in the capabilities of our industry and engineering institutes. You have no idea what kind of movement is now taking place in the cabinets - the new state armaments program is being corrected in view of the formation of the first aircraft-carrying shock groups. In fact, we practiced on the Indian order to avoid systemic investment risks - we worked out technologies and design solutions. ”

Recall 25 June 2012, the new Commander-in-Chief of the Russian Navy, Vice Admiral Viktor Chirkov has already announced plans for the creation of aircraft carrier groups. And for the first time, Anatoly Serdyukov, the then Minister of Defense, announced plans to build aircraft carriers in November 2011 of the year. He noted that the Defense Ministry had ordered an advance design of the ship from the United Shipbuilding Corporation, but the financing of the construction of aircraft carriers by the Russian state armaments program for 2011-2020 had not yet been provided due to doubts of the top military leadership regarding the readiness of Russian science and industry in some reasonable time to design and build a modern nuclear aircraft carrier. After all, the surrender of the same “Vikramaditya” due to technical problems was transferred already 6 times.

Earlier, Chirkov’s predecessor as commander-in-chief of the Navy, Vladimir Vysotsky, in an interview with RIA News stated that the technical design of the new aircraft carrier for the Navy will be developed before 2014, and the ship itself will be built after 2020. According to him, the new ship will not be an aircraft carrier in the classical sense of the word - it "will be one step ahead." "We (the Navy and the industry) have planned the work, and the fleet will receive new destroyers, cruisers and aircraft carriers. This requires knowledge to apply this weapon", - said Chirkov in St. Petersburg at a ceremony honoring graduates-honors of the naval universities of Russia.

In 2011, in the initial draft strategy of the Ministry of Defense, it was recognized that "For the effective implementation of the tasks set, Russia needs an aircraft carrier fleet." After many years of debate whether the fleet needs a large ship with planes or if atomic submarines and cruisers can be dispensed with, the admirals chose the “American” model of the fleet — ship groupings with an aircraft carrier in the center. According to the military, this arrangement will expand the zone of influence of the Russian fleet in the Pacific Ocean and the North Atlantic. “No other composition of the naval group can be compared in effectiveness with the carrier group. The appearance of a solid aircraft carrier group in the problem area, which is constantly moving, will draw the attention of the likely enemy from Russian territory. In addition, in principle, any aircraft carrier allows you to expand the range of the fighter aviation Russia away from their native shores, ”the representative of the Navy’s General Staff explained then to Izvestia.

According to the project, approved but not included in the State Armaments Program until 2020, it was assumed that they would build a new Russian aircraft carrier at two different shipyards in a modular fashion. And it was planned to assemble modules made independently from each other at the largest Russian shipbuilding plant Sevmashpredpriyatiya (Sevmash). “Creating a new shipyard specifically for an aircraft carrier can take at least four years and" eat "the lion's share of the budget of this project. It is much more efficient to use existing facilities for construction, ”the project noted.

A year later, the Russian Navy reported that it was completing the formation of a technical task for a new aircraft carrier. Its initial appearance was supposed to be determined already in 2013, and the final design of the ship should have been ready for 2017. USC President Roman Trotsenko stated that in this case the first ship is supposed to be launched in the 2023 year. By this time, the Navy should complete the formation of an escort grouping for each aircraft carrier, which will consist of missile cruisers, destroyers, multipurpose submarines, frigates, corvettes, amphibious ships and support vessels, including icebreakers for the Arctic zone - only about 15 ships in each. Last year, at a press conference, Dmitry Rogozin let it slip that by next year “production facilities will allow us to build 6 submarines and one aircraft carrier every year.”

True, among the expert community there are opponents of the AUG idea, who consider the new concept of the Navy to be expensive and useless. For example, Alexander Khramchikhin, deputy director of political and military analysis, said: “With two or even four aircraft carriers, we will not be able to withstand the naval forces of even the United States alone, especially NATO as a whole. Moreover, we will not be able to fight even against the PLA Navy, since China is going to build at least 4 aircraft carriers that will oppose our only Pacific (or even two). As a result, the only conceivable option for the use of aircraft carriers in the event of a “big” war (with NATO or China) is to move the line of air defense and antiamphibious defense a few hundred miles from its shores. There is a suspicion that such a task is much cheaper and more efficiently can be solved by developing and improving the Air Force, Air Defense, coastal SCRC and the submarine fleet. Especially considering the fact that our aircraft carriers with such a variant of their use will be "disposable" products. There remains the option of using aircraft carriers for "raiding" operations in the countries of the "third world". However, it is difficult to understand why we need it. We do not need to seize other people's resources, to keep ours ”.

Ctrl Enter
Noticed oshЫbku Highlight text and press. Ctrl + Enter
We are
5-I operational. Interview of Admiral Retired Selivanova Valentin Egorovich"Vikramaditya" and the prospects for the construction of large carrier-based carriers in Russia
122 comments
Information
Dear reader, to leave comments on the publication, you must to register.