Why Turkey refuses the project to restore the Ottoman Empire 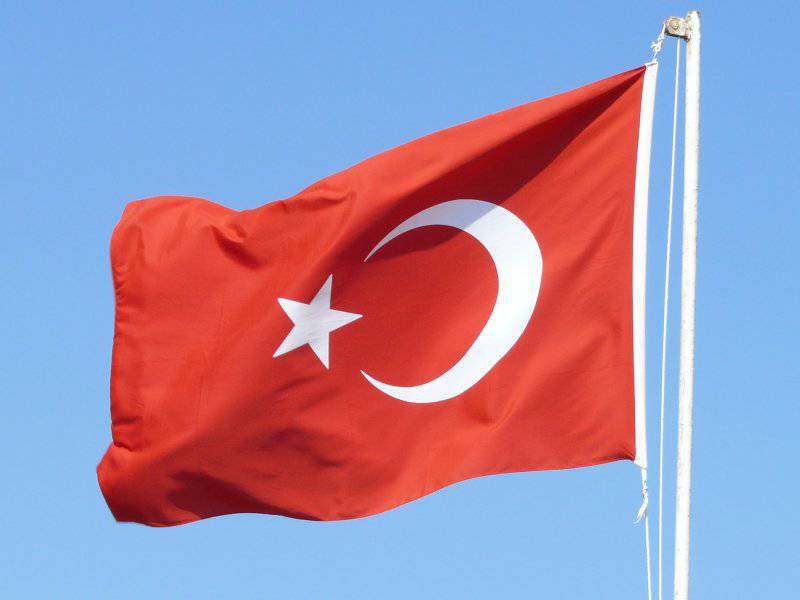 Turkey, which was one of the main instigators and organizers of the Middle East revolutions and even hoped to revive the Ottoman Empire with their help, was unexpectedly among the losers from the events of the Arab Spring. Now Foreign Minister Ahmet Davutoglu, who has long been called the “Turkish Kissinger,” is trying to formulate a pragmatic foreign policy ideology designed to replace neo-Ottomanism: he talks about a new turn of rapprochement with the West, returns to the ideas of European integration and suggests turning the country into the largest energy hub.


Exactly a year ago, Turkish Prime Minister Recep Tayyip Erdogan made his triumphal tour of the Maghreb countries. In Egypt, Tunisia and Libya, where shortly before the secular regimes were overthrown in a peaceful or bloody way, Erdogan was hailed as a hero. In all three countries, the ideologically close to the ruling party of the AKP "Muslim Brotherhood" (in the Tunisian version of "An-Nahda") were in power at the time. Today there is no trace of the former admiration of Turkey in the Arab world.

According to many experts, Ankara’s relations with Cairo can be described using the term “cold war”. Turkey sharply criticizes the government of General Abdel Fattah el-Sissi for the "anti-constitutional coup" and the persecution of the Muslim Brotherhood. The new regime in Cairo accuses the Turks of interfering in the internal affairs of Egypt: cooperation with Ankara was frozen, the Turkish ambassador was expelled from the country. And given the fact that the el-Sissi enjoys the support of Riyadh, Ankara’s last demarches have had a negative impact on Turkish-Saudi relations. To be convinced of this, it is enough to listen to what fierce criticism is Erdogan subjected to on the Al-Arabiya television channel controlled by the Saudis.

However, the Turkish Premier’s greatest harm was caused by the reckless support of the anti-Assad armed opposition in Syria. Despite the patriotic speeches of Erdogan, who called for supporting an aggressive course against Damascus, the intervention in Syrian affairs caused a deep division in Turkish society. If in the 2011 year, according to public opinion polls, 44% of Turks supported the AKP’s position, in the fall of 2013, two thirds of the respondents were already against the government policy. For many Turks, the moment of truth was an explosion that occurred at the end of May of this year in Reykhanly, a town that is located near the Turkish-Syrian border. After this tragedy, it became clear to many that an uncontrolled flow was going across the border in both directions. weapons and terrorists, and Turkey itself is becoming increasingly vulnerable to al Qaeda militants.

The eternal opponents of the Islamists - the Kemalist and left-wing parties - did not hesitate to take advantage of the failures of the government in the Syrian direction. The leader of the People’s Republican Party, once founded by Ataturk, Kemal Kilicdaroglu, accused the government of Erdogan of adventurism, and even made a trip to Damascus, where he expressed solidarity with Bashar Asad. Leader of the Nationalist Movement Party Devlet Bahcheli in June of this year noted that "Western countries are putting pressure on Turkey, urging it to invade Syria, but the politicians in Ankara should not fall into this trap." And one of the leaders of the Workers' Party of Turkey, Hassan Basri Ozbey, even threatened to impeach President Gul for "inciting war, supporting terrorism in Syria and secret agreements with the United States" (all this, he said, can be considered proof of betrayal of the Motherland ").

However, in the ranks of the ruling Justice and Development Party, there is a growing understanding that the strategy chosen by Erdogan in the Syrian sector has led the country to a standstill. This position was voiced by none other than President Abdullah Gul. Speaking about 8 in October in Istanbul, he subjected Ankara’s alarmist course to revision and stressed that the United States should share responsibility for the fate of the Middle East with other leading powers: Russia and Iran. Gul noted that the American-Iranian negotiations would help resolve the Syrian crisis, and finally admitted that radical and extremist groups were operating in Syria. He said that he hoped for a "comprehensive diplomatic and political solution to the problem" and "the creation of a new administration reflecting the aspirations of all groups of the Syrian people." Interestingly, Gul never criticized Bashar Assad and did not accuse the Syrian government of using chemical weapons.

Return to the West?

Obviously, the failures in the Syrian direction and discord with the states that survived the “Arab Spring” force Ankara to reconsider its relations with the United States. The Turks are carefully eyeing the new American policy in the Middle East and see in it for themselves certain benefits. After all, they have always been interested in resolving the Iranian nuclear issue (we recall that even during the 2009 negotiations of the year, Turkey tried to mediate between Washington and Tehran). The withdrawal of the Islamic Republic from international isolation will allow Ankara to extract tangible dividends (first of all, we are, of course, talking about the transportation of Iranian hydrocarbons through Turkey).

Another important point: when the Turkish elite realized that the way to the Arab East was closed for it, it returned to the ideas of European integration, and very much hopes that Washington will help it “put the squeeze” on Europe. The need to strengthen the strategic partnership between Ankara and Washington was recently announced by Turkish Foreign Minister Ahmet Davutoglu. In an article published in the influential American journal Foreign Policy, he, in particular, noted: "The rapprochement with the West during the Arab Spring proves that democratic values ​​are at the heart of Turkish foreign policy."

Davutoglu hinted that the United States could help the Turks in the process of European integration: “We believe that Turkey will play a more constructive role in shaping the future of Europe. In our negotiations with the EU, a new chapter has opened, related to the simplification of the visa regime. In addition, NATO is still the cornerstone of the Turkish security policy. We are developing cooperation with the West everywhere - from the Balkans to Central Asia, and in many respects this allows us to ensure stability in Eurasia. ” Davutoglu welcomed the thaw in relations between the United States and Iran, saying that “Obama’s multi-vector diplomatic approach inspires hope for peace in the Middle East region.”

However, despite the eulogies to the United States and the oath of allegiance to NATO, the Turkish leadership is far from coordinating its actions with the Americans. Washington’s certain inconsistency in the Syrian direction has once again proved to the Turks that the United States has no permanent allies, but only permanent interests. It is no coincidence that Ankara is trying to insure itself even in military-strategic issues, developing cooperation with other major powers. An example of this is the recent arms deal with China. At the end of September, the Turkish government signed a contract with China for the supply of FD-2000 missile defense systems, which are a modernized version of the Russian C-300 systems. The complex is capable of striking cruise missiles (7 – 24 km), airplanes (7 – 125 km), air-to-surface missiles (7 – 50 km), guided bombs and tactical ballistic missiles (7 – 25 km). This deal has no precedent. The state entering the North Atlantic Alliance, for the first time, buys non-NATO strategic armaments. True, it is not entirely clear how Beijing will explain this contract to Iran, which is still the main buyer of Chinese weapons in the region. Most likely, experts say, the Chinese will calm their partners in Tehran, making it clear that by acquiring their systems instead of Raytheon missile defense systems, the Turkish army will not be able to fit into the NATO missile defense system.

It's all about the pipe

In November of this year, Ahmet Davutoglu developed unimaginable activity. He visited the United States, attended Erdogan and Putin’s meeting in St. Petersburg, visited his Iranian counterpart Mohammed Javad Zarif and held talks with Iraqi Prime Minister Nouri al-Maliki. In Baghdad, he needed to get the loyal attitude of the authorities to the opening of a pipeline pumping oil from Iraqi Kurdistan to Europe through Turkish territory. This pipeline duplicates the Kirkuk-Ceyhan pipeline controlled by Baghdad (this line with the theoretical capacity of 1,6 million barrels per day is loaded only by one-fifth, besides, explosions occur with enviable constancy). The new pipeline will have a capacity of 250 000 barrels per day and, according to experts, will deprive Baghdad of the last levers of influence on Kurdish autonomy, which, in fact, will receive economic independence.

For Ankara, this oil transportation route has both economic and political advantages. He will vividly demonstrate who the true friend of the Kurds is, and may even convince them of the need to cast their votes for the candidate of the ruling Islamist party in the presidential elections to be held next year.

The current Turkish elite has long dreamed of turning the country into the largest hub for the transportation of Asian and Middle Eastern hydrocarbons to Europe. Let us recall the Nabucco gas pipeline project, which was launched five years ago by certain circles of the EU in order to fill the markets of Western Europe with gas from anywhere (from Turkmenistan, Azerbaijan, Iraq, even Egypt), but not from Russia. After Turkmenistan completely reoriented its gas exports to Asian markets, experts talked about the loss and futility of this project. And with the start of construction of the South Stream, Nabucco began to play the modest role of the Trans-Adriatic Pipeline, through which it is planned to supply minor volumes of Azerbaijani natural gas to Italy.

However, this does not mean that for Gazprom there are no more threats from Turkish territory. If the West really refuses the economic sanctions now against Tehran, the plans for the supply of Iranian natural gas to Europe, which were developed at the beginning of 2000, will almost certainly be revived. And it is clearly interested in the current Turkish elite.

Erdogan’s megaproject, which is connected with the construction of the “second Bosphorus” - the 50-kilometer navigable channel connecting the Black Sea with the Mediterranean, is also causing concern. If this project is implemented, it will cause enormous damage to Russian interests. Indeed, as a result, the international conventions in Montreux will be revised, allowing our large-capacity vessels to cross the Bosphorus and the Dardanelles unhindered. In general, with all the variety of economic ties between Russia and Turkey, it must be remembered that we remain constant competitors in Eurasian projects and a strategic partnership between our countries in the foreseeable future is hardly possible.

Ctrl Enter
Noticed a mistake Highlight text and press. Ctrl + Enter
We are
Stanislav Tarasov. Crowds at the throne: Turkey falls into a pre-election feverWhere does Emir Erdogan lead Turkey?
42 comments
Information
Dear reader, to leave comments on the publication, you must to register.