Who and what are they going to teach in Moscow centers of tolerance?


In the "centers of tolerance" it is planned to conduct course training in the following areas: teaching the Russian language, seminars on the study of the rights and duties of visitors, talks about stories and the culture of Russia, classes with applied orientation (as an example is given such an option as teaching migrants to use the Moscow metro and a story about the features of the Moscow subway device). Over time, such centers will be celebrated and celebrations of particularly revered all-Russian and national holidays, - this is also reported by employees of the Centralized Library System of the Central Administrative District of Moscow. 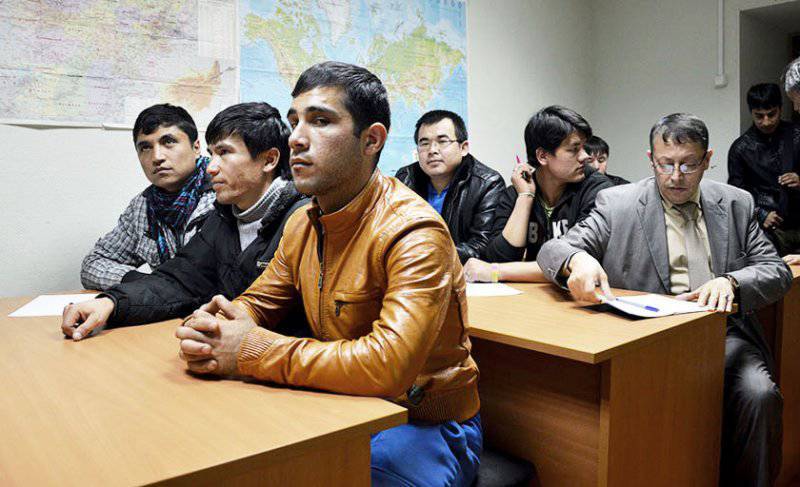 If you believe the representatives of the Central Library System of the Central Administrative District of the Russian capital, now the tolerance centers are visited by 40 people (each) at the same time, and the migrants express a keen interest in what they teach.

On the one hand, the idea of ​​raising the level of education among those who come to Russia in general, and Moscow in particular, is humane and correct. Obviously, the higher the level of knowledge of the Russian language, Russian culture, Russian traditions, the laws of the Russian Federation in the migrant environment, the less problems for traditional (local) society migrants will create, the less will be the very possibility of their involvement in various extremist groups, less chance embark on criminal ways. This is all rational, and looks very effective work. However, the other side of this issue is clearly present. What is it?

Representatives of the Central Library System of the Central Administrative District of Moscow state that the currently open 7 tolerance centers operate solely on the enthusiasm of the CBS staff. In other words, this initiative is not at all state or even municipal, and therefore, sooner or later, its implementation will require external funding. The Centralized Library System confirms the fact that, without budget financing, the centers of tolerance will not be able to survive for a long time, and they note that already from next year they hope from the Moscow authorities to get approximately 300 thousand rubles to finance each of these centers. In this case, special emphasis is placed on the fact that 300 thousand rubles (the amount seems to be completely non-astronomical) will be needed to create new manuals. By simple mathematical calculations, you can get the amount of budget funding for 30 preparing for opening in the Central Administrative District of the capital of tolerance centers in 9 million rubles. For the Moscow budget, again, the amount cannot be called very heavy, but the fact is that the budget of the capital (as well as the budget of any other settlement of the country) is filled at the expense of the labor activity of the residents of this city. To this amount, obviously, you will have to add a percentage to the salary for those library employees who will be forced to conduct classes with migrants. After all, the visitors of the library are not part of the duties of an ordinary library employee to teach people the Russian language, history, culture and law. And if so, then the amount of financing of the centers of tolerance, as they say, you want - you do not want, but you have to increase, because you can’t get very far from bare enthusiasm alone.

In this regard, a rather strange situation emerges. The average resident of Moscow, who is already forced to share workplaces with representatives of the migrant environment (and often share in such a case, when the migrant has a clear handicap - no need to pay taxes to the treasury), will face the need to also raise the education level from his own pocket. guests of the capital. " That is, the message is something like this: a Muscovite, do you want the migrant to be more educated and tolerant, pay a little more ...

But even if we assume that the same average Muscovite is ready to finance the initiative to create special centers of tolerance for migrants, how tangible is the return on the work of such centers? If we again refer to the words of the CBS representatives that the centers are visited by 40 migrants, the return at this stage is clearly not impressive. Why? Yes, if only because the total number of migrants in Moscow is by no means a 40 person and not even a 40 thousand. The real number is several millions! Therefore, even if we assume that the libraries of the Central Administrative District will produce only an educated contingent, then its volumes will be negligible compared to the total number of migrants in the same capital.

By the way, it is worth referring to the question of for which migrants in the Central Administrative District of the capital those very “tolerant centers” are now open. To put it mildly, the opening of a center for migrants from Belarus in the Veresaev Library causes a slight oddity ... At least, the opening of a tolerance center for migrants in the Central Administrative District causes attention, from Komi, Chuvashia and the Republic of Mordovia. Honestly, you can hardly imagine “intolerant” Belarusians who come to Moscow without knowing either the Russian language or our common history and in addition set their own rules, keeping entire Moscow neighborhoods at bay ... And shooting Chuvash weddings or, God forgive me, Has anyone seen “Mordovian lawlessness” on the streets of Moscow? .. Well, it's good that Moscow did not have time to open centers of tolerance for Voronezh, Belgorod or Khabarovsk people ...

So, there is an initiative to create special centers of tolerance, there are first ideas and plans, but in order for such a system to become a real, there is little enough of one enthusiastic librarians. It is necessary, at least, to highlight the main areas of work and attend to the influx of investment. In determining the main areas of work, it is necessary to single out those migrant groups (national and confessional) that today create more problems than others in society, and it is for them to place the main emphasis. Well, and these groups are well known to all: people from the Caucasus (including from the North), “guests” from Central Asia. To increase the efficiency of the centers, called centers of tolerance, it would be worthwhile to attract (and especially to finance) the diaspora. And then in the same Moscow, the national diasporas turned into tightly knit clans, the activities within which are almost a taboo for the “uninitiated.” Diasporas, if they position themselves as law-abiding structures, obviously should not stand aside from the development of centers in which the “listeners” will learn more about the legislation of the Russian Federation and the traditions of Russian (Russian) society. Funding for the centers of Islamic culture or centers for learning Arabic is enough, why not attend to the funding of centers for the study of Russian culture and the Russian language? ..

It would be nice to attract for financing and development centers and embassies of those states whose citizens in the capital, to put it mildly, a lot. So far, on a voluntary basis ... In such a multilateral manner, the work would have gone much better.

Ctrl Enter
Noticed oshЫbku Highlight text and press. Ctrl + Enter
We are
"Trouble" of the Promised Land. African immigration to IsraelMilitary Libraries: Glorious History and Modern “Life on the Edge”
61 comment
Information
Dear reader, to leave comments on the publication, you must to register.