Terminator on the way: in the United States began to test the humanoid robot "Atlas"

December 4 2013
43
A new humanoid robot "Atlas", which is considered a promising development, arrived for testing at the DARPA laboratory. The “Atlas” robot is a completely new generation of robotic technology, with capabilities that are very close to human, and even surpass them in some parameters. At the same time, the humanoid robot “Atlas” is not afraid of falls from a height - due to the presence of a durable “skeleton”. Protection of the robot can be enhanced through the use of special clothing and overhead panels.


Structurally, the robot "Atlas" repeats the person. He has two legs, two arms, a torso and a head. The robot turned out to be quite high, its height is 188 cm, its weight is about 150 kg, and the width of its shoulders is 0,76 m. For ensuring that this whole machine was put into action, 28 is responsible for fairly powerful hydraulic drives. For comparison: the Japanese humanoid robot HRP-4, which is designed to work next to a person, has much more modest dimensions, its height is about 150 cm, and its weight is just 39 kg. Power to the Atlas robot is still supplied via cable, since the mechanical part of the robot consumes a lot of electricity, not allowing the use of ordinary batteries.

The Atlas robot was created by the specialists of Boston Dynamics, who have extensive experience in creating modern samples of robotics. This is the same company whose specialists created a whole family of various four-legged robots: BigDog, Cheetah and LS3. The new humanoid robot company Boston Dynamics is equipped with an onboard computer, which is used to monitor the operation of the drives in real time. Inside his head is a very complex sensor system, which includes various cameras and a laser range finder. They provide the robot with a circular view. 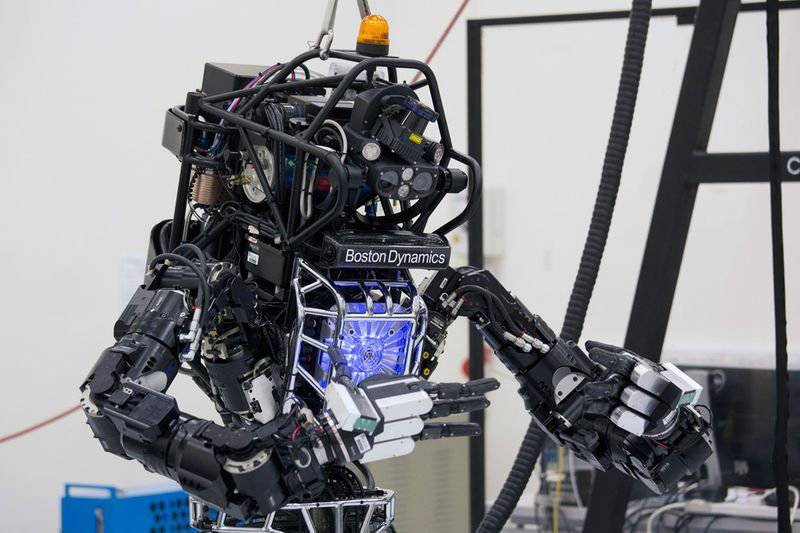 The main purpose of this robot should be work on the site of man-made and natural disasters. In such work, acting in the rubble or ruins, and it’s not easy for a person to move around, the robot has to go even harder. Naturally, when working in such conditions, the foot is much more convenient than a wheel drive, but even here there are some “pitfalls”. That is why American engineers installed quite complex systems at Atlas to maintain balance. When conducting preliminary tests, the robot was forced to move around difficult terrain, scattering small debris, various boards, and also coils of rope in its path. Also, untested stone fragments scattered on the ground were used during the tests.

During the tests, the robot was forced to stand on one leg and, working on its balancing system, they specifically pushed the 20-kilogram weight. In this case, the robot managed to maintain balance. In solving the problem of balancing the robot, engineers at Boston Dynamics have made good progress, but the main problem that must be solved is the lack of a power source. Engineers have yet to come up with such a portable and roomy source of energy that would satisfy the needs of the Atlas robot. Without such a source, it is tied to special power cables.

Already, "Atlas" is able to move well on 2's legs, climb and descend the stairs, jump off the ledges and bypass visible obstacles. The electronic “vestibular apparatus” of the robot helps it to maintain a good balance, even when hitting the body, and mechanical arms help the robot to balance. He can also lift them up in order to move in narrow, heavily littered aisles. Especially for the Atlas robot, the 2 type of arm manipulators was created, the use of which provides various functionalities depending on the type of work performed by the robot. 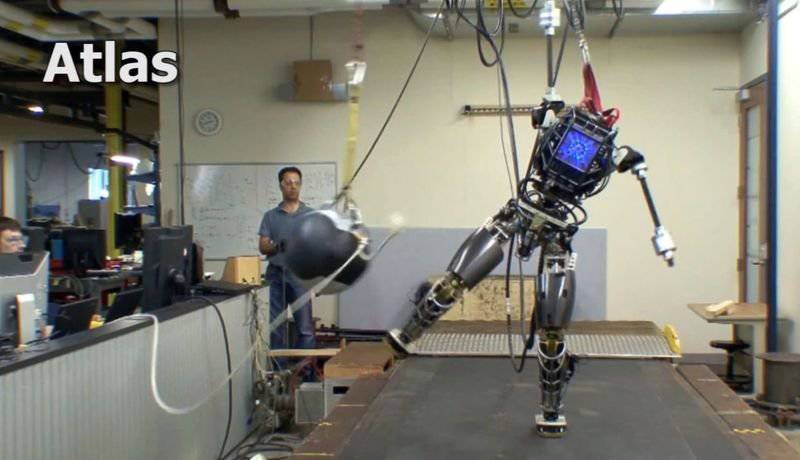 20 December 2013, the defense science agency DARPA, expects to conduct a review of all the latest models of robotics, which are designed to replace a person when working in deadly conditions. Testing will be held at the Robotics Challenge competition, within which it is planned to design and launch a robot that will be able to work independently in areas of natural and man-made disasters, for example, in forest fires, oil spills and accidents at nuclear power plants. According to the objectives of the competition, the robot must be able to move over rough terrain, including stairs, debris, as well as respond flexibly to changes in the environment. At the same time, although this is not explicitly mentioned, military funding for this program implies the use of a robot for military purposes. Initially, apparently, in logistics and as part of rescue emergency teams.

The robot company Boston Dynamics at the moment better than others meets the requirements of the agency DARPA. Previously, the robot has already demonstrated its ability to move along stairs, as well as other difficult obstacles, but in December the most difficult and interesting challenges await it. The test will be subjected to his advanced AI, which should ensure the maximum possible autonomy of his work.

Although Atlas is already one of the most advanced humanoid robots of those that were created, its creators plan in the near future to engage in the improvement of its hardware and software. One of the stages of these works was sending the robot to the IHMC institute, where he was “taught” to walk along the garbage scattered across the floor, complicating the task of disabling complex sensors. The published video from these tests shows that the robot sometimes stumbles. But in fairness it should be noted that not all people could ideally walk along the ropes, stones and bars of the tree blindfolded. Also, work is underway to improve the manipulators used by the robot. Thanks to them, the robot will be able not only to move better in space, but also to pick up various objects, to hold them in their hands. 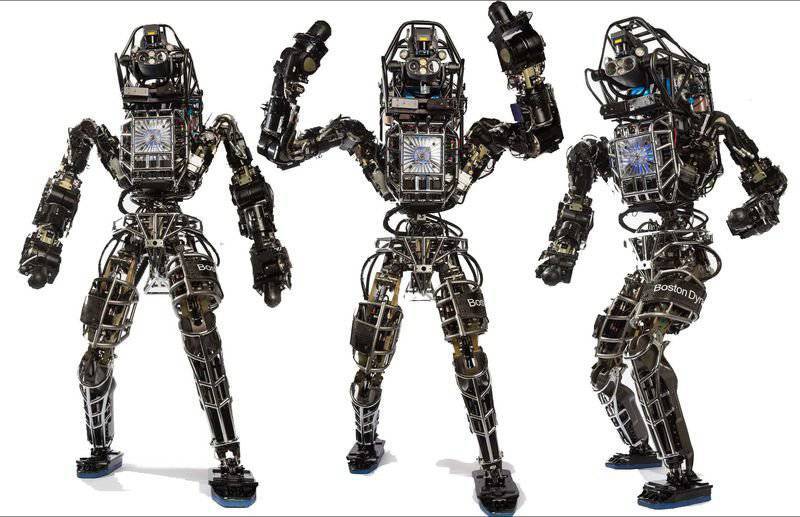 After the December tests, it will be clear if human-like robots are ready for service in emergency teams or not. At the same time, it is already clear that the Atlas robot has a high potential. It is much better man protected from various negative influences, and for some of them and completely invulnerable. For example, for poisonous substances and infections. Such robots could work for a long time in the most extreme conditions, and in the long run we can expect them to appear on the battlefield.

Ctrl Enter
Noticed oshЫbku Highlight text and press. Ctrl + Enter
We are
Giant leap in robotizationDARPA Report Overview
43 comments
Information
Dear reader, to leave comments on the publication, you must to register.