How John Kerry followed the advice of Hugo Chávez

December 4 2013
13
“The Monroe Doctrine must be broken,” comrade Chavez said in November 2008. Five years later, US Secretary of State John Kerry, in a speech at the Organization of American States, said that the United States was refusing doctrine. However, Mr. Kerry promised to continue to promote democracy and security in the Americas. And all progressive humanity knows perfectly well what it is and what it eats with. 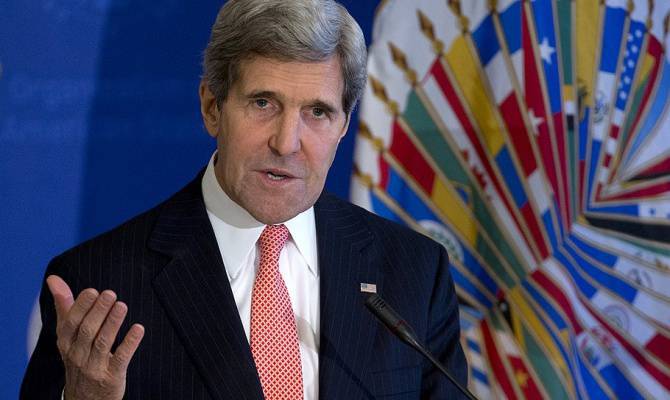 The Monroe Doctrine, whose author was not James Monroe, but Secretary of State John Quincy Adams, was proclaimed December 2 1823 in the annual presidential address to Congress. A clear principle was outlined in the presidential address: the world is now divided into the European and American systems of government; The United States does not interfere in the internal affairs of the European powers; the latter, in turn, do not interfere in the internal affairs of America.

Born the motto: "America for Americans."

The announcement of the “American system of government” unleashed the United States in its expansion against the peoples of South America. In the forties of the 19th century, the division of the world according to Monroe served as an excuse for joining the United States of a significant part of the Mexican territories, of which after the war the states of Texas, California, Arizona, Nevada, Utah, New Mexico, Colorado, and a piece of Wyoming were created.

In the 20th century, Washington with varying success extended doctrinal principles to Latin American countries, considering them to some extent as subjects of their “statehood”.

Philosopher and sociologist, member of the Academic Council of the Latin American Faculty of Social Sciences (Flacso) Emir Sader in the Mexican newspaper La Jornada, harshly criticizing American habits in the region, пишетthat the Monroe Doctrine was developed “in order to legitimize the numerous facts of direct and indirect interference by Washington in the affairs of Latin American countries under the pretext of facilitating the resolution of their internal conflicts”. The notorious "protection of the region from potential aggression by foreign powers," the author points out, "only contributed to the imposition of American hegemony there."

When Latin America decided to develop integration processes to solve its own problems, it actually buried the Monroe Doctrine and its offspring, the OAS. Due to the failed attempts of coup d'état in a number of countries with progressive governments, including Venezuela, Bolivia and Ecuador, as well as those that succeeded in Honduras and Paraguay, Latin America created its own conflict resolution mechanisms independent of the US (South American Defense Council) as well as the doctrine of solidarity, in accordance with which the governments that came to power as a result of a coup d'état and supported by the military are not recognized. ”

So, according to the scientist, reality has already buried the Monroe Doctrine, and Kerry made a statement after the fact.

It seems that Emir Sader hurried with the conclusions, and Mr. Kerry, guided by the very reality, just changed the sign. The hegemonic aspirations of the USA have not gone away, but the 21st century implies new formulations. As for examples, only the presidential elections in Honduras prove that Washington didn’t reject the doctrine that celebrated its 190 birthday. The White House protege won the election.

In 2009, the military overthrew President José Manuel Selayus in Honduras, who ruled the country since 2006. In 2013, 8 candidates claimed the presidency. There were two favorites of the election race: Juan Orlando Hernandez (the ruling "National Party") and Siomara Castro (daughter of ousted Jose Manuel Zelaya, opposition party "Freedom and Renewal").

Elections were held on November 24. Both leading candidates on the same day hurried to publicly declare their victory. Hernandez operated on the preliminary results of the vote, and Siomara Castro referred to the exit results.

But judging by the final results of the vote, which appeared in the December 3 press, the candidate of the “National Party” won, after counting almost 99% of the votes, he received the 36,8% of votes. Siomara Castro scored only 28,8%.

She has already announced large-scale violations and fraud during the voting and counting of votes. The Freedom and Renewal Party did not recognize the official results of the counting and announced a series of falsifications and violations found at the 12% of polling stations.

According to various data promulgated in Latin American and Russian media, the opposition operates with large numbers characterizing manipulation of votes. According to some sources, more than 800 thousands of votes were manipulated, while on others, 400 thousands of ballots were fabricated. The opposition party promised to bring people to the streets with mass protests. Experts speak even about a million voices flowing to Hernandez - not without good help from the State Department, of course.

By the way, Mr. Hernandez supported the military coup in 2009, which ended with the overthrow of President Zelaya.

According to the Venezuelan political scientist, Professor Miguel Angel Guaglianone, led by Sergei Douz ("Voice of Russia"), the main principle of the Monroe doctrine is not “America for Americans”, but “All America for the USA”. Washington has always viewed Latin America as its backyard, or rather, a raw materials appendage. The professor emphasizes:

“The statement of John Kerry, as well as the speeches of his other influential compatriots, should be treated with great caution. As a rule, American politicians say one thing and do something completely different. What end of the "Monroe doctrine" can we talk about after the recent elections in Honduras - outrageous in its organization and in the number of violations? How hard the United States was able to ensure victory for his protege Juan Orlando Hernandez! According to the opposition, thanks to Washington's "election specialists", about a million votes targeted to left-wing candidate Siomare Castro went to her opponent.

Provocations by the White House and against Venezuela do not cease. Kerry’s statement should not be viewed as a desire of the United States to change its policy towards Latin America. With his speech, he is trying to restore to Washington prestige, lost in the light of recent diplomatic defeats and international scandals. As for the "Monroe Doctrine," then there can be no question of abolishing this policy. Moreover, we should expect increased pressure by the United States of its southern neighbors. "

It seems that the Venezuelan scientist is absolutely right.

Speaking at the OAS summit, John Kerry said that from now on Washington would not take care of the countries of Latin America and promised to treat them as equal partners. “We do not have to follow the doctrine, but the decisions that we take as partners to achieve the goals and protect the values ​​that we share,” said Kerry.

What are the values ​​shared by the White House? According to the Secretary of State, this is the development of education, security, the solution of climate problems, support for democracy.

If we get rid of "water", then in the bottom line we have the same thing that we had before: "ensuring security" and "supporting democracy".

However, Kerry himself let it slip further. After declaring the death of the Monroe Doctrine, he did not say a word about Honduras (and there, by the way, 70% of the population are beggars), but he harshly criticized not sufficiently democratic Venezuela: they say, democratic institutions work poorly there, and Comrade Maduro recently received even special powers. Kerry probably wants Venezuela, where the president is fighting crime and speculation, to become as impoverished as Honduras. But Nicolas Maduro is not going to hand over the legacy of “Furious” to the capitalists. He remembers that Chavez’s supporters chose him, and he remembers that he was bequeathed to Comandante. And Mr. Kerry is also angry because the United States buys up to 15% of oil from Venezuela.

The head of the State Department and Cuba criticized: it’s also bad with democratic reforms.

In Honduras, everything is obviously fine.

“At the moment, the most important task for the US law enforcement agencies is to maintain control over Honduras, which is called the“ unsinkable US aircraft carrier ”in Central America. US military bases are already located on the territory of Honduras, but the Pentagon plans to build new ones - aviation and marine. Washington's cynical interference in the recently concluded election campaign in Honduras is another signal of the White House to Latin America: we will ensure our interests at any cost, otherwise we are not happy. "

The analyst recalls that Lisa Kubiske (US ambassador) actively intervened in the electoral process in Honduras.

These are the "equal partners". Washington still, under the guise of demagogy, cynically uses its "partners" precisely for what Kerry said - "to achieve the goals and protect the values ​​that we share." True, many Latin American countries do not at all share the imperialist "values" and even more so the "goals" that the Secretary of State, who had recently become famous for his explanations on the subject of American "exclusivity", hinted at them transparently.

Ctrl Enter
Noticed oshЫbku Highlight text and press. Ctrl + Enter
We are
"Rebellious Venezuelan Aviation." In memory of the commandant Hugo Chavez is dedicatedThe loss of Venezuela has become a loss for Syria
13 comments
Information
Dear reader, to leave comments on the publication, you must to register.