BMP or BTR - that is the question. The US Army is preparing to transfer to a new armored vehicle.

December 6 2013
25
US forces are considered the strongest army on the planet. At the same time, they still use some equipment developed even before the outbreak of the war in Vietnam (1965 – 1974). The question of the need to replace it today is very relevant for the Pentagon. Even in the rich US, cost is a significant factor. There is a choice between an expensive CGV infantry fighting vehicle and an armored personnel carrier cheaper AMPV.


In early 1956, the U.S. Armed Forces began developing the M-113 - a multi-purpose armored personnel carrier (BTR) for armored and mechanized units. It was assumed that he could swim and he could be transported by military transport aircraft aviation (BTA). Production of the M-113 began in 1960. The first armed conflict in which the APC took part was the Vietnam War (1965–1974), during which he earned positive reviews from the military due to its reliability and wide tactical capabilities. 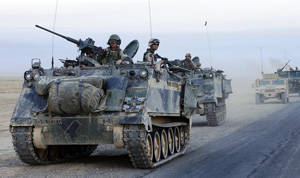 In addition to the basic version, the M-1068 command and control vehicle (KSHM), M-1064A3 and M-106A2 self-propelled mortars (CM) (equipped with 120-mm and 81-mm mortars, respectively), armored repair and recovery vehicle (BREM) M were produced. 579 and M-113 AMEV (Armored Medical Evacuation Vehicle) and M-577 medical armored vehicles. This list includes not all modifications of the M-113 BTR - for all history his service only in the American army there are more than 40.

In 80, the US Army began replacing a significant number of M-113 armored personnel carriers with a Bradley infantry fighting vehicle (BMP). Despite the fact that most of the basic versions of the M-113 were withdrawn from the active army, there are about three thousand units in the ranks, mostly auxiliary vehicles such as medical BTR, SM and KSHM. In parts located in Iraq and Afghanistan, sometimes there are also separate instances of the basic version of M-113.

At the start of the 2000, the US military revealed the main problems of the tested armored personnel carrier. Basically, this is an insufficient level of its security in the conditions of modern combat in the theater of military operations (theater of operations). For example, some commanders who used this technique noted that in order to effectively accomplish the task at the advanced operational bases, M-113 had to be equipped with additional mounted armor plates and engineering equipment for various purposes to clear minefields. This seriously worsened the maneuverability of the BTR. At the same time, the army command repeatedly noted that the use of other lightly armored vehicles to carry out M-113 tasks (for example, in evacuating the wounded) significantly reduced their effectiveness. So on the agenda was the question of replacing the entire family of armored vehicles.

Currently, M-113 continue to serve. In particular, in the heavy brigade combat group (Heavy Brigade Combat Team), the 114 of these BTRs of the following modifications are used (Table 1).

In March, the 2012 US Department of Defense approved the start of work on the creation of an armored personnel carrier, which would completely replace the M-113. The program was called the “armored multi-purpose vehicle” - AMPV (Armored Multi-Purpose Vehicle). By July of the same year, the army completed a preliminary study of the project and concluded that a ready-made vehicle was required. Allowed the option to purchase AMPV with minimal modifications. As a result, the Pentagon’s representatives responsible for the program missed the phase of the technical design of the sample and moved on to the pre-production phase. 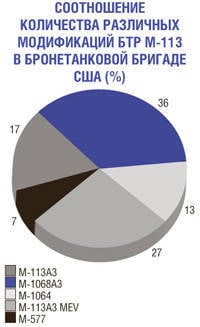 It was originally planned that the contract for the supply of a month 42 will be transferred to one manufacturer. Its estimated cost is 1,46 billion dollars. 388 of millions of them were intended for the production of 29 AMPV for testing in the period of 2014 – 2017 of financial years, another 1,08 of billion - for the purchase of 289 machines of the head lot in 2018 – 2020. It was expected that the competition will begin in July 2013. The average cost of one AMPV is about 1,8 million dollars, it was supposed to buy 2897 units. That is, the total cost of the program is close to five billion dollars.

However, in October 2013, the project made significant changes. The process of selecting the winner of the competition was postponed to May 2014, and the contract duration was extended to 60 months. The estimated cost of 29 testing machines increased to 458 millions, the dates shifted to 2015 – 2019 years. Expenses for the production of the first 289 machines in 2020 – 2022 also increased. In the first year, the Pentagon will spend 244 million, in the second - 479, in the third - 505. The total cost of the new armored vehicles is 1,68 billion or 220 million more than originally planned.

According to representatives of the Ministry of Defense, the estimated cost of one mile (1,6 km) of movement has changed compared to the M-113 BTR, in which it was equal to 58 dollars. The same indicator for the new machine will be 90 dollars. At 2014, the congress approved the AMPV allocations in the amount of 116,298 million dollars.

Now there is no estimated distribution by type. The Pentagon has not yet published accurate data on how many and in what quantity AMPV modifications will be produced. Nevertheless, the corresponding predictions about the future production of the new armored vehicle can be made on the basis of a known number of M-113 armored personnel carriers and their distribution among the modifications presented in the 2 table.

Complete replacement of the outdated M-113 is assumed. After the start of AMPV serial production, the Ministry of Defense plans to re-equip them with two or three brigades within one financial year. After the changes made to the program, the rate of retrofitting with new machines is not specified.

The question remains who will take part in the tender for the supply of AMPV. According to experts, the most likely participation in it is the company BAE Systems (BAE Systems). Supposedly she will present a modification of the BMP "Bradley" without a tower combat module. The tender also awaits General Dynamics Land Systems (General Dynamics Land Systems), which is preparing a tracked or wheeled version of the Stryker BTR with a W-shaped bottom. A number of analysts believe that the application for participation in the auction can be filed by the company Navistar (Navistar) with a machine model protected from the impact of mines and improvised explosive devices - MRAP (Mine-Resistant Ambush-Protected) "MaxPro" (MaxxPro). But the chances of winning this company are small, as she had previously refused to remake her car under the tracked chassis, citing positive experience in combat use of the wheeled structure. So most likely the main struggle will unfold between BAE Systems and General Dynamics Earth Systems. It’s too early for anyone to talk about preferences. 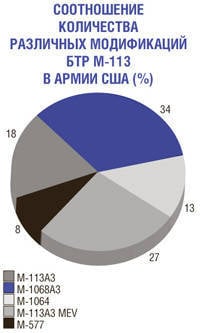 In the manual of the Pentagon there are serious disputes, which of the programs should become a priority - the AMPV BTR or the BMP of the new generation CGV (Combat Ground Vehicle). At present, it is on the CGV concept that the program for the modernization of heavy and mechanized brigades of the US Army is being built. The AMPV program is relegated to the background. However, opponents of the BMP have serious arguments. First, it is a high cost - 37,923 billion dollars per program. Secondly, the unsatisfactory pace of retrofitting heavy brigades. In all, the state has 346 armored vehicles in these units, including Bradley 61, that is, less than one-fifth. So, with the adoption of the CGV, the fleet of armored vehicles of the brigade will be updated less than if you replace the 114 M-113 armored personnel carriers. Experts also criticize the Pentagon’s intention to fund the project on such a large scale, since the total number of heavy brigades at the end of 2012 was about a third of the total number of US Army units.

There is another argument. "Bradley" is in service much less M-113, which is more than 50 years, so it is more logical to replace the older type of armored vehicles. Experts also note that the requirements that the engineers followed when designing the M-113 after the Korean War (1950 – 1953) are now significantly outdated, and the modernization of these armored personnel carriers has ceased in the 2007 year. Therefore, in 2013, the average age of one M-113 is 14 or more. AMPV is also supported by the fact that this project does not imply research and development of a completely new prototype, since a modification will be chosen from one of the vehicles already in service. This factor can also serve as a reason for changing priorities when choosing the main project of a new armored vehicle for retrofitting the US Army.

Under the conditions of the constant reduction of the US military budget, the Ministry of Defense regards the CGV programs and the armored car of the JLTV special forces (instead of the famous Hammer) as one of the last opportunities to achieve large allocations for the purchase of armored vehicles. But the high cost of the BMP can lead to the fact that the program is significantly reduced or even terminated.

Ctrl Enter
Noticed oshЫbku Highlight text and press. Ctrl + Enter
We are
Overview of armored transporters and infantry fighting vehicles (Part of 1)Is the "old" well forgotten to become the "new"? Part-2. At the call of honor and duty
25 comments
Information
Dear reader, to leave comments on the publication, you must to register.