Do the Chinese want children?

December 5 2013
23
From 9 to 12 in November 2013, the third plenum of the Central Committee of the Communist Party was held in China. The plenary session made one of the key decisions, which will undoubtedly affect Chinese demography. The party decided to change the birth control policy in the country: from now on, couples can have not one, but two children, - provided that at least one of the spouses was the only child of their parents. 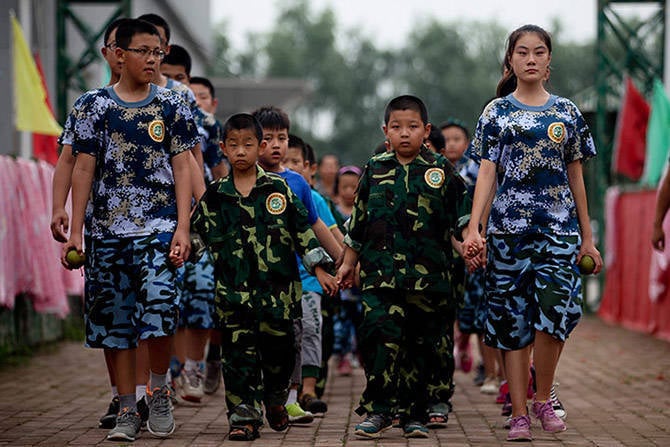 Military summer camp, opened in the suburbs of Beijing in 2008 year. The average child in the camp is a “little emperor”: a boy with parental over-care, without brothers and sisters because of the policy “one family - one child” who most likely does not know how to make the bed. Many parents hope that the taste of military life and strict discipline will strengthen the character of their child.

The Plenum meeting is quoted by Xinhua: “China will pursue a new policy, adhering to the general principles of state family planning policy. The birth control policy will be refined and improved step by step with a view to the long-term balanced development of China’s population. ”

Words about long-term balanced development, about refinement and improvement are not empty statements and they appeared not from scratch. The base for them already exists. A few years ago, the Chinese authorities allowed citizens to have a second child, but only for families in which both parents are the only children. Permission for two children was given to families living in rural areas, provided that their first child is a girl. The last is easy to understand: in China, girls do not like to give birth to girls, the main breadwinner of the family is a man. Therefore, many Chinese women prefer abortions until they become pregnant as a boy. The result of these abortions gave rise to an unnatural imbalance: the Chinese 2011 census of the year showed that there are about 20% more boys born than girls.

In 2008, parents of children who died or were injured in the Sichuan earthquake were allowed by the authorities to have another child.

China's state birth-rate reduction policy begins in 1956. The first birth planning campaign in the country lasted about two years and had almost no effect.

In 1962, the second birth planning campaign was launched, which lasted until 1966. Its components: late marriages, lengthening the intervals between births and reducing family size. Due to the short duration, the effect was more than modest.

The true fact of the birth control policy in the People's Republic of China started talking to 1971, when Comrade Mao Zedong delivered a report on the development of work on the so-called “planned childbirth”.

Thus, in 2011, exactly forty years ago, the emergence of a state family planning policy emerged.

Today, politics is changing for an understandable reason: due to the aging of the inhabitants. Economically active population is rapidly decreasing. In the recent past, the Celestial Empire relied on its relatively young workers: the number of able-bodied Chinese people under the age of 65 grew from 1980 to 1990. by two percent. At the same time, a country that has become a global market for production rose economically.

However, in the second decade of the 21st century, the growth of these “young” workers turned out to be zero and now threatens to go into a short and then a long minus. Along with the rise in the cost of labor in the Middle Kingdom, this break in demographics can be fatal for Beijing. In addition, as the number of old people grows, the pension system can stagger: analysts doubt that it will withstand the load.

Open data published in the media is formed into simple arithmetic: the population of China today is 1,34 billion people, and the number of old people (starting from 60 years) is 194 million people. According to forecasts, by 2020, the number of older people will be 243 to millions, and by 2050, it will exceed 280, or even 300 millions.

Mao Qun'an, a representative of the State Committee on Health and Planned Childbirth of China, said over the past four decades that the policy of planned childbearing in China has reduced China’s population by about 400 million. According to him, who were quoted by the Xinhua agency, the birth rate in the PRC declined from 33,4 ppm in 1970 to 12,1 ppm in 2012, and natural population growth went from 25,8 ppm in 1970 to 4,95 ppm in 2012.

The slowdown in population growth has weakened human influence on the environment and somewhat solved the problem of lack of resources, which contributed to economic development, comrade Mao Qunan said.

He also stressed that the policy of planned childbirth for five years delayed the day when an 7 billionth resident would be born on the planet. Comrade Mao Qunan pointed out Chinese birth control policies as a role model for developing countries.

Sample? .. These victorious reports are hardly appreciated by the Chinese. With the reform of regulatory policy, the government remembered too late. The Chinese no longer want to have two children. At least those of them who were lucky enough to enter the middle class.

“We have one child, the second will not be. Two children, of course, well, but this requires conditions, and we are not so rich. There would be one to provide all the necessary "- declares young chinese woman

And here are the statistics of the dating service. According to the weekly Nanfang Zhoumo, only about a quarter of those who want to find a husband or wife expect to meet a partner who would not have brothers and sisters, that is, a person with whom you can now have two children.

All this is not surprising. With increasing wealth, fertility is steadily declining. This is the case in the USA, the countries of Western Europe and in the post-reform years in Russia, which in the boom of unrestrained consumption imitates the same West. On the "Military Review" has already been reported that the Europeans consider the "investment" in children unprofitable business. Therefore, many couples either have an only child, or do not have children at all. The reason for the decline in fertility is not at all in the economic crisis, but in the growth of egoism and extreme individualism. A person prefers to spend money on himself, on his pleasures, and not on children.

Exactly the same trends are observed in modern China. In addition, putting on their feet and forming an only child in Beijing will cost parents more than two million yuan. To accumulate so much money, the Chinese family with an average income will not have to eat or drink for twenty-three years, says Vesti correspondent Dmitry Sobiev.

As for the "extra" children, then for them today in the PRC ruthlessly fined. For huge amounts. Here is the newest example.

Famous director Jan Umou told the press that he has "extra" children. The director publicly announced that he was ready to pay a fine to the state for his daughter and two sons. The media writes that Jan Umou will have to part with several million dollars. The “yellowing” editions convince their readers that this is almost thirty million and that the Chinese director has not three, but seven offspring.

In conclusion, it should be noted that changes in the fertility planning policy are related to the mood of the Chinese authorities on the growth of domestic consumption - this was also noted at the plenum of the CPC Central Committee. With the huge population of the country and the global financial crisis, when demand for Chinese goods is falling, this is a very topical issue.

“The actual legitimization of the second child in young urban families can lead to the emergence of another 15 million children in China only in the year 2014. In addition to the positive long-term effect, it will be another incentive for the growth of domestic consumption ", - says Stanley Chang, a professor at the University of Hong Kong.

Ctrl Enter
Noticed oshЫbku Highlight text and press. Ctrl + Enter
We are
Family policy of Russia. Without a healthy family there will be no strong stateChina: old people, children and the national dream
23 comments
Information
Dear reader, to leave comments on the publication, you must to register.