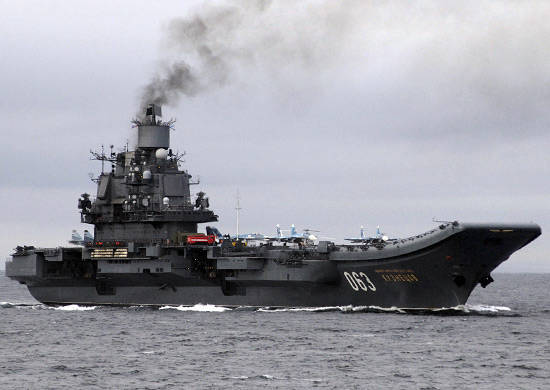 A series of long voyages of ships of the North fleet in the new academic year it will open the way to the sea for a naval aircraft carrier group led by the heavy aircraft-carrying cruiser Admiral of the Fleet of the Soviet Union Kuznetsov. According to representatives of the fleet command, the training of crews of ships and vessels that will be part of it is currently nearing completion.


Today, far from the native coast, the crew of the Russian Navy in the Mediterranean successfully manages the tasks of the crew of the Peter the Great heavy nuclear missile cruiser, the large landing ship of St. George and the Altai tugboat.

The heavy aircraft-carrying cruiser "Admiral of the Fleet of the Soviet Union Kuznetsov" made six long-distance cruises to the regions of the Atlantic Ocean and the Mediterranean Sea. Since February, 2012, his crew did not perform similar tasks.

Ctrl Enter
Noticed oshЫbku Highlight text and press. Ctrl + Enter
We are
Centenary Rescue Ship "Commune"
42 comments
Information
Dear reader, to leave comments on the publication, you must to register.