Defilers of shrines and merchants of organs 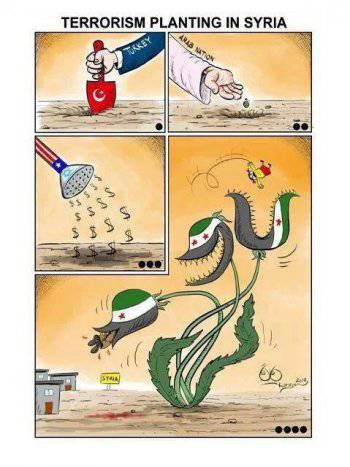 29 in November, near the western entrance to the famous Umayyad Mosque in Damascus, a mortar round fired by bandits exploded. It is one of the crowded places in the Old Town. 4 people, including a woman and a child, died, 26 were injured, among them - children.


On the same day, nine employees of the electricians' repair brigade were kidnapped in the city of Homs, who repaired high-voltage lines previously damaged by terrorists. In Homs, terrorists killed three employees of the repair brigade of the General Directorate of Electric Power. Law enforcement officers were able to release six of them, but three of the bandit captives did not return.

The next day, the Umayyad Mosque in Damascus was visited by representatives of Christian denominations. This is another evidence that in Syria, since ancient times, both Christians and Muslims lived together, showing no enmity towards each other, until the forces of the West and its allies - Saudi Arabia and Qatar - were not artificially sown.

Moreover, the Umayyad Mosque is an outstanding monument storieswhich is a shrine for both Muslims and Christians. Inside the mosque is the tomb of John the Baptist, whom Muslims call the Prophet Yahya.

The Christian leaders who visited the mosque wished the world to return as soon as possible to the Syrian land, which is the cradle of civilization and where Christianity and Islam came from.

The terrorists also “distinguished themselves” with a new crime against the monuments and sights of Syria. They destroyed seven Sufi tombs in the north of the country, in the city of El-Bab in the province of Aleppo. Spread the corresponding video on the Internet, where they boast of such a "feat." Demonstratively pronounced on the camera that the tombs are broken because "they contradict the principles of Islam." By doing this act, they destroyed "the graves that idolized instead of Allah."

Earlier, in mid-October, extremist militants in 45 km from the city of Deir-ez-Zor blew up the tomb of Sheikh Issa Abd al-Kadyr Rifayi, whom the Sufis worship as a saint. From it remained only a pile of stones. The Shiite mosque of Seid Zeinab in the province of Damascus, the Umayyad Grand Mosque in Aleppo are two major Muslim shrines that are constantly under attack from those who assume the right to broadcast on behalf of God ...
The barbarities of the so-called “armed opposition” are far from being limited to shrines and sights.

A year later, the details of the terrorist attack committed last November in the city of Jaraman became known. Then, as a result of strong explosions of two mined cars, about 28 people died.

Currently, one of the perpetrators of the attack, Khaled Ismail Alvisi, was arrested by the police. This 23-year-old criminal has confessed on Syrian television.

At the time of the beginning of the Syrian crisis, he studied at the pedagogical faculty of Damascus University. But when the “Arab spring” began, he got into the company of extremists, who first convinced him to go to anti-state demonstrations, and then began to talk about the need for so-called “jihad”. He was promised paradise and gurias in it, as well as quite earthly material rewards.

28 November 2012, the terrorists arrived in Jaramana in two cars with explosive devices. At the entrance to the city they were divided. One of the cars in which there was a remote-controlled bomb and a large amount of explosives drove to the central square. The terrorist left her, then returned to his accomplices and detonated an explosive device. Then, in the second car, they drove to the scene of the explosion. There soon were gathered people who were looking for relatives, ambulance brigades, firefighters ... Accomplices ordered Khaled to find a car in which a group of intruders would run away. Taking advantage of the turmoil, he hijacked one of the cars. The same car that the terrorists arrived on was left in the square - it also had an explosive device with a remote control. Then the gangsters, having driven away on a stolen car, brought that “hellish car” into action ... As a result, there are so many victims and tragedies ...

In addition, two more terrorists were shown on television, who confessed to terrible atrocities.

One of them, a certain Rasul Mahmud Zakariya, a native of Homs province, told that he had killed civilians. Their bodies were taken to the militants' “field hospital”. There worked the so-called "doctor" Muhammad, who cut organs from bodies and put them in mini-refrigerators. Then Zakaria drove these bodies to the village of Erich in the province of Idleb, where he received money for them from other terrorists. The offender added that he participated in such shipments 10 times. As for this pseudovrach, he was repeatedly shown on Al-Jazeera and other propaganda TV channels, where he called on the world community to help the "poor rebels."

Another terrorist, Ibrahim Muhammad al-Jamus, said that before the dramatic events unfolding in the country, he worked as a driver. With the beginning of the riots, he began to carry bandits weapon and ammunition from Turkey to the city of Al-Ksayr, to the area of ​​the Old City of Homs, to the village of Telbis. Once the leader of the group to which he joined, ordered him to go to Turkey. There he was assigned to drive a car with a cargo that was “a lot of green cans”. Then, after delivering the cargo to Telbisu, Ad-Jamus and his other accomplices poured substances into other containers, while everyone who participated in this was given out gas masks. These substances were transferred to a handicraft workshop for the manufacture of home-made rockets.

Even the confessions of these three terrorists should have been enough for the world community to initiate an investigation of these facts. Guilty of such terrible crimes - and performers, and the organizers, and the instigators - should not sit at the conference "Geneva-2" and not at meetings of the "Friends of Syria" ...

And in Jaramana, a mourning rally was held in honor of those who died in that terrible terrorist attack a year ago. Thousands of residents lit candles. A memorial plaque was installed with the names of the innocent victims ...

Ctrl Enter
Noticed oshЫbku Highlight text and press. Ctrl + Enter
We are
Iran in the Syrian conflict. The confrontation with Saudi Arabia and the interests of the ShiitesAir Force and Saudi Arabia
25 comments
Information
Dear reader, to leave comments on the publication, you must to register.