December 3 2013
73
In modern realities, the role of large-caliber (heavy) machine guns in armed conflicts is increasing, which determines their development and production in Russia, the USA, Great Britain, Belgium and other countries of the world. At the same time, an analysis of the technical characteristics of Russian large-caliber machine guns in comparison with the widely-spread and most well-known foreign counterparts shows that, in terms of the rate of fire, their weight and size characteristics and reliability of the automation, Russian machine guns are superior to foreign ones. First of all, we are talking about the newest large-caliber machine gun "Kord".

The gunners of the ZID plant in a short time were able to create an 12,7-mm machine gun, which was designed to meet all modern realities and was eventually adopted by the Russian army as part of a number of unified models under the designation "Kord". Machine gun "cord" is automatic weapon, having tape feed (feed cartridges can be carried out both on the right and on the left side). The barrel of the machine gun has air cooling and is quick-change, it provides uniform heating of the barrel when firing, and hence its uniform thermal expansion (deformation). Due to this, it was possible to improve the accuracy of shooting compared to the large-caliber machine gun "Rock" in 1,5-2 times. The Kord machine gun is designed to destroy fire weapons and lightly armored targets, as well as enemy infantry at a distance of 1,5-2 kilometers, as well as combat air targets at slant distances of 1,5 kilometers. 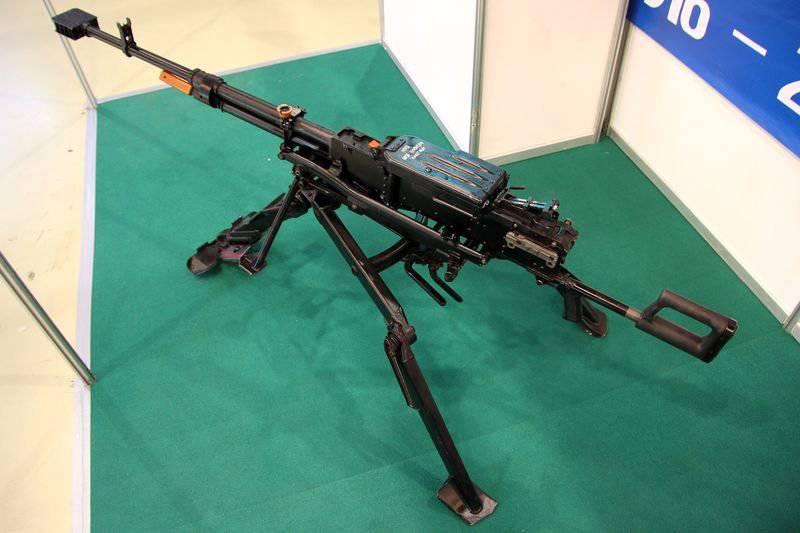 At the heart of the design of the machine gun "Kord" is the venting automatic. The barrel is locked with a wedge gate. The trigger mechanism has a fuse from the production of random shots and can be controlled both in manual mode (from the trigger, which is installed on the machine), and from electric release (in the tank version of the machine gun).

It is worth noting that the large-caliber machine gun "Kord" is the first in the world, which allows firing from a bipod, and, if necessary, even with the hands of an arrow. Today it is the easiest among all full-fledged 12,7-mm machine guns. For example, the American Browning M2 Heavy Barrel machine gun of the same caliber, mounted on a tripod machine, weighs 58 kg, while even the body of the American machine gun weighs 38 kg, which is almost 20% more than the weight of the Russian bipod. Another American machine gun, XM312, although it weighs less than the Kord, but cannot be considered its full-fledged counterpart because of its very low rate of fire — only 260 rds / min (207,84 g / s versus 520 g / sec for Kord ). The weight characteristics of the modern Russian 12,7-mm machine gun make it possible to raise the question of replacing the Kalashnikov machine gun in the platoon level, especially considering that another domestic machine gun, the Pecheneg, 7,62-caliber, weighs only 8,2 kg on bipods, which allows them to equip them with small branch instead of RPK-74 or RPK.

At the same time, a new large-caliber machine gun is able to conduct effective fire from both trained and unprepared fire, moving and stationary vehicles, buildings and structures in any position of the fighter. At the same time, the relatively small weight of the entire complex, as well as the available ability to quickly transfer a machine gun from a marching to a combat position, allows the crew to easily change their firing position. That, in turn, increases the survivability of the calculation, as well as the effectiveness and suddenness of the impact on the enemy. An important and quite attractive feature of the Kord for the Russian Armed Forces is the similarity of its docking and mass-dimensional characteristics with the Utes machine gun, which allows replacing the latter in all existing complexes without performing any additional maintenance. 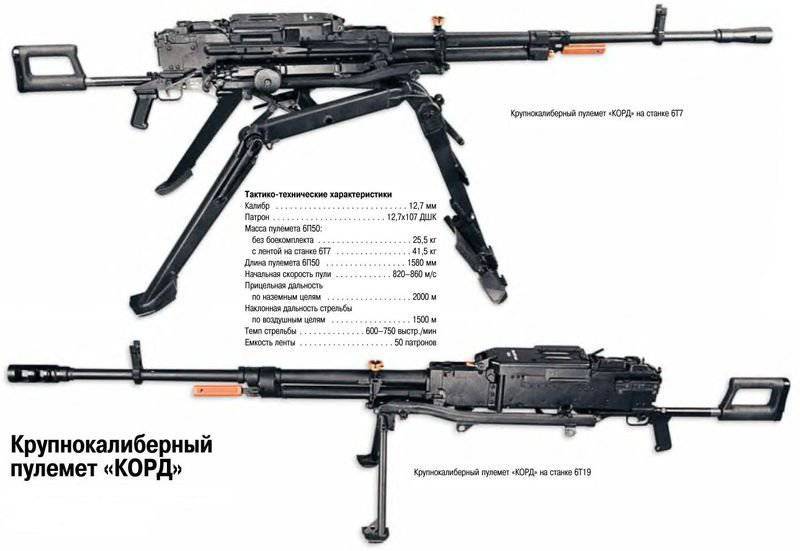 When creating a new machine gun, the gunsmith designers from Kovrov succeeded in successfully solving 3 important design problems:
- they were able to reduce the recoil energy and increase the stability of the machine gun, which made it possible to create an infantry version of the machine gun "Kord", which is installed on the bipod;
- to ensure the process of independence of the actions of the mechanisms of the barrel and automation, which eliminates the resonant oscillations of the weapon and has a positive effect on the accuracy of shooting;
- significantly increase the survivability of the barrel of the machine gun, which for the first time allowed the automatic weapon of such a large caliber to be equipped with a single barrel.

An analysis by specialists of the use of large-caliber machine guns in modern combat operations has demonstrated that, when used in infantry combat formations, the weight of the machine gun cannot exceed 40 kg. In addition, the need to create a single large-caliber 12,7-mm machine gun, which would be used both on armored vehicles, cars and helicopters, and after being removed from them, could be used directly in the combat formations of the infantry. At the same time, all existing infantry complexes of such caliber had a number of significant drawbacks that impede such use. The main one, of course, was a significant weight, which limited the mobility of the soldiers, as well as the insufficient stability of the accuracy characteristics of the weapon. 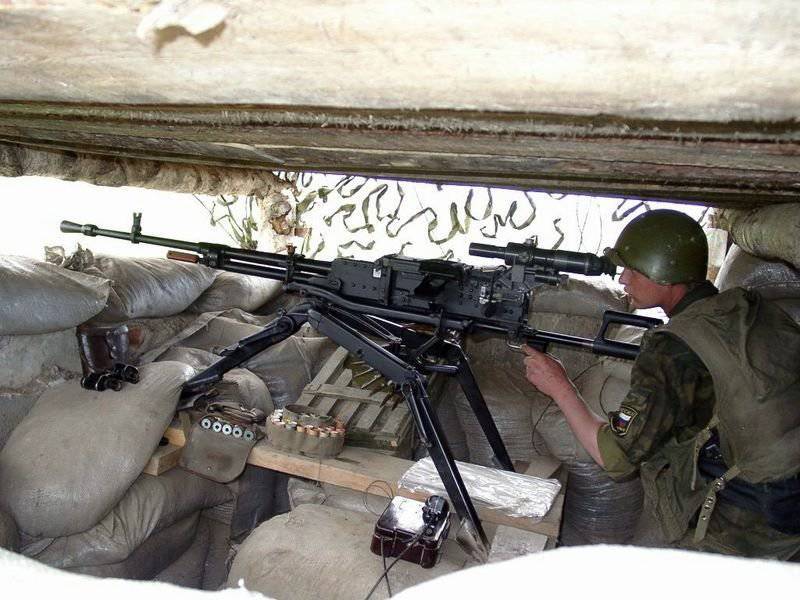 It was to eliminate all the above disadvantages and expand the capabilities of combat use was created and promoted as a single unified large-caliber 12,7-mm machine gun "Kord" on the bipod (6P50-1), which can be mounted on military equipment and a variety of machines, as well as used as a manual.

A very high level of technical solutions implemented in the machine gun provided Korda with universal operational and combat qualities. The Russian machine gun differs from its direct analogues:
- reliability of work and the ability to conduct a fairly intense fire without additional cooling of the barrel of the machine gun while maintaining aiming accuracy;
- high level of reliability at ambient air temperature from –50 to + 50 degrees Celsius, after immersion in water, in dusty conditions, without lubrication and cleaning for many days, during icing and in other extreme operating conditions;
- stability of the rate of fire and accuracy of the battle, accuracy of the entire technical resource exploitation;
- convenience of service. 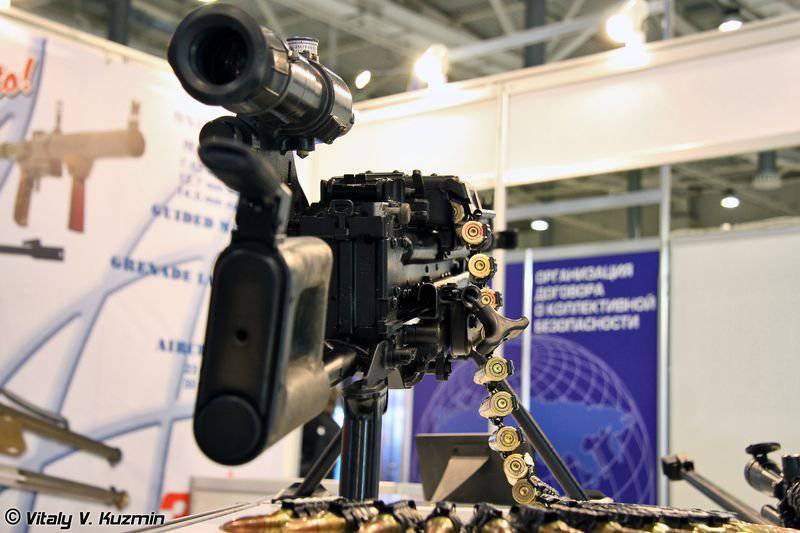 Complete with stand and machine-gun installation "Kord" with bipods can be mounted on any armored or automotive equipment, boats, railway platforms, ships, helicopters. In the case of placing a machine gun on an object, its design allows mounting the cartridge box on the swinging part of the installation, collecting tape links, spent cartridges or their reflection (down-to the right or forward), fix the machine gun in the “traveling” mode, quickly shift the machine gun relative to the installation for placement inside the carrier of the door, hatch and so on.

Today, a version of the Kord machine gun has also been created, which can use the widely used NATO ammunition model 12,7x99-mm (Russian cartridge 12,7х108-mm). The production of these cartridges today is engaged in the 22 state. Operational and technical characteristics of this version of the machine gun are similar to the basic version with structural differences between the feed mechanism and the barrel.

In modern realities, the single Kord heavy machine gun, used in conjunction with the AGN-30 30-mm automatic grenade launcher, as well as the new 12,7-mm sniper rifle, the Kornet-E ATGM and the Igla-S MANPADS ideally fit into the concept weapons of mobile units of special forces. 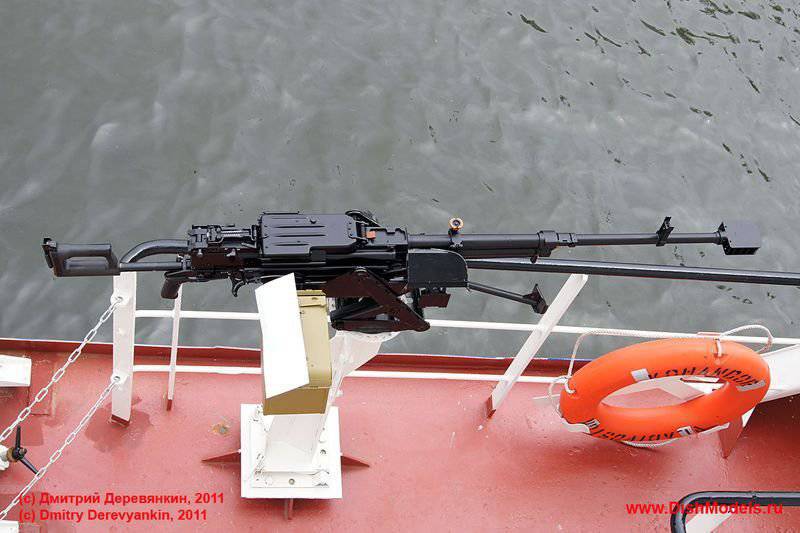