December 3 2013
355
After the unsuccessful dispersal of “Euromaidan” - both from the strategic and tactical side, on the night of Saturday “Berkut” managed to fully amnesty itself while repelling hooligan attacks on the building of the presidential administration. 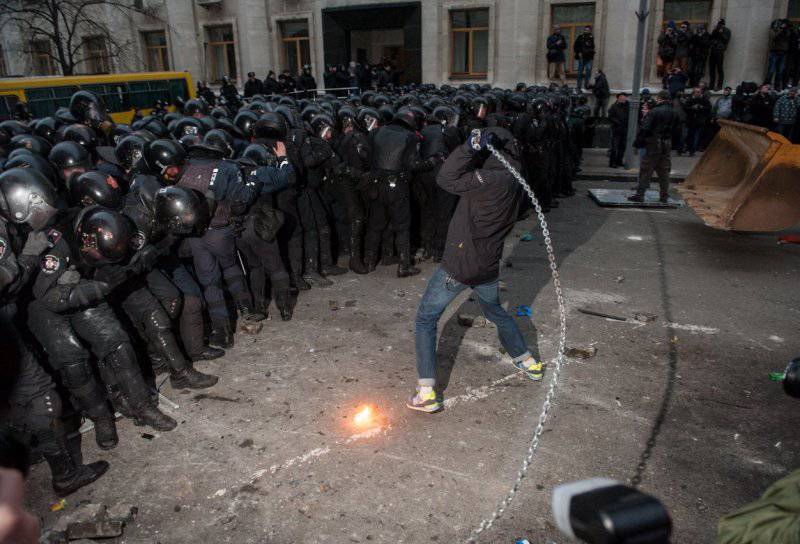 In the case of "Euromaidan" - yes, we are talking about exceeding official authority. Although, on the other hand, what is the right of the protesters to arrange unauthorized rallies and at the same time repair the resistance to the security forces, throwing various objects and fireballs at them? Here we are silent about the daily provocations of the opposition on the Maidan, about the distortion of the words of the song “Victory Day” ... But what's done is done. The opposition just waited for this.

The December 1 has arrived. Round-the-clock pumping on Channel Five, TVi, 24 Channel, and the loud screams of the Threes have done their work. Almost half a million people went to the streets of Kiev. Even on Saturday calls in social networks and on TV, it became clear that everything would not be limited to peaceful protest. The demonstrators quickly occupied the Maidan, and some individuals immediately climbed onto the tree with the flags of Ukraine, the EU and various political forces. Well, as if the Reichstag took!

Nobody ever thought to restrict the tree. “Provocateurs” (as the Ukrainian opposition likes to call them) began to beat the windows of the KMDA. The "provocateurs" ("titushki") began to catch the "peaceful demonstrators" - and yet yes! Some even caught and showed well on all TV channels. But here they, the contagion, prayed in Ukrainian, and not on the “really Danish”, as the opposition wanted ...

And here - a marvel! Those who had just caught the "titushki", suddenly they themselves climbed into the building of the KMDA and made a night out and a public toilet out of it.

But the brightest events unfolded outside the presidential administration building. The brutal crowd of fanatics went to the assault. The paving stones, chains, sticks, cans, a tractor that was stolen from Maidan, and various pyrotechnics were used. For three hours, a small group of “Berkut” held several hundreds of madmen undergoing real torture. I do not compare this with how stormed the "Golden Eagle" Maidan. The beast rode a tractor on living people, tried to hit the persistent guys with a fire piece in the face and pushed even rows of unshakable security officials with paving stones. Here "Berkut" should pay tribute. For all this aggression, the security forces only occasionally used stun grenades. Well, fireworks periodically flew back to the savages.

The opposition leaders again tried unsuccessfully to shift the responsibility. Calls "Chocolate Hare" Poroshenko, despite his feats and stunt with climbing on the tractor, no one listened.

After 3 hours of torment were over: after a successful attack with tear gas and stun grenades and the onset of fresh forces of the "Berkut" fascist daredevils quickly fled. But soon they returned and saw the already fresh forces of the “Golden Eagle”. Towards evening, the Golden Eagle became faster, and Klitschko managed to take away most of the radicals. True, it was possible with great difficulty and strong words ...

But the furious were not going to disperse and decided to release anger on the Lenin monument. Fortunately the bus with "Berkut" was in place quickly. The attention of half-drunk fascist activists quickly shifted to the bus, but even here the flash-noise grenades did their job.

In the evening the situation began to clear up. Imaginary “titushki” turned out to be Korchinsky’s brothers (strangely, this person doesn’t work for the good of the state in “places not so remote”), insane with militants of the Patriot Ukraine organization and, according to some sources, “Svoboda”. 300 fascist radicals were the main instigators of the riots in Kiev. It is noteworthy that peaceful demonstrators tried to stop them, but it is impossible to stop such people with anything but a strong club. Apparently, therefore, almost every upcoming "berkutovets" was not too lazy to hurt with the baton of a "patriot" who had fallen behind the herd. But let us forgive the children for this prank ... They are people too, and their patience is not unlimited. Journalists also got their hands on it. Still, one cannot but agree that it is very difficult to distinguish a journalist with a mobile phone from an activist with a mobile phone at dusk. Speaking of journalists. Why is it necessary to get into the fray to get from both sides? Then to blame the right?

The opposition continues out of habit to ask for help from the EU and the USA. I wonder if they are a la in Libyan or a la in Iraqi?

This is where the Sevastopol deputy is right, who offered Putin to send troops in the event of American aggression and help the fraternal country ...

"European civilization values" began with the storming of the Cabinet and turned into the ultimate chaos in the country. The Ukrainian authorities have also shown that they are unable to operate effectively in extreme conditions. The Ukrainian authorities have not brought to justice high-ranking instigators of the opposition, who from somewhere have taken it that they have the right to speak on behalf of all the people of Ukraine, as if the people are some kind of integral mass.

In the future, I would like to see water-guns at the security forces. After all, the weather in Kiev is cool, and the radicals were so eager to keep warm ... “Berkut” should act as actively as possible and, if possible, do not go on the defensive. Aggressors should not feel confident for a second. Between divisions of "Berkuta" more coordinated coordination with the maximum elimination of red tape should be made.

So far, everything has calmed down, and the three borsuns Senya, Tyagnibyk and Bugai Vitalik, like analogous characters from the animated series “Fairy Russia”, are seeking to release Yulia Prekhitroy from prison by law and send the government of the “Chancellor” (Azarov) to resign. They understand that such a born revolutionary, as Julia, is more valuable than their three.

In any case, the emergency is not yet introduced. The authorities may suffer a week, but then the issue of unlocking the center of Kiev will become acute. Patience can burst with ordinary shopkeepers and ordinary residents, whose warmth to the freezing demonstrators is clearly presented by a Western-paid zombie-car media. But what is the opposition? Painfully, they are brave when they shut out aggressive thugs ...

Most likely, unlocking will have to use heavy equipment (not necessarily armored vehicles) in order to pull away barricade machines. It was then that mass unrest can occur on an order of magnitude larger than on the hot first day of winter. There were only thousands of 15 protesters on Monday. We can state the choking revolution and the emergence in the center of Kiev of a big hiding place under the Maidan in the TBC Globus. 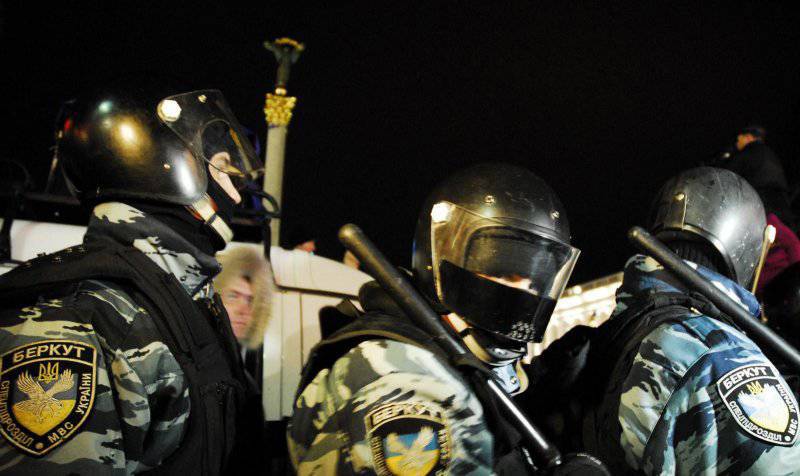 "Golden Eagle" did not collapse before the crowd of abnormals that fit into the role of cannon fodder. Now this special unit has shown that the force version of the revolution will not work. On the shoulders of the guys is maintaining order in the capital. We wish them good luck! Do not step on the same rake, guys! Aggressive protesters and fascist militants are different things. Leave more strength at last.

Ctrl Enter
Noticed oshЫbku Highlight text and press. Ctrl + Enter
We are
"Golden Eagle": everything is just beginning. The fact that the Kiev authorities will never publish"In Kiev, we fought with werewolves." "Golden eagle" told about secrets of the Maidan: snipers, capture of a mortuary, underground smithy
355 comments
Information
Dear reader, to leave comments on the publication, you must to register.