Maybe we need a Premier Legionnaire? ..

December 3 2013
80
2 December 2013 of the year Russian Prime Minister Dmitry Medvedev held a meeting, the title of which looked like this: “On the implementation of the decrees of the President of Russia from 7 of May 2012 of the year No.596 – 606”. During the meeting, not only the current economic situation in the country was discussed, but also the implementation of social programs. The prime minister, with typical preludes for the “benevolent” work of the government, nevertheless announced to the audience that, in principle, they knew perfectly well without him:

The challenge remains to ensure sustainable economic development, where the key factor is increasing productivity.

Recall that at the beginning of the year, the government’s economic bloc declared that by the end of 2013, economic growth could be as high as 3,5%. During the year, this figure was constantly adjusted downwards. Today, the same economic sector is “praying” so that economic growth will not be lower than the indicators that the Russian financial system demonstrated at the peak of the global crisis. Of course, the economy will not go “to the minus”, but the growth that is most likely to be recorded can hardly be attributed to serious achievements. If you still believe the same forecasters from the economic sector of the cabinet of ministers (and trust to these people after their past unfulfilled forecasts is slightly less than none at all), then the economy at the end of December will grow at best in the year (the term “at best” is done special emphasis) on 1,8%.

Having voiced the fact that it was not possible to achieve “sustainable economic development” in the country, the head of the Russian government made it clear that he sees the main reason for this state of affairs in the domestic financial system. One would assume that Dmitry Anatolyevich would mention the obvious sluggishness of the economic work of the government itself and its inability to meet new challenges, but the prime minister said the following:

From this entertaining formulation, it can be understood that the main reason for the unintelligible growth of the Russian economy today, according to the prime minister, is “the situation on world markets”. This, you understand, the situation also builds economic barriers for the Russian government that they can’t overcome. The ministers of the financial and economic bloc are climbing out of their skin, constantly applying some innovative and progressive methods of bringing the Russian economy to steady growth, and the world situation doesn’t do this at all ... At the same time, Dmitry Anatolyevich for some reason does not explain the reasons for quite serious growth the four (except Russia) of the BRICS countries, in contrast to ours. In terms of economic growth in 2013, our country, and this is more than regrettable, no longer even reaches South Africa and Brazil. Well, if we lose to China in recent years, then the new backlog looks somehow very sad. Of course, in the same government, experts can say that our economy has a more pronounced Western option (and in the West, with growth, too, oh-oh), but this is precisely what is regrettable. At that time, while the developing countries of the world were building a multi-vector economic policy, our economic officials persistently signed papers with innumerable obligations to Western financial structures. And now, as they say, “blame nech on the mirror”, when our economy is not only created in the image and likeness (not the best, by the way) of the Western, but also clearly oriented to it. Well, at least the question of persistent desire to keep trillions of rubles of various funds in such currencies as the dollar, the euro and even the British pound sterling.

In the speech of the prime minister, we can single out the following interesting point. Dmitry Medvedev, before mentioning the gathering of unfulfilled dreams of sustainable economic growth, talks about the achievements of the government. Here are some quotes from the chairman of the Russian Cabinet of Ministers:

Special attention is paid to supporting families with children. This year, in the 65 regions, in addition to the norms already in force, a monthly cash payment was introduced at the birth of the third child until he reached the age of three years.

... the direction of support for large families is the free provision of land plots.

This year, the Government has additionally sent 50 billion rubles for the modernization of regional preschool education systems, and together with 9 billion more, this amounted to 59 billion rubles - a lot of money.

... we determined the mechanism for investing the funds of the National Welfare Fund and pension savings, the procedure for conducting an independent technological audit when public control is needed, work should be done on investment programs of companies with state participation and infrastructure monopolies.

Well, and then - about the failure to achieve the desired economic growth. If so, then it turns out that Dmitry Anatolyevich seemed to hint what another reason for the weak growth of the Russian economy: the fulfillment of social obligations ... It turns out (according to the semantic message from this meeting): if it were not for these damned May laws with obligations to the people then there would be no particular problems with economic growth. Well, it would not have been - and no one would remember about him so often ... They say, they promise some here, and now the government is more red ...

What is there to do? - in our country, any authorities (and "white", and "red", and "gray") have been famous for all time, and not only in our country, by the way. But there were only those people who, understanding that they were not able to fulfill the promises, did not look for reasons, but either gave up their seats to others (although in the domestic case this phenomenon was more likely an exception), or they were looking for opportunities. Today, the search for opportunities to solve the accumulated tasks by government officials looks well, very inconspicuous ...

Here, of course, you can argue, immediately stating that, they say, if not they, then who, and stuff like that, but if so, then discuss clearly unrealized giant Russian economic potentials to anything. Then really understand, forgive ...
Well, as an irony, why not invite to the government, for example, Hu Jintao. Remember how tall it was in China? Wow th was growth! And it was he who bought gas and oil from us ... And, after all, a man who is practically "unowned" is sitting on tips from a new Chinese leader. And what would the prime minister come out! Not the general secretary, of course, but ... And why be surprised - we are attracting foreign coaches to clubs and national teams - it has become in the order of things, and this is not the national team ... Then (if anything) there would be a legitimate reason to ask: and how does this prime minister work? .. 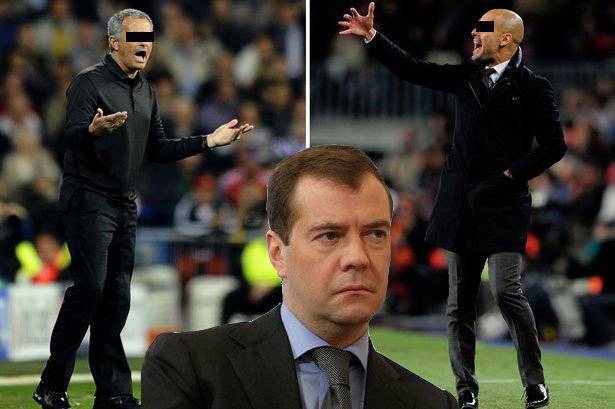 By the way, Dmitry Medvedev did not indirectly confirm the thesis that the "social sphere" is slowing down the Russian economy. How confirmed? And here is a quote:

Difficult decisions are coming on reforming the pension system and the housing and utilities sector.

It turns out that everything that until now the government has taken in the social sector is still flowers. Further, judging by the statement, it will be more difficult. Well, we have already heard about prepayments for housing and communal services from the mouth of the prime minister and about “not raising” the retirement age so that to get a more or less tolerable pension, we need to work up to an age of about one and a half average life expectancy in the country. If these were light initiatives and solutions, then what should we expect next? ..

Ctrl Enter
Noticed oshЫbku Highlight text and press. Ctrl + Enter
We are
Situational analysis of the death of the MH17 flight (Malaysian Boeing 777), made on the basis of engineering analysis from 15.08.2014Results of the week. “In our cooperative, the board is always agreed”
80 comments
Information
Dear reader, to leave comments on the publication, you must to register.