Development of the PAK FA program

December 3 2013
71
Recent months have been marked by significant progress in promoting the program of the Russian fifth-generation fighter PAK FA (Perspective aviation Frontline Aviation Complex). On October 27, 2013 in Komsomolsk-on-Amur, the fifth flight PAK FA prototype, the T-50-5 aircraft, made its first flight. On November 20, this car arrived to undergo tests at the airfield of OJSC MM Gromov Flight Research Institute in Zhukovsky near Moscow. At the beginning of 2014, the PAK FA is supposed to be presented for State tests, the first stage of which is planned to be completed in 2015. By the time of the first flight of the T-50-5, more than 450 flights of the first four flight prototypes of the T-50 took place - we recall that flight tests of the first flight prototype of the T-50-1 were launched on January 29, 2010. 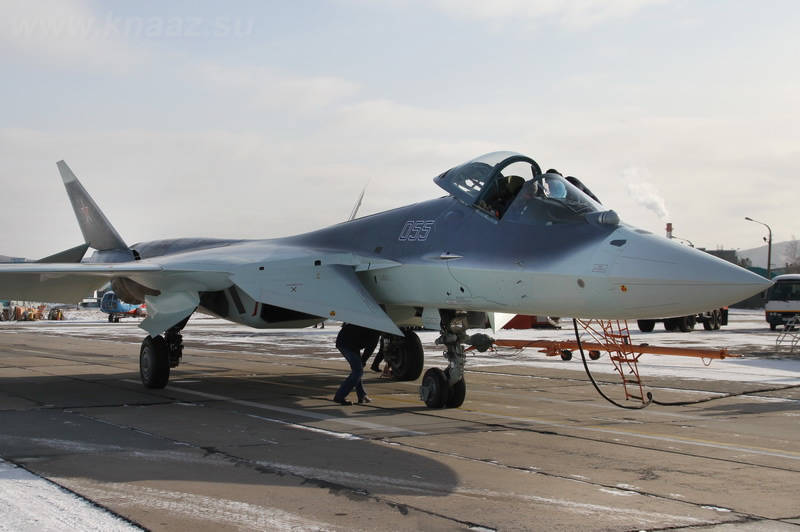 The fifth flying prototype of the fifth-generation fighter of the PAK FA is the T-50-5 ("tail number 055"). Komsomolsk-on-Amur, November 2013 of the year (c) Komsomolsk-on-Amur Aviation Plant named after Yu.A. Gagarin (branch of "Company" Sukhoi ").

At the same time, the creation of the main systems for the PAK FA goes into the production stage.

Within the framework of the PAK FA program, two promising turbofan two-circuit engines for this aircraft are being created, both projects are being carried out by the integrated engine corporation, United Engine Corporation (UEC), established under the auspices of OPK Oboronprom, currently the engines of the first are installed on the PAK FA. stages (“product 117”, AL-41F1) developed by NPO Saturn, which are produced by Ufa Engine-Building Production Association (UMPO). The “117 product” engine with a maximum load of up to 14500 kg is a further development of the well-known AL-31F engine family while retaining their “hot part” and using a modified AL-41F engine compressor (the “20 product”), previously developed as part of the Soviet fighter’s program fifth generation MFI. To date, 18 engines of the first stage have been released (“117 product”), four of which are undergoing bench tests, and 14 - flight tests as part of T-50 objects. At the present stage of development, the main elements of the engine “117 product” have reached the resource of 750 hours before overhaul. Preparations are underway for serial production of the engine at UMPO

For the further development of the PAK FA and the full achievement of all its specified characteristics, a new engine of the second stage (“30 product”) is being developed with a maximum load of up to 16000 kg and more, which should be brought to mass production approximately to the year. The development of the engine of the second stage is carried out in cooperation between the enterprises of the “Engines for Combat Aviation” division of the UEC, while the design bureau integrator for the development of the engine has a branch of UMPO - “OKB im. A. Lulki. The cooperation also involves the Federal State Unitary Enterprise “Scientific and Technical Center for Gas-Turbine Construction“ Salyut ”(Moscow) and OAO NPP“ Motor ”(Ufa). In addition, designers of OAO NPO Saturn (Rybinsk), which is part of another division of the UEC, Engines for Civil Aviation, also take part in the work. The head manufacturer of serial engines of the second stage will be UMPO.

Before the end of 2013, the technical design of the engine of the second stage should be completed and the documentation for the production of the gas generator demonstrators and the engine should be released. In 2014, production of the UMPO and the start of bench tests of experienced gas generators and a demonstration engine "30 product" are planned.

The radar complex of the Sh-121 armament control system of the PAK FA aircraft with onboard radar H036 with a five-antenna system with active phased antenna arrays (AFAR) was created with the leading role of V. V. Tikhomirov Research Institute of Instrument Engineering (NIIP, Zhukovsky). The H036 radar includes five AFARs - an active X-band H036-01-1 phased array antenna located at the front of the fuselage, two side-view AFARs НХNUMXБ and Н036Б-036, and two AFAR Н01Л-НXNNXX-NNNXXНNXXБX036Б-36 and NXNXX-NNXX-01-036-121-2012 X50 radar; wings intended for the detection and identification of targets. Also in the RLK is a universal computing system H3UVS. Flight design tests of prototypes of the X-50 RLK ​​are conducted from July 4 on the T-50-5 and T-121-XNUMX prototypes, and now in the most complete configuration they will be carried out on the T-XNUMX-XNUMX. Serial production of the RLK Sh-XNUMX is being established at OAO Ryazan State Instrument Plant (GRPZ). 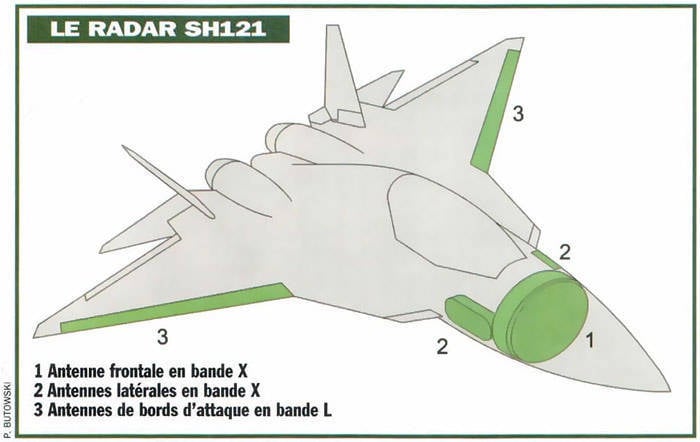 The greatest progress in the development of the X-121 radar is connected with bringing the main element of the radar with AFAR - receiving-transmitting modules to a state of mass production. The production of such modules - wideband microwave amplifiers for PRD, which are a monolithic integrated circuit of the GaN type - is established at the FSUE "Scientific and Industrial Enterprise" Istok "(Fryazino, Moscow region), which is part of the Ruselectronika holding.

The development of microwave modules for the Н036 radar was carried out at the NPP "Istok" from 2003 of the year. On the basis of high-power transistors and monolithic integrated circuits of the microwave range, the enterprise developed microwave modules for an active phased array that combines all the receiving and transmitting channels of the antenna, the power supply circuits, the cooling system, and digital control.

At present, the first line in Russia for the industrial production of transistors and monolithic integrated circuits of the microwave range has been launched at NPP Istok. For our country, this was a real breakthrough, because four years ago, monolithic microwave integrated circuits were produced only in single copies. The launch of this line allowed to start mass production of microwave submodules for radar with AFAR.

The pilot line for assembling, tuning, testing and serial production of microwave submodules AFPAR created in NPP "Istok" has a performance of 100 thousands of modules per year, which is ensured by the serial production of multilayer low-temperature ceramics (LTCC) since 2010. The original ceramic tape for this is manufactured in the enterprise. A specialized section for the machining of body parts for microwave submodules AFAR with a capacity of up to 200 thousand sets of parts per year was commissioned. 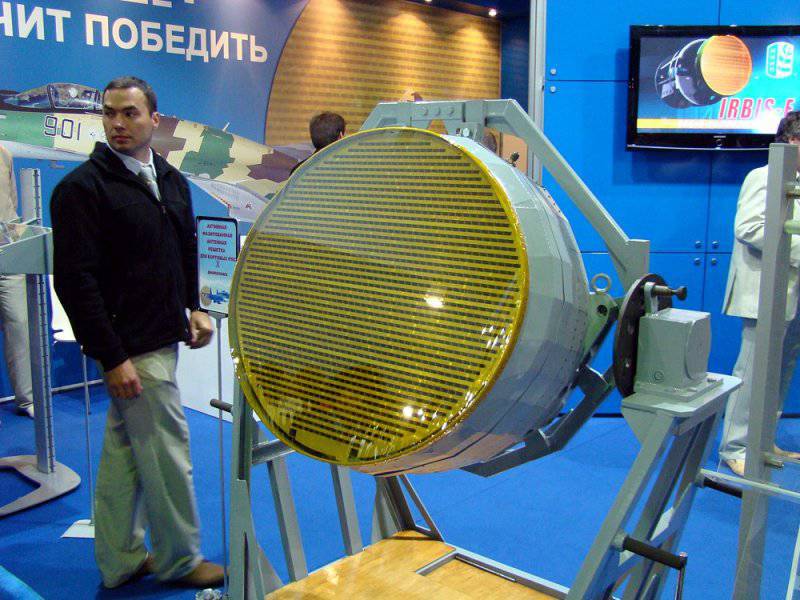 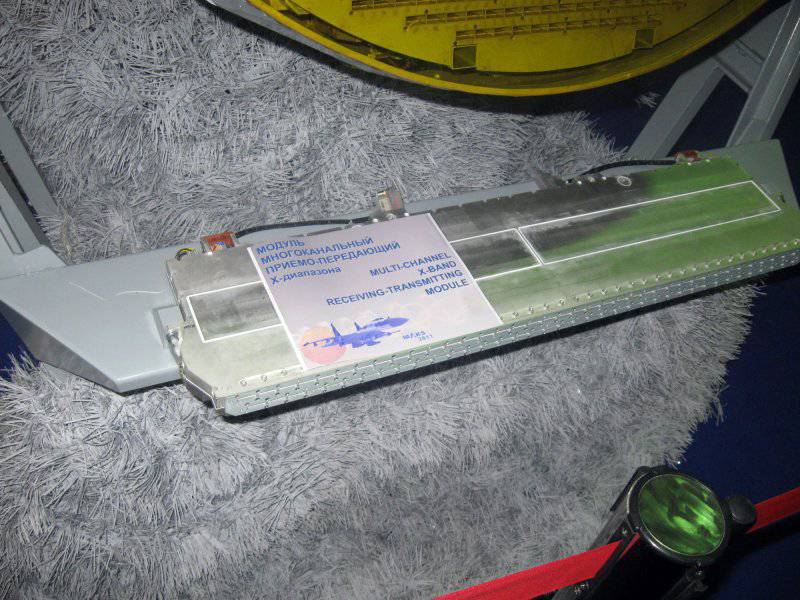 Multichannel transceiver module of the X-band radar Н036 of the PAK-FA radar X-121 of the aircraft in the exposition of the MAKS-2011 air show (с) paralay.iboards.ru 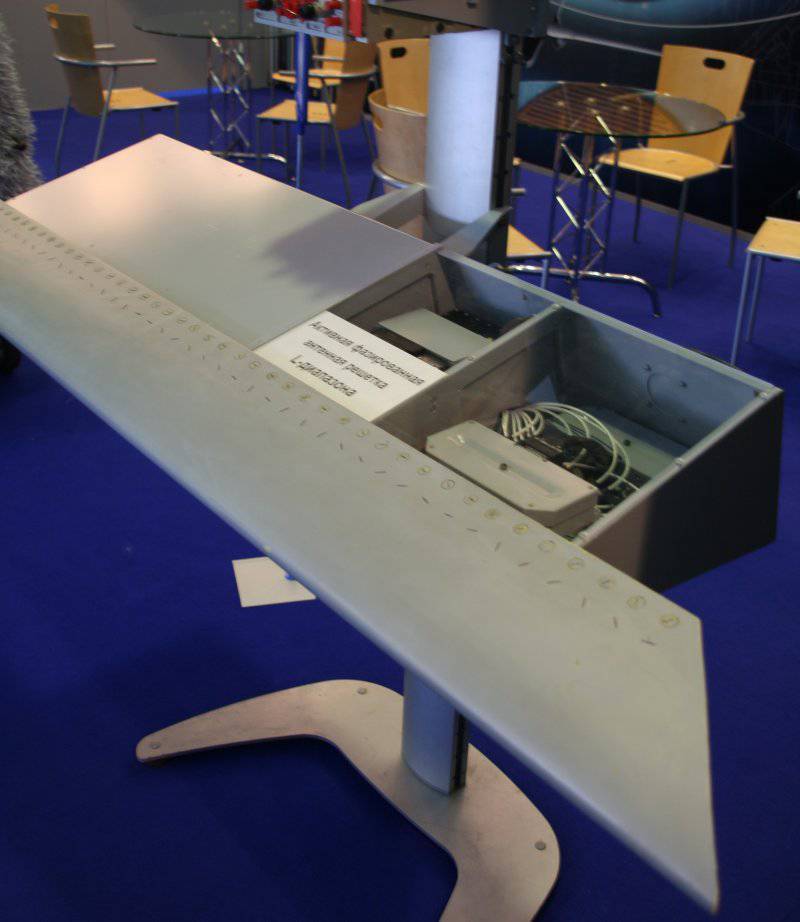 The development of guided weapons for the PAK FA is carried out by the Corporation Tactical Missile Weapons Corporation (KTRV). Rocket complexes weapons of the air-to-air class are created by the Moscow-based State MSC B Vympel named after II Toropov, which is part of KTRV. For the PAK FA "Vympel" leads the development of promising products of the class "air-to-air" of small, medium and long-range internal accommodation and with a phased build-up of their combat characteristics.

In the field of short-range weapons, work is underway to upgrade the P-73 rocket family. The main direction of its modernization was the creation of the “760 product” (RVV-MD) of the so-called “second stage of modernization”. The rocket’s characteristics have been enhanced by equipping it with a combined control system as part of a thermal homing head, an inertial control system (MIS), and a receiver of a radio correction line. Capture the target can be carried out after the launch of the target designation from the MIS. The transverse size of the rocket 320 x 320 mm. She is able to capture the target on the trajectory and, when launched, make a turn of 160 degrees. It was stated that the "760 product" passed state tests and is ready for mass production.

A new, short-range, short-range, highly maneuverable air combat and anti-missile defense missile, also known as K-MD (“300 product”), is also being created. The rocket is equipped with a matrix thermal seeker with the ability to recognize the image and doubled the capture range. Dual-engine engine with up to 100 seconds and three-channel gas-dynamic control device. Rocket tests were expected in 2014-2015.

In the field of medium-range weapons, work is under way to upgrade the P-77 rocket. The first improved version of the rocket was the "170-1 product". The next stage of modernization was the "product 180" (RVV-SD). Lattice handlebars are replaced with flat non-folding handlebars. The rocket is equipped with a new multi-mode active-passive radar seeker. According to known data, mass production of RVV-SD should be launched in 2013 year.

A separate direction in the development of the P-77 family of missiles is the creation of an “increased-range 180-PD product”, and a missile with the “181С product” index. In addition, Vympel is creating a medium-range missile with a new design.

In the field of long-range weapons for the PAK FA Vympel, it is working on upgrading the P-37 rocket. Based on the "610M product", a new "810 product" is being developed. This rocket should be placed in the internal compartments of the PAK FA. Trials are scheduled for 2014 – 2015 years.

A number of new types of weapons from KTRV enterprises are supposed to be used as air-to-surface armaments at the PAK FA first stages: the KNB-250 corrected aerial bomb caliber 250 kg developed by GNPP Region (presumably has a combined satellite and laser semi-active guidance), X-XNUMHUSHK anti-radar missile (developed by A. Ya. Bereznyak GosMKB Raduga OJSC) and modular short-range guided missiles of the X-58 family (developed by the head company KTRV).

Ctrl Enter
Noticed oshЫbku Highlight text and press. Ctrl + Enter
We are
An-12 in AfghanistanFlight Center in Torzhok. Mi-28H
71 comment
Information
Dear reader, to leave comments on the publication, you must to register.