The collapse of the state in Ukraine: what mistakes should Russia and the Union avoid 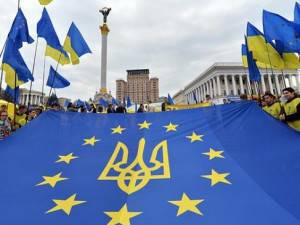 So, the bidding of the Ukrainian president around the integration vector is expected to end with a riot. Euromaidan, which had already turned into a dreary state, was dispersed extremely harshly - with blood, beatings of people lying down and in the middle of the night.


It is only then that political scientists and historians will dig out who needed a violent aggravation. But the fact remains that unnecessary and senseless violence acted as a catalyst for the mobilization of all the discontented. And sooner or later, both sides begin to hate any traitors. Because, at first, “supporters of Eurasian integration” in the Southeast began to hate the “Donetsk”. Then, throwing supporters of European integration, the “Donetsk” turned against another part of Ukrainian society.

Representatives of business, small shopkeepers and other creative class of Kiev disliked the “Donetsk” from the 2004 year, and now, when Ukrainian citizens have become rapidly impoverished and have experienced all the charms of effective “Donetsk” government, and even more so.

But now it does not matter what exactly led to the riot. It is important that with the presence of the state in the Republic of Ukraine, and so there have been problems since the declaration of independence. Now the state has practically disappeared, and very soon it will be no more than in Moldova or Tajikistan.

But, given the size of the republic and the risks of turning it into a source of crisis for the whole of Eurasia, and first of all Russia and Belarus, one must be extremely honest in assessing and forecasting the unfolding collapse of the state in Ukraine. To avoid unnecessary illusions and fantasies.

The first. There is no success of Russia in the Ukrainian direction.

Ukrainian authorities long and hard fled to the flags. “Donetsk” didn’t believe until recently that the course they had chosen led to a total collapse of the state. They were warned about this both in Ukraine and outside.

The policy of multi-vector and permanent trading with the centers of power could be possible until the Customs Union was formed in Eurasia and Ukraine was not caught between two integration groups.

Since the beginning of 2011, Donetsk has had enough time to join one of the Unions. In one case, “Donetsk” would lose industrial assets, in the second - capital in the EU and offshore.

The choice, of course, difficult. But his absence, it seems, will lead to the fact that they will lose both.

However, it is completely wrong to consider the collapse of the state in Ukraine as a victory for Russia. Because those who will come to power after the “Donetsk”, may be more predictable partners. But the state of this in the Ukrainian republic will not increase.

The second. Do not participate in the oligarchic clashes in Ukraine

Whatever the revolt in Kiev, one thing is clear: the full power will go to the Ukrainian oligarchic groups completely. Names in this case have no meaning.

Ukraine is still waiting for a lot of aggravations of the political crisis, during which new characters will appear, who will receive momentary omnipotence, and then will be deposed.

The meaning of oligarchic power lies in the fact that the republic is in constant political and economic crisis. Because during a crisis, assets can be bought for nothing and endlessly shuffle political players. At the same time, the real rulers of the republic can be outside public authority: either abroad or in well-protected estates.

Agreeing with any Ukrainian authorities in the coming 2 – 3 of the year is simply meaningless due to the lack of a subject of power. The subject will be blurred between five to seven FIGs, and the center of power will constantly change.

When at one of the stages of revolt succeeds, then there will be a change in the state system.

Institutionally, this is likely to be in the form of a parliamentary republic — in order to give legitimacy to the absence of a subject of power and to make permanent changes in power legal.

The only thing that can be said with confidence is that people who have made a choice in favor of their capitals will come to power. And this means that Ukraine, after Moldova, will turn into the peripheral market of the European Union.

Third. Instead of an alliance with the Ukrainian state - to allied relations with Ukrainian citizens

However, despite the absence of a subject of power and the state in Kiev, the economic situation will be quite predictable.

Most likely, there will be a default and bankruptcy with the subsequent purchase of assets for a pittance. As a result, many Ukrainian citizens of working age will be without work.

Consequently, in the coming 1,5 – 2, Ukraine will become the main source of guest workers in Eurasia. Moreover, the Ukrainian guest workers will be more motivated to resemble Uzbek rather than Romanian ones. In the sense that the motivation will be a matter of survival, not earnings.

Some migrant workers will be able to swallow up the EU market, in which a plan to replace Arab, Gypsy and African illegal immigrants for white, loyal and well-educated migrants has long been ripening.

Therefore, the key task is to attract Ukrainian citizens to the construction sites of the new industrialization of the Eurasian Union. In particular, the collapse of the Ukrainian state can and should be used to change the demographic situation in the Far East.

Unlike the EU, which will not legitimize Ukrainian migrants under any circumstances, Russia and allies, on the contrary, are interested in organizing a mass relocation of residents, primarily cities in the Southeast. Moreover, it is necessary to stimulate resettlement: with families and simplified legalization, and not guest workers, as the EU will practice.

Ukraine, as a subject of politics, will be dealt with not earlier than in a few years, when the republic passes through a series of riots, electoral crises and changes of elites, after which, at last, there will be at least some kind of subject.

The catastrophic scenario — with the collapse of the republic — is not desirable to be considered, because then we will deal with a set of territories, each of which will have to develop its own methods of integration. And in today's situation it is a thankless task to build such forecasts.

Ctrl Enter
Noticed oshЫbku Highlight text and press. Ctrl + Enter
We are
Albert Pirmanov. Help, save! ...Astana should become the capital of the Eurasian Union: Nazarbayev’s reply to Putin
72 comments
Information
Dear reader, to leave comments on the publication, you must to register.