The Pentagon is not going to leave Europe 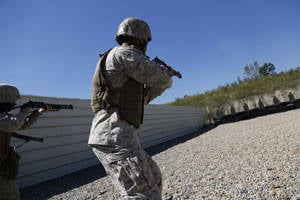 General Philip Breedlove, commander-in-chief of the united armed forces of NATO in Europe and commander of the US Armed Forces in this region, said last week that funding for maintaining American troops in Europe would be reduced by 20% next year. According to the general, this is the last signal about the White House’s attitude to the presence of US troops in Europe after President Barack Obama ordered the redeployment of two brigades of US ground forces (Army) from Europe to America. It shows that Washington is no longer considering Europe as an important element in ensuring its national security.


According to many high-ranking Pentagon leaders, the presence of US troops in Europe keeps US opponents from aggressive actions, strengthens the combat capability of the Allied forces and protects America’s national interests. Regardless of US intentions to withdraw troops from Afghanistan and resolve the humanitarian crisis in this region, the basing of US military units in Europe allows the Pentagon to plan its operations and respond to unexpected crisis situations arising in various regions of the world. The estimated reduction of the US Armed Forces in Europe, according to some military experts, will only lead to a weakening of Washington’s position on the world stage and significantly weaken NATO.

Currently, the general is trying to find approaches to taking measures to ensure the growing responsibility of the US military for maintaining the security of NATO allies at the required level, despite a significant reduction in the funds allocated to the MoD. These include the upcoming withdrawal of US military contingents from Afghanistan, the settlement of the extremely complex, brutal and bloody civil conflict in Syria, the search for diplomatic ways of resolving the problem with the Iranian nuclear program, and the resolution of the issue of resolving the recurring inter-religious conflict in North Africa.

According to the commander, the presence of a significant contingent of the US Armed Forces in Europe is extremely important for Washington in the light of the effective resolution of all these issues and countering the many other emerging threats to America’s national security. According to many military experts, one of the forms of maintaining confidence in the United States and ensuring flexibility in conducting foreign policy activities is the continued preservation of advanced military bases in the countries of the European region.

The US DoD is able to take all necessary measures to maintain the required level of combat capability and effectiveness of its European military contingents. However, according to some experts, the withdrawal of US military units from Europe will allow the Pentagon to cut the budget by less than 1%.

Preserving US military bases in Europe protects America’s national interests and allows politicians to quickly respond to crises in various parts of the world. The latest example of such a reaction was the action when 550 Marines were transferred from one of the military bases in Spain to a military base in Italy, so that the necessary measures could be taken to resolve the crisis that erupted in Egypt as soon as possible. Another example of such actions is the redeployment of US Navy ships on duty in the Mediterranean Sea to the shores of Syria and bringing them to combat readiness due to the increasing complexity of the situation in this country, where the civil war that destabilized the situation in the Greater Middle East abruptly gained momentum.

General Breedlove announced that by the end of the Cold War, the US European Command had already reduced the number of infrastructure facilities of its troops on this continent by almost 75%. Today there is practically nothing left that could be reduced in the military contingents deployed in this region. “We have reduced troops and objects to the size that, in my opinion, is necessary to solve the tasks before us, in accordance with the wishes of our allies,” the general said. He also added that the further reduction of the American ground forces in Europe would create certain problems with the fulfillment of the White House’s obligations to its allies and partners.

The ability of US ruling structures and political circles to respond promptly and actively to rapidly changing and dangerous situations in Africa, the Middle East and Eastern Europe largely depends on the flexibility and combat capabilities of the Pentagon military contingents deployed in the advanced military bases of the allied European countries. The national security of the United States and NATO countries today, more than ever before, are considered by many American military experts to depend on military contingents stationed on the European continent.

According to plans to reduce the US military presence in Europe, significant changes will affect primarily the grouping of US troops in Germany. Currently in Germany, US military units are deployed with a total of 52 thousand troops. In a secret document of the US State Department, which became the property of the American and world community, America’s plans for the FRG are detailed. There it is indicated that by the beginning of 2015, a little less than 10,5 thousand troops should be sent from Germany to the continent, which are currently stationed at 23 military facilities located mainly in the federal states of Hesse and Baden-Württemberg. These objects will be transferred to the Ministry of Defense of Germany.

There is no question now about the complete withdrawal of the American contingent. In accordance with the plans of the Pentagon, the military base in Ramstein, where the European missile defense command center is located, will continue to function. Of the thousands of US troops remaining in Germany over 40, by the end of 2025, about 15 thousand are planned to be transferred to military bases in Poland and the Baltic countries.

Ctrl Enter
Noticed oshЫbku Highlight text and press. Ctrl + Enter
We are
US expert community is trying to identify ways out of the Afghan impasse
22 comments
Information
Dear reader, to leave comments on the publication, you must to register.