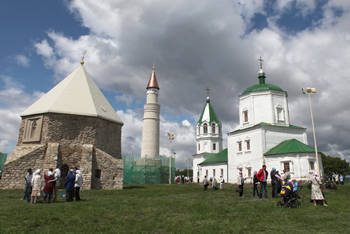 A series of arson churches continued in Tatarstan. On the night of November 29, unidentified persons burned down two Orthodox churches - in honor of the Nativity of St. John the Forerunner in the village of Albay of the Mamadyshsky district and in honor of the Life-giving Trinity in the village of the Baptized Kazyl of the Rybno-Slobodsky district of the republic. A week earlier, two more churches were burned in Tatarstan. The prosecutor's office intends to qualify the crimes as terrorist acts.


The parishioners of the temples set on fire on the eve of the church were Kryashens, a subethnos of the Tatar people, baptized Tatars. As NG has already reported (see number from 19.11.13), a week in Tatarstan two more Orthodox churches were burning.

The first, in honor of St. Dmitry Solunsky in the village of Lenino in the Novosheshminsky district (the church was completely destroyed), the second in honor of the new martyrs and confessors of Russia in Chistopol (this church was saved). The prosecutor's office of Tatarstan described the events as terrorist acts and ordered the initiation of criminal cases under the relevant articles. At an emergency meeting last Friday, the head of the department, Ildus Nafikov, said that the arsons are not random, and law enforcement agencies are obliged to give an adequate response to attackers who are counting on destabilizing the situation in the region.

According to "NG", the priests who served in the temples affected by the fire, put a round-the-clock police guard.

Figures of the Russian national-patriotic organizations of the republic are convinced that the burning of Orthodox churches in Tatarstan is the work of terrorists, moreover, radical and Islamic. This is, in particular, said in an address to the public by a well-known in Tatarstan scholar, chairman of the Society of Russian Culture of Tatarstan, professor Alexander Salagaev. In his opinion, the passivity of the authorities regarding extremists in Tatarstan allowed them to commit lawlessness over the past 15 years. “In 1990, there was an attempt to destroy the foundation of St. Tatiana’s church under construction in Naberezhnye Chelny. At the beginning of 2010, the arson of the priest’s house in the village of Bazaar Mataki was set on fire. In September and November, two chapels in the Trans-Kama region were set on fire. 17 November set fire to two churches in Chistopol and with. Lenino Novosheshminsky area and today two more temples - the church in the village. Albay Mamadysh district in honor of the birth of St.. In. The forerunner (the temple was built in 1873) and the church in the village of the Baptized Kazyly of the Rybnoe-Slobodsky district of Tatarstan in honor of the Holy Trinity, ”Salagayev lists in his address to the public (the letter’s features have been preserved. -“ NG ”).

According to Salagaev, religious extremists declared war on Orthodoxy. At the same time, the Tatarstan metropolis, according to Salagayev, “instead of sounding the alarm”, “with stingy lines states events or simply calls them“ outrageous cases of vandalism ”. “Why do we need such a metropolis and such a metropolitan who cannot even say a word in defense of their flock? Now the Orthodox in Tatarstan can only hope for the protection of Patriarch of Moscow and All Russia Kirill, ”the leader of the Society of Russian Culture of Tatarstan is sure. His opinion is shared by analysts of the Russian Institute for Strategic Studies, who are confident that “in 2013, Tatarstan risks entering all the world reports of Christian human rights organizations as a stress point.”

Yesterday, the head of the Spiritual Administration of Muslims of Tatarstan, Mufti Camille Samigullin, expressed concern about the burning of Orthodox churches, in particular, stating that "certain forces" are trying to destabilize the situation in the republic. “We sincerely regret what happened and hope that the law enforcement agencies will find the perpetrators and they will be duly punished. We urge to unite our society against the forces that want to bring discord in relations between different nations and denominations, ”said the mufti.

Ctrl Enter
Noticed oshЫbku Highlight text and press. Ctrl + Enter
We are
New developments of KAMAZ showed to the President of TatarstanIn Kosovo, with the connivance of KFOR, Christian shrines are destroyed
53 comments
Information
Dear reader, to leave comments on the publication, you must to register.