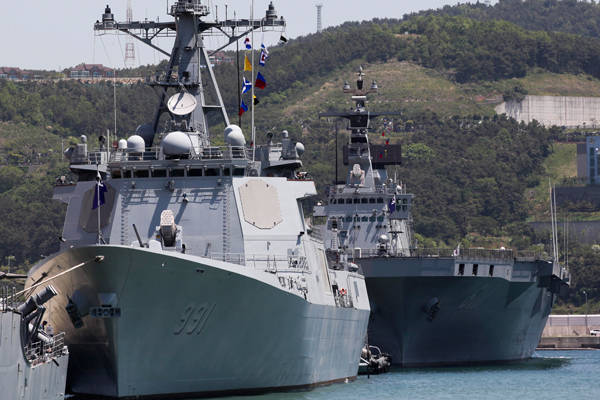 Prior to 2022, South Korea will receive three more new destroyers with a displacement of 7600 tons, which will be equipped with the high-tech combat information and control system (BIUS) "Yizhis". Thus, the total number of ships of this class in Korea will grow from the current three to six.


As reported by Enkhap news agency referring to military sources, the decision to build three more destroyers from the Izhis IIC (project KDX-III) will be officially made on December 22 during a meeting of the Joint Committee of the Chiefs of Staff of the Armed Forces of the Republic of Korea.

The source also admitted that at first the decision to build three more such ships was going to be postponed, but recently they changed their mind. This was influenced by the behavior of neighboring states. It was recognized that the DPRK is beginning to pose an increasing threat to the sea, Japan is building up its naval forces, while claiming to be controlled by the South Koreans Toktoko archipelago in the East (Japan) Sea. In addition, China, a week ago, unilaterally introduced an air defense identification zone, which included the space above the Iodo submarine rock, which Seoul considers its own.

New powerful destroyers should be the response of South Korea to the claims of the neighboring powers. The destroyers are planned to be placed on the new base of the Korean Navy on Jeju Island. There will be formed a "mobile sea group Iodo-Dokdo", which will have to ensure the protection of the interests of South Korea in the designated regions. "The countries around us are rapidly increasing their naval forces. We are forced to respond to this accordingly," said a source in the South Korean Defense Ministry.

It was noted that Seoul will continue to increase the number of destroyers with the Ijuzh ICCS. So in the period from 2022 to 2028. about three billion dollars will be allocated for these needs.

We also note that last year, at the request of the country's parliament, the Agency for Defense Procurement Programs of the Republic of Korea developed the “Plan for Increasing the Sea Power of Korea”. According to the document, to protect its "basic interests" at sea, South Korea must have at least three or four naval mobile groups. Each such unit will consist of two destroyers from the Izhis BIUS (displacement of 7600 tons each), two conventional destroyers (displacement of 4200 tons), 1 transport ship, 1 of the support ship, two submarines (displacement of 3000 tons), three P-3 aircraft with and 16 helicopters.

The Izhis system (Aegis) is a multifunctional combat information and control system consisting of a network of sensors and computers, as well as strike-fighting means in the form of interceptor missiles of the first generation Standard missile 2 (SM-2) and more advanced interceptor missiles Standard missile 3 (SM-3), which are launched using universal installations of the vertical launch Mk 41, located under the main deck of cruisers and destroyers.

At the moment, the South Korean Navy has three destroyers with the Izhis BIUS (project KD-III), which began to be supplied to Korea with the 2007 G .: the Sejong King (DDG-991), the Yulgok I And (the destroyer) -992), destroyer: "Gvon Yule" (DDG-993). These ships are analogous to American destroyers with guided missile weapons like "Arly Burke".

Ctrl Enter
Noticed oshЫbku Highlight text and press. Ctrl + Enter
We are
Korea strengthens Navy
8 comments
Information
Dear reader, to leave comments on the publication, you must to register.