Great checkerboard: the US and the EU again got their ears 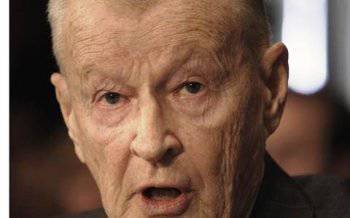 Under the Polish moans, Lithuanian yapping and other cries, Ukraine did not sign an association agreement with the EU. Having suffered a defeat in diplomacy, the European Union sacrificed the people of Ukraine and organized Euromaidan ... The leaders of the deceived people were “opposition leaders” - rude Yatsenyuk, impudent Pygnybok and boxer Klitschko. On the consequences of such unwise steps of Western politicians to a Canadian journalist Argil Turner told a famous political scientist Brzezin Zbigniewski.


- Mr. Zbigniewski, in your previous interview “The Great Drafts Board or How the USA Can Get Around the Ear,” you spoke in detail about future prospects in world politics. I must admit that your assumptions began to take on very real outlines ...

- Thank you, here, in general, there is nothing special and super-genius, even the usual analysis of recent events in international life suggests that the West is rapidly forming a chain of hot spots of instability. Iraq, Yugoslavia, Libya, Georgia, Syria, and now Ukraine ... So they are trying to implement the Anaconda Loop plan, but they forget that, in contrast to it, there is a Plan for a Donkey ...

All the roots of the current internal Ukrainian conflict should be sought not in Ukraine itself, but in Europe and the USA.

The modern economic and political situation in the world can be characterized not simply, but very simply: the US is increasingly losing its leading position in the world, the Western economy is increasingly falling into a giant collapse, the power and influence of China is growing, and the countries of the Customs Union are successfully resisting the possible risks.
In this situation, the West has no choice but to get a new living space to be sacrificed as a victim.

First, the West needs to support its economy, which is rolling into crisis, with new sales markets and to load industry, reduce the number of unemployed in order to ensure social and political stability.

Secondly, the West needs to get rid of all forces from migrants from non-European countries, mainly Muslim, who have begun to annoy public opinion very much, replacing them with less radical-minded slaves from Eastern Europe.

And finally, thirdly, the West should in no way allow Ukraine to integrate with the countries of the Customs Union, as this will not only save Ukraine from collapse, but also significantly strengthen one of the main geostrategic opponents of the West - Russia.
Thus, the West, after Ukraine’s refusal to sign an association agreement, prepared for Ukraine the fate of "European Egypt." And it is very sad for the citizens of Ukraine.

“However, back in 1999, your opponent Zbigniew Brzezinski said:“ Ukraine for us is an outpost of the West. A new world order with US hegemony is being created against Russia, at the expense of Russia and on the ruins of Russia ... ”How do the recent events relating to Ukraine with this statement?

- It is clear that in their activities, both the United States and the European Union adhere to this thesis. Someone may ask the question: why did the EU not bother with signing such a thesis during the presidency of Viktor Yushchenko? After all, he would have no problems at all, would he? And the whole clue to this apparent paradox is that the EU decided that Yushchenko would have to pay, and pay seriously, because he was their "son of a bitch." And in the case of Yanukovych, you can get by with much less significant amounts - 3-4 billion dollars to finance Euromaidan, that's all.

Removing Yanukovych, the West receives all the eggs in one basket: the absolutely pro-Western leadership of Ukraine, the collapse of its economy, more than 40 millions of slaves and an anti-Russian, anti-Slavic, anti-Russian bridgehead right on the Russian border. And it is almost a gift!

- And there is evidence of that?

- Of course. The US Embassy in Moscow is headed by Michael McFaul, an expert on the so-called “color revolutions”, who coordinates their organization throughout the post-Soviet space. Money for Euromaidan funding went through the US Embassy in Moscow. And now it is clear that McFaul failed. And my good friend Alexander Domrin, a professor at the University of Virginia, has already told me that after 25 December 2013, this person will leave the post of ambassador.
By the way, it would be very curious to analyze the phone calls of the so-called "leaders of the Ukrainian opposition" these days. To whom they called and what they were talking about. I am sure we would have learned a lot of interesting things. And I do not understand why Viktor Yanukovych is still embarrassed to divulge the content of these conversations. Probably, he hopes for some integrity from the Western countries. But at least it's naive. And if you call a spade a spade, it's just silly and unwise for a politician.

In recent years, the Ukrainian government, regardless of who was the president of Ukraine, has done everything to lose its credibility. The notorious “multi-vector” shyness led to the fact that the Ukrainian economy, which was closely coordinated with Russia, almost died, the national debt assumed a truly gigantic size. The poverty of Ukrainian citizens does not surprise anyone. The lack of hope for a better life in the future, the complete futility of the present against the background of the deliberately insolent luxury of oligarchs and officials led to a hidden increase in discontent among the widest masses. It was competently used in organizing the so-called "popular" unrest in Kiev in recent days.

The West has easily, as they say, “threw up” the Ukrainian authorities, knowing full well that only the kamikaze can sign the association agreement with the EU in the form in which it was proposed to make Ukraine.

In other words, the Ukrainian leadership was offered to betray and sell their country for free. Such precedents in the world stories simply no.

Responsibility for the recent events in Kiev lies directly on the European European Council's permanent chairman, Stefan Fule, the European Commissioner for Enlargement and Neighborhood Policy (!), Jose Manuel Barroso, the President of the European Commission, who by their shameless and rude political statements contributed to the destabilization of the socio-political situation Ukraine. These people have a place in the dock at the Hague Tribunal.

If the matter were limited only to this, this would have already been a gross and blatant interference in the internal affairs of a sovereign state.

The EU leadership was informed about the upcoming assault on the presidential administration of Ukraine, and the participation of militants in it, in the preparation of which specialists of Ukrainian origin who served in the special forces of the United States and Canada took part.

- How do you assess the behavior of Russia in this difficult situation?

- It would be very naive and unworthy of common sense to believe that Putin will just allow the EU to implement the Anschluss of Ukraine. While the West is trying to eliminate Yanukovich with his aggressive methods and get “Lebensraum im Osten”, Putin is watching what is happening.

Russia is very reserved. In fact, Russian politicians do not participate in rallies in support of not signing an association agreement with the EU somewhere in Kharkiv or Zaporizhia, Odessa or Sevastopol. But at the same time, it should be understood that the West should not bring matters to a situation at least a bit similar to what happened in August 2008 of the year in Tskhinval. The result will be not just similar to that, but truly disastrous and shameful for those who organized Euromaidan.
We must clearly understand that Putin will never agree to Russia lose its influence in Ukraine, but at the same time it will use such methods and methods that are fully consistent with international law. So the US and the EU will have to put up with another hit in the "Pit for a donkey."

I advise Michael McFaul, Herman Van Rompuy, Stefan Fule and José Manuel Barroso to watch the popular Soviet film Gentlemen of Luck very carefully, where one of the characters beats the ears of another with a chessboard ...

The rules of the game end where the other side ceases to comply with them.

And again: when I first came to the USSR, in 1980, during the Olympic Games, I was very surprised by the pastime of Soviet pensioners: they constantly played chess and the game almost unknown in the West, which was called “Zabit v kozla” . As a rule, she was accompanied by strong blows with bones on the table and incomprehensible shouts. And the loser climbed under the table, and there, under the laughter of the other players, bleated heartlessly, depicting a famous horned animal.

As I was told then, this game requires remarkable ingenuity, truly strategic prudence and calmness. And if the United States, together with the EU, decided to “Zabit v kozla” with the Russians, it is obvious that they will lose.

Ctrl Enter
Noticed a mistake Highlight text and press. Ctrl + Enter
We are
Great checkerboard board or complete collapse of Mr. BrzezinskiFinancial and political secrets of Oleg Pyagnibok and Vitaly Klitschko
68 comments
Information
Dear reader, to leave comments on the publication, you must to register.