December 2 2013
8
World experts are unanimous that the role of the mine weaponsused both in the offensive and in the defense depends on the qualitative development of the equipment and devices for laying mines, as well as on the improvement of the mines themselves. Military designers and engineers are constantly improving the system of high-speed installation of mines in the ground and vnabros. Real success in this area allows the use of minefields in the course of modern combat.


Usually minefields are placed to cover their positions in order to delay the attacking forces of the enemy or to force them into other zones where they will be hit by other types of weapons. A mine-laying strategy is envisaged directly on the enemy’s routes and in the rear to prevent the introduction of second echelons or reserves into battle. The minefields are capable of stopping the enemy breaking through the defense line or strengthening the existing defenses of the defenders.

But even in the offensive, the role of mines can hardly be overestimated - minefields cover the open flanks, the fighting forces of the counterattacking enemy are delayed and destroyed, and the minefields slow down the enemy’s withdrawal to their positions after the attack.

If we analyze the ways of development of mining tools, we can distinguish the following areas:
- the use of mechanical equipment for the installation of mines, which allows very quickly to install minefields with small forces;
- giving maximum attention to the improvement of anti-tank mines as an effective means of destroying enemy armored vehicles, as well as modifications of anti-vehicle mines that hit unarmored targets (transporters, cars, engineering vehicles, airplanes and helicopters);
- a significant increase in the efficiency of mines due to the use of a directional attack charge, as well as the use of an electronic fuse (non-contact and contact) with a non-recoverable element and a controlled service life. Such a mine, after the expiration of the programmed period, is self-destructed either by undermining or passing to a safe state;
- a significant increase in the mechanical properties of mines due to the use of high-strength materials and new design solutions that allow mines to fall from considerable heights, withstanding large accelerations (the installation of mines in the pipeline);
- the development and use of remote mining systems, which allows the installation of minefields not only to engineering units, but also to other types of troops: aviation, artillery, Navy;
- the development of new methods for organizing the work of the rear services to provide troops with ammunition for mines, in connection with the increased capabilities of various units in the construction of minefields.

Currently, NATO mainly uses minelayers to set up anti-tank mines. Minelayers are divided into trailed and self-propelled - the first most. The main work of minelayers is to place mines on the surface and in the ground itself. Structurally, there is a change in the mining step, which allows you to set the desired density of the barrier. Mainly anti-tank and anti-tracked mines are used in mining.

The minelayers of the FFV 5821 of the Federal Republic of Germany, manufactured by a Swedish company, entered service in the Bundeswehr and the Netherlands armed forces. The barrier is trailed and towed by an 7-ton vehicle loaded with 720 mines, the installation rate of the mine range is 20 min. Per minute.

The British Army is also equipped with trailed minelayers, which are towed by tracked armored troop-carrier FV 432 “Trojan”, in the cargo hold of which are 144 mines. It is also allowed to use the FV 602 “Stolvet” carriage loaded with 500 mines for transportation of the haul.

Minelayer ST-AT / V, made in Spain, is of a trailed type and places anti-tank anti-bottom, anti-tracked mines into the ground or on the surface. The haulier is towed by an armored personnel carrier loaded with 200 mines.

French minelayer mod. F1 works on a wheelbase. Its peculiarity is that it digs holes for each of the mines without damaging the vegetation layer. The mine is placed under a raised layer of earth, and then the installation site is rolled by a roller. This minelayer is designed for the installation of anti-tank mines HPD mod. F2 and anti-track ASRM. The cargo compartment of the vehicle can hold four 112 min cassettes. All the installation of mines are performed automatically. French minelayers are also purchased by the Belgian army. The rate of mining - 400 min per hour.

On the armament of the Western armies are remote mining systems. These systems are a fundamentally new tool for installing minefields in a short time (several minutes) at a distance of tens of meters to hundreds of kilometers. The system of remote mining includes anti-vehicle, anti-personnel and anti-tank mines, installation vehicle carriers. The role of the carrier can be performed by a ground vehicle, a rocket, a helicopter, an airplane, an artillery shell.

Mines that have fallen to the ground are transferred to the combat position and are triggered by the set target. Any attempt by the enemy to remove a mine leads to its undermining. Upon expiration of the service life, the mine itself is self-destructing. As tests have shown, the detection of mines by the crews of combat vehicles is difficult and, as a rule, mines go unnoticed.

GEMSS (USA) ground-based mining system is also of interest, the basis of which is the M128 trailed minelayer, moved by the tracked armored personnel carrier M113. Two types of mines to be installed are the anti-tank anti-bottom M75 and anti-personnel fragmentation M74, which are loaded into the compartment in the number of 800 units. During the movement of the mine layer, mines are scattered to a distance of 60 meters. Within 15 minutes, the minelayer creates a mined strip the size of 1000X60. The 60 kits of the GEMSS surface mining system were tested by US land forces in Europe. As a result of the operation, the disadvantages of the complex were revealed - a large mass of the minelayer and the difficulty of imparting a rotation to the mine 2500 rpm in order to remove one of the fuse protection stages.

The US Army also has the Vulkan universal mining systems in service. They are mounted on a 5-ton M817 vehicle or on a Black Hawk helicopter. The system’s ammunition consists of four disposable 40 modules for mine cassettes. Each tape contains one anti-personnel fragmentation mine and five anti-tank mines. One refueling provides mining for 30 minutes of 1000X50 m area. This system is used by the American "rapid deployment forces".

The US military is also successfully using the new rocket mining system. It consists of 12-ti RSML MLRS and missiles with cassettes min. The firing range to 40 km, the duration of the volley - 60 with., Mined area - 1000х400 m. This system is also in service with France, England, Italy.

The British Army is equipped with a Ranger land mine system, which is designed for the installation of anti-personnel high-explosive mines. In one refueling system are 1296 min. The firing range is 100 meters, the pace - 18 min per minute. The recharging of the system is carried out by two employees in 6 minutes. The main purpose of the mining system is to strengthen non-explosive barriers and anti-tank minefields.

Western military units also use helicopter mining systems, which are designed to restrict the mobility of mechanized and tank parts of the enemy. But the system has a significant drawback - the vulnerability of helicopters. One helicopter refueling contributes to the establishment of a mine strip measuring 17x1000 m in 50 minutes.

Today, in the armies of NATO countries, new types of mine-barriers are being tested, the basic principle of which is the pyrotechnic installation of anti-tank and anti-personnel mines in the issue. For example, the modular mining system MOPMS (USA) establishes focal mixed fields to cover defended positions. Management of mining is carried out remotely (by radio or by wire). Minami overlaps the area - within a radius of 35 meters.

The portable installation of mining (Italy) is very interesting. It is designed for all types of troops. Allows for the minimum time to block defended positions from the penetration of enemy infantry.

But work on improving minefield systems is ongoing. Experts expect a breakthrough in this area in the very near future.

Production of minelayers is conducted in the countries of the former Soviet Union. So, in Ukraine, their release is carried out at the Kryukovsky machine-building plant.

This plant is one of the oldest manufactures. It was created in 1869 year, as car-repair workshops engaged in the current repair of cars for the Kharkiv-Nikolaev railway. From 1900, 400 workers worked in production, who repaired not only 120 freight, but also 20 passenger cars per month for the needs of the railway. 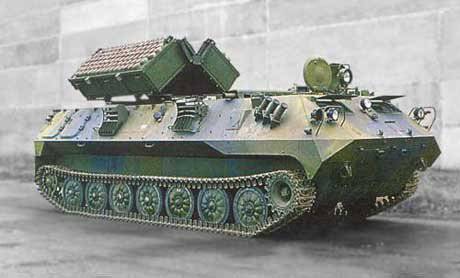 Today, the Krukovka Carriage Works occupies leading positions in the design and manufacture of passenger cars for the railways, as well as subway cars. But, in addition to civilian products, the plant produces special armored vehicles - including the minelayer I-52, intended for remote setting of minefields. And-52 is able to set anti-personnel and anti-tank mines at any time of day and in a wide temperature range - from minus 45 ° C to plus 45 ° C, as well as with slopes (ascents, descents, slopes) to 15 degrees. The minelayer I-52 in the process of movement provides one- and two-way installation of minefields in a vbros manner. When parked, the X-NUMX is capable of setting minefields by automatically shooting mines from a cassette. The cassettes are located in special containers mounted on the MT-LBu light multi-purpose chassis. 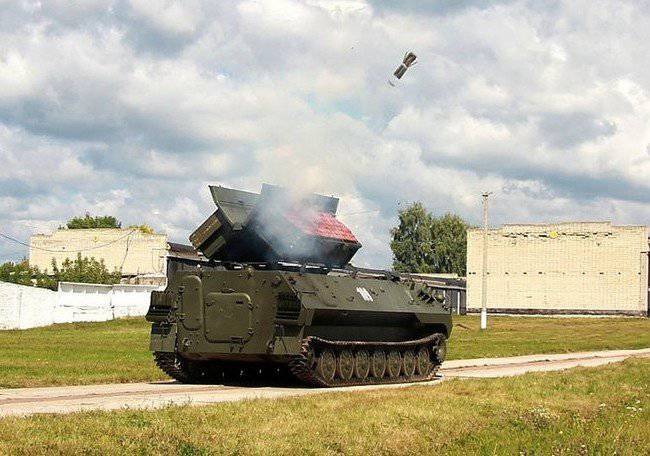 The minelayer I-52 is in service with the 12 engineering regiment stationed in the Zhytomyr region in the city of Novograd-Volynsky.
Main technical characteristics of mine layer I-52:
Maximum transport speed with a full set of cargo - 61,5 km / h.
Cruising range - 500 km.
Operating weight at full load - 16000 kg.
Overall dimensions in transport position: 2200 mm (height), 7210 mm (length), 2850 mm (width).
Overall dimensions in working position: 3300 mm (height), 7210 mm (length), 3450 mm (width).
Crew - 2 person.
Types of installed minefields - anti-personnel, anti-tank and mixed. Types of mines: PFM-1, ПМФ-1С, КСО-1, ПОМ-1, ПОМ-2, ГТМ-1, ПТМ-3.
The installation method min - shooting from cassettes, ejection.
The number of containers - 2 to 90 min pieces in each.
The number of lanes of a minefield installed in a single pass of the machine is 1 or 2.
Mining speed - 10-40 km / h.
The angle of rotation of containers in the horizontal plane - 360 degrees.
The installation angle of the cassettes in containers in the vertical plane is 50 degrees.
The time taken to bring the vehicle from the transport to working condition is 5 minutes.
Ammunition reload time - 120 min. (crew) or 20 min. (demining unit).

Minelayers are in demand in the market of weapons manufacturers. Therefore, Ukrainian suppliers of this segment of military equipment have prospects and incentives for the development, modification and expansion of the mine-laying line for various types and purposes.