Discussion of the implementation of the state defense order. Why without Rogozin, why without Shoigu? ..

December 2 2013
77
Last week, Russian President Vladimir Putin in Sochi held a series of meetings devoted to the consideration of issues relating to state defense orders and the general state of the Armed Forces. The theme of the first meeting (from November 27 2013 of the year) was directly related to the development of the Strategic Missile Forces.


The topic is definitely important. It is also important that the initiator of the raising of this topic for discussion is the president of Russia, and therefore the meeting should not be similar to the status of a sort of “near-defense mezhdosboychik”. However, from the very first personnel of the broadcast of the meeting in Sochi, people who are interested in the essence of the problems of the state defense order have some questions. And, perhaps, the main question: why is not among those invited by the president to this meeting:

a) Deputy Prime Minister Dmitry Rogozin, who is called upon by the government to supervise all issues related to the defense order,
b) Minister of Defense Sergei Shoigu, acting as the chief official of the ministry, who is the direct customer of the new military equipment and weapons. 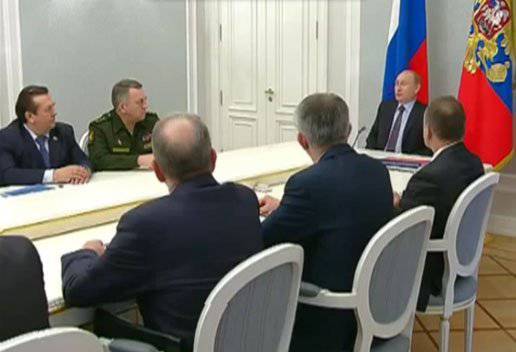 It was especially strange because the meeting was the first one, and therefore, by definition, it should have been of high significance. There was a high significance, but the absence of the above-mentioned officials in the office set aside for discussing the supply of new weapons systems to the Strategic Missile Forces in Sochi was alarming, so to say.

From the military department, the commander of the Strategic Missile Forces, Colonel-General Sergei Karakaev, from industrialists, for example, Vladimir Degtyar, Director General (he is the Chief Designer) of the State Medical Center “Design Bureau named after Akademik Makeyev”, attended the meeting.

Before discussing the topic, Vladimir Putin noted that he had brought together two parties (customers and executors of the state defense order) to find out the main points of the implementation of the plans outlined earlier in the working productive conversation and to clarify how fast the customer finances and how clearly the obligations are fulfilled directly by industrialists.

Vladimir Putin:
Today’s meeting we will begin a series of meetings on the implementation of the state defense order, and I propose to look at this problem more broadly. Namely, I would like to hear from the chief designers and the commanders of the respective types and types of troops during these meetings: from the civilian part - how the customer formulates his order, how stable this order is, how the funding goes, how rhythmically, how administrative support is provided; I would like to hear from the military how the industry copes with its tasks, whether everything is done on time, whether the products are of proper quality.

So, the discussion of the situation with the implementation of the state defense order (segment of the Strategic Missile Forces) took place without, in fact, the main government officials responsible for its implementation. They did not participate in the meeting on the supply of new weapons systems in the Navy (in particular, the development of nuclear submarine forces), which was also held on November 27 in Sochi.

Meetings of this type continued the next day. The third meeting was devoted to the implementation of the state defense order in the segment of the Russian Air Force. And again an interesting point - the absence of Dmitry Rogozin and Sergey Shoigu at the meeting. Here the military department was represented by Commander-in-Chief of the Air Force, Lieutenant-General Viktor Bondarev.

Meeting on the development of the orbital grouping of military and dual-purpose spacecraft from November 29 2013.

As you can see, the situation is the same everywhere - the Minister of Defense and the relevant Deputy Prime Minister are not invited to the meetings.
In this connection, the preliminary commentary on the issue of “state-defense” meetings by the press secretary of the Russian President Dmitry Peskov looked even more strange. He said that such a meeting in the coming days will become the norm, and that they will be attended by both Defense Minister Sergei Shoigu and Deputy Prime Minister Dmitry Rogozin. But, as we have already noticed, we were not present ...

The meeting held by the President and the Ministry of Defense itself, ignored the last news on its official website at the beginning of the Sochi meeting, the Minister of Defense 26 November took part in the Russian-Italian interstate consultations (with the Italian Minister of Defense Mario Mauro) in Trieste. And not a word about the consideration of problems with the implementation of state defense orders ...

Dmitry Rogozin 27 November informs readers of his microblog that quote: “Vladimir Putin is listening to general designers and military leaders” in Sochi, at the same time, for some reason without clarifying the reasons why he himself (Dmitry Rogozin) was not at the meeting.

It can be assumed that both Dmitry Rogozin and Sergey Shoigu eventually (after holding a meeting on the state defense order under the president without their participation) received all the materials in writing, in the form of, let's say, lengthy reports, and that all these materials were in front of others meetings, they will certainly study and draw the appropriate conclusions. But even if it was (will be), why is everything so complicated? After all, even in the most ordinary office, any meeting is held only when there is what is called a quorum and, most importantly, those who are directly in control of the situation and are responsible for solving the issues raised.

In other words, if it is discussed, for example, the question of how urban schools are equipped, then inviting separately the directors of these schools and the representatives of the teaching staff without inviting a person in the city administration in charge of the situation with local education is somewhat strange. No - you can, of course, discuss everything, having come to some conclusions and decisions, and without this official. But what will be the effectiveness of the decisions made in this case? Of course, it can be assumed that this official was unwell, and therefore he could not participate in the meeting, but in this case it would still be more expedient to wait for him to close the sick-list.

Although, according to available information, neither the Minister of Defense, nor in charge of military-industrial complex issues and the direct implementation of the state defense order, did the deputy chairman of the government go to the hospital. And if so, then what was their absence connected with, and how effective was the meeting under the president, which was held without their direct participation?

This question is indirectly answered by Vladimir Putin himself. He states that he would like to discuss issues related to the implementation of plans for the state defense order with the commanders-in-chief of the Armed Forces, commanders of military branches and military industrialists, hinting that he himself (without any intermediaries) is going to put together a base of opinions on the rearmament of the Russian army and draw your own conclusion based on these expert opinions. By holding meetings in this format, Putin demonstrates that he is not going to take up the situation with the course of modernization of the Armed Forces solely on the basis of reports that representatives of relevant government structures put on his table. What a sin to conceal, a considerable number of Russian citizens are well acquainted with how often the reflection of the situation in the reports of officials is far from the real situation. The majority of officials in our country are confident that their task is not to reflect the objective reality, but to report to their superiors without fail on the “successes”. If there is success, it’s excellent, and if there is no success, we’ll think it up, we concoct it ...

Putin made it clear that the notions, excuse me, “do not kill,” and that he himself will conduct a thorough monitoring of the situation with the state defense order. Well, at least I would like it to be that way ...

Is it possible in this connection to say that Putin does not trust those who are responsible for overseeing the defense order in the government? Well, here is the only way: trust, but verify. That, as they say, is ours.

By the way, 29 of November and Dmitry Rogozin and Sergey Shoigu still appear at the meeting with the president. Both the Deputy Ministers of Defense, the Minister of Industry and Trade Denis Manturov, and other members of the government appear here. Putin speaks to them as if he is trying to explain that the cunning will not work, that he himself, after a series of meetings, is aware of all the issues on the implementation of the state defense order, is aware of the real situation with the rearmament of the RF Armed Forces.

The conversation was principled and sometimes even, as they say in such cases, impartial, but we always proceeded from one thing only: from the fact that the assigned tasks should be solved, solved effectively and in the necessary time frame for the country.
We will continue to work in this composition in the future. I ask you, everything that we have agreed to bear in mind, we formalize all this in the relevant documents, where the performers and the deadlines will be named. Exactly in half a year we will gather and see what has been done, what has not been done and for what reasons.

PS The conversation was really important, but here are a few confused cooked wine bottles and wine glasses, lurking in the background - for officials of the Ministry of Defense. 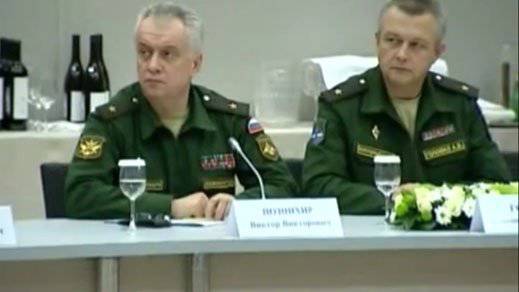 Let us hope that there is a reason for noting, and it is connected exclusively with the fact that the re-equipment of the RF Armed Forces is on schedule, and that the industrialists fulfill their obligations in full ... And maybe in such vessels there is mineral water (reserve) in case of dryness in the throat of any of the speakers ...

PPS The initiator of writing the article was the reader of "Military Review" E.S.Kulaga - a veteran of the Russian cosmonautics (certificate number XXUMX).