The nuances of army washing 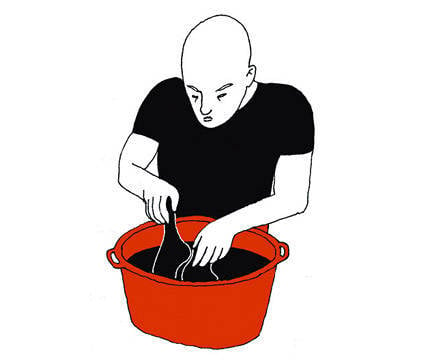 Laundry soldiers after the known changes in the reform of the Russian army are now engaged in civilian experts. Bed and underwear soldiers gather in a special storage room and once a week they either go to the “civilian” laundry, or the laundry is not created on the territory of the military unit, and civilian specialists are invited to serve it.
Today, in any laundry, it is important to use efficient equipment that will allow (hereinafter - the buzzword) to optimize the costs of washing clothes and lingerie. One of the types of such equipment is washer dryerwhich, as can be seen from its name, possesses a combination of two important functions — it itself erases and dries the washed laundry itself. Drying the laundry directly with the washing machine allows you to reduce the time it takes to deliver the laundry to where it will be used.
Modern young people of military age are often concerned about the question of how to be a soldier serving in conscription if his form is very dirty, because the soldier simply does not have a spare set. For many years, such a problem in our (Soviet, and then Russian) army was solved quite simply. If a soldier needs to be “washed”, then he goes to the foreman and asks him for the so-called “substitution”. The substitution is the same soldier's uniform, only it is far from new and was used, perhaps, by many generations of conscripts in this military unit. The substitution saves the soldier in the case when he needs to wash his own military uniform.
The substitution situation is extremely complicated if the washed form does not have time to dry, and the soldier needs to step in, for example, in a daily outfit. To stand "on the nightstand" in a washed-out and faded form, which in addition is also "worn" by soldiers of other appeals, will not work. For this, you can get a couple more out of order queues. In this case, there are several exits. The first is to put on a dry form, before trying to dry it with an iron; The second option looks more civilized. They are most often used by soldiers-conscripts.
Ctrl Enter
Noticed a mistake Highlight text and press. Ctrl + Enter
We are
The government of the Russian Federation is ready to set off work in military-industrial complex enterprises as military service for persons of military ageDo not want to serve - pay to the treasury!